12 QUESTIONS ONLY TO…
ERIC WIND

Eric Wind is the owner of WIND VINTAGE, a company dedicated to selling and buying exceptional vintage watches as well as providing guidance to discerning collectors of vintage watches. He previously served as Vice President, Senior Specialist of Watches for CHRISTIE’S, where he helped lead the sale of a number of important watches. While at CHRISTIE’S, he helped with the curation and marketing of the OMEGA SPEEDMASTER 50 auction that took place in New York in December 2015. It was a notable auction that helped continue to drive interest to vintage and modern Speedmasters.

My first watch was a vintage G.I. Joe watch made by ARMITRON. While I don’t think I have that one anymore, I have looked for years and, thanks to the inspiration of my friend Justin Vrakas, I was recently able to find and purchase a New Old Stock, New In Package one on eBay. I was shocked and thrilled when I saw it! 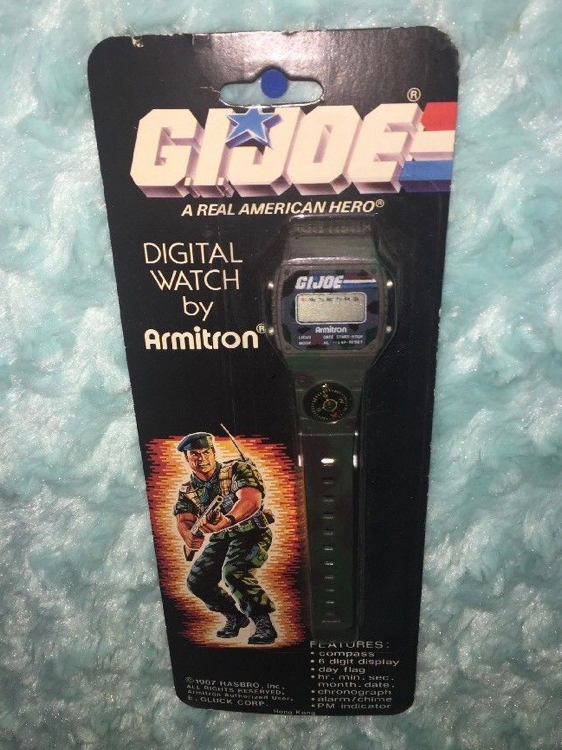 The first two for me are the OMEGA Speedmaster and ROLEX Submariner. For number three, I have a very time deciding between the CARTIER Tank and the JLC Reverso. I guess I would call that a tie. Honorable mentions go to the AUDEMARS PIGUET Royal Oak, PATEK PHILIPPE Nautilus, and HEUER Carrera.

I was proud to be a part of the “OMEGA Speedmaster 50” auction at Christie’s in 2015 and to travel to a number of OMEGA boutiques across the United States to show the watches we had in our auction and share my passion for the Speedmaster. It was the first thematic auction and evening auction that Christie’s did in New York. That auction and the scholarship around Speedmasters, particularly the book MOONWATCH ONLY, helped people begin to really understand and appreciate the small nuances of Speedmasters and exposed them to a broader range of collectors. Of course, it was also exciting to be able to sell the Speedmaster formerly owned by the astronaut Ronald Evans, which is the only privately-flown Speedmaster to circle the Moon.

I enjoyed seeing how much the Speedmaster resonated with the people at our events. Some of the people I spoke with remembered first learning about the Speedmaster around the time of Apollo 11 while others learned about it through watching movies about the space program, such as “Apollo 13”. Of course, two years later, I now look back at the “Speedmaster 50” auction and see that some of the outstanding watches sold inexpensively compared to today! It has been neat to watch the development of the Speedmaster market.

A funny anecdote is that at that time, I was between Speedmasters and no longer had one in my collection, so I traveled the country wearing a vintage Seamaster. Fortunately, I later found another vintage Speedmaster to add to my collection. 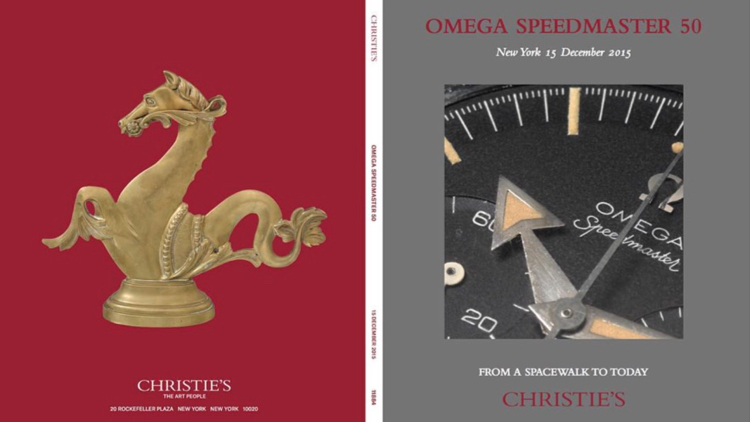 I am much more a fan of vintage watches than modern watches. I love the history of these watches between the company and the individuals that owned them, the unique aspect of how each ages with time, and the rarity in finding those in good condition. I guess that passion for vintage watches is reflected in the name of my new company: WIND VINTAGE.

They saved astronauts’ lives in outer space, have a rich history, are true tool watches, and look great on the wrist.

My favorite Speedmasters are any of them with the calibre 321 movement. It was my first love and obsession when I began learning about them years ago. In terms of specific references, I actually have settled on two favorites: the reference 2998-1 and reference 105.012. I love the 2998-1 reference because of the elegance of the hands, case, and dial. It is such an interesting watch that I have learned to appreciate more as time has passed. I also love the reference 105.012. I find the Professional cases to wear better and more comfortably on my wrist than the straight lug versions, I guess because of the shape of my wrist. I prefer the reference 105.012 as I prefer the more elegant central seconds hand to the more aggressive appearance of the straight central seconds hand we begin to see on the reference 145.012.

It sounds a bit clichéd to say a watch or Speedmaster, so instead it would be a stack of great novels and books that I would like to read, but have not had time to tackle in the past.

I do not buy lottery tickets, but if I won the lottery I would first donate a significant portion to our church and other charities and then start hunting watches.

I would be very interested to go back to the time of Jesus Christ in Israel to see him and listen to him.

I would guess I glance at my watch over 20 times per day, probably about half of those times to just to look at the watch and not to ascertain the time.

A watch that may be of interest to the readers of this blog is this Speedmaster reference 2998-1 that I was fortunate enough to purchase from a small estate auction outside of New York City. It was found a garage by people cleaning out the house of an elderly woman and consigned by her to auction with a starting bid of $500. The watch has the most attractive tropical dial I have ever seen on a Speedmaster and is unpolished.

I was even more ecstatic when I learned from the OMEGA Archives that the watch was originally supplied to a United States Army base and I learned that this lady’s late husband served in the military. I have the gentleman’s name and have learned some additional information about his time in the service. In addition, it is unusual that this watch has a dial that is correct for later examples of the reference 2915, making this a transitional watch. I have always loved the Oval “O”, so find it amazing to see it on a 2998. To see the watch also come with its original bracelet, is just amazing. I just had it serviced and it is running as beautifully as the day it was delivered to a United States Army base in December 1959. 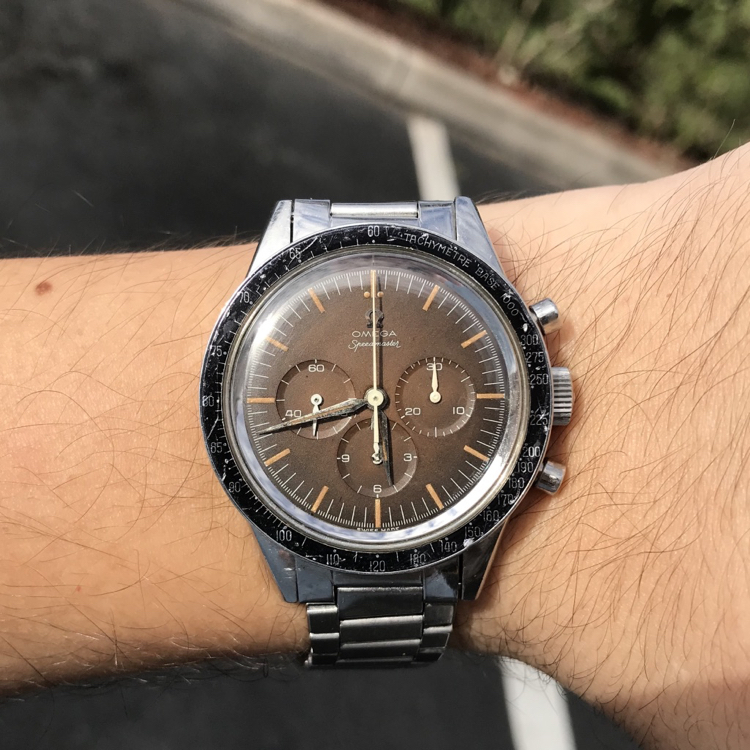 A Speedmaster reference 105.012 that I recently purchased. It came from the original family in Sweden and I love the look of it, particularly the faded Dot Over 90 bezel, and the fact it even has its original crystal. These watches are so easy to wear and enjoy. Examples in good, original condition are still extremely undervalued in the scheme of the market. 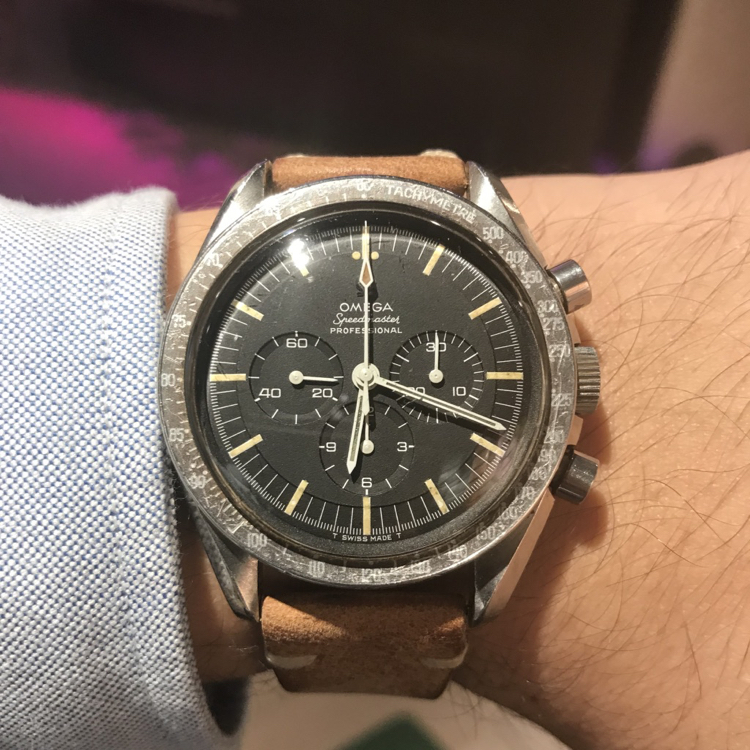