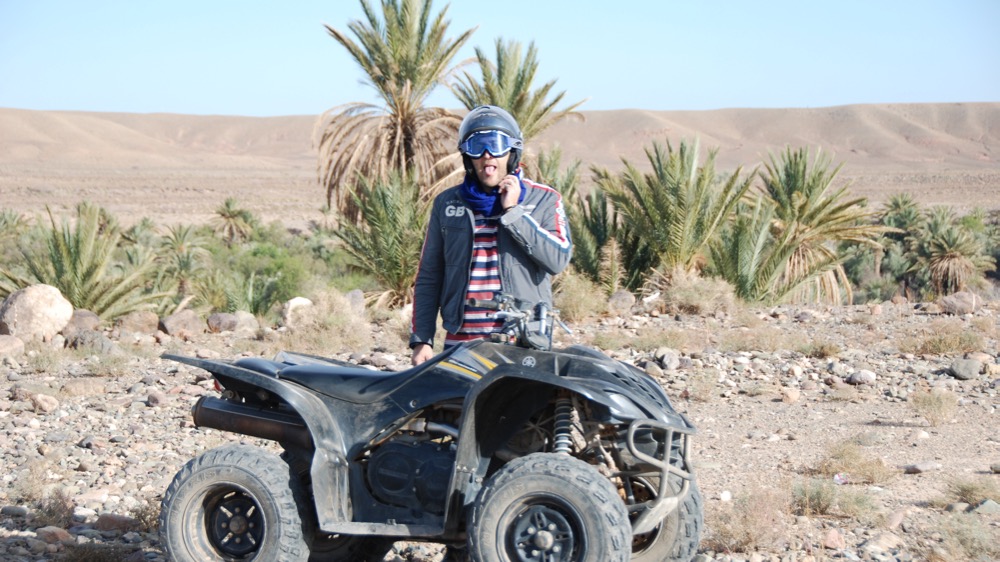 12 QUESTIONS ONLY TO…
JEAN GUILLAUME COUDON

Jean-Guillaume is a finance manager and has been living in Gabon for the last 13 years. He comes from a family where an engine is considered as a piece of art. We have heard about some Aston Martin and other great cars that have been (or are still) owned by JG’s parents, but we won’t write about them here for privacy reasons.

Although he has always had a “nice” watch on his wrist, he really started his collection about 7 years ago. Born in the 70s, he is very attached to this period whereas it is musically or mecanichally. Therefore his collection is centered on chronographes and diving watches from this era. His very first Speedmaster was a Mark II… Nowadays he owns a few more… He is a member of Passion Horlogère, a well-known French watch club, and has written a few articles and reviews on their website.

I do… Except I’m not sure about the brand. I think it was a Lotus. I’m sure it was waterproof enough to dive as I was spending my whole summer spearfishing since I was 10. I remember that the crown was a little too prominent and as I was very active as a kid it was always “digging” in my left hand. I therefore started to wear my watch on my right wrist and I am still doing it today.

There are a bit more than just three… But it seems like you’re going to force me to choose.

ROLEX Submariner. Even if I don’t like it, it’s probably the watch that everybody would recognize, not mentioning that it’s also probably the most copied shape and face… And did I say, the first James Bond watch? Or did I mention Comex? Well you pick up your favorite reason but it has to be there, in the three most iconic watch models!

JAEGER LECOULTRE Reverso. Why this one you would ask me? Even my wife knew about the Reverso and that should tell you a lot! Still produced since the 30s, can you be more iconic than that? Yes nowadays, we see a lot of new-vintage re-editions but that watch has been produced non-stop since the 30s. Not many watches can claim the same, so definitely top three material here!

With this choice of three, I have a chronograph, a dive watch and a dress watch, so we should be ok.

Because “someone” (he will recognize himself) had introduced me to Speedmasters years ago, I was already owning two when I was roaming the internet looking for my third one: a 376.0822 aka the “Holy Grail”.

One day, I found one at a descent price from an Italian vendor and immediately send an email to this same “someone” who knew much more about Speedys than I did. This guy has become a friend over the years and I will trust his advice on any Speedy any given day… He usually replies quite fast to my emails but on that day, I got no reply. I knew that this model was pretty rare and that I would probably lose the sale if I was not quick enough so I was starting to get a little bit nervous. After a couple of hours, I decided to talk directly to the vendor and asked him to keep the watch for me until the end of the day. I finally reached my friend, who had been involved in meetings during the whole day and did not see anything of cours. He told me he would have a look and get back to me asap. A few hours later, he called me back: “Sorry mate, the watch was great indeed but it has been sold already…” Whaaaaat????  You can imagine that at that point I was not very positive about the vendor who did not kept the watch as promised…

A week before my wedding, my wife invited me to a very nice restaurant near Nice for a last romantic and relaxing dinner before our wedding day. At the end of this delicious moment, while I was enjoying an old Cognac and a good cigar, my beloved future wife took something out of her handbag… Yes, you guessed correctly, it was that Holy Grail that I had missed in May. It turns out that my wife had contacted my friend at the beginning of the year and asked him to help her finding a watch I would love as a wedding present. That is why as soon as he read my email in May, he contacted her to validate the choice and then “robbed” the watch from me! He knew the vendor and explained him that at the end I would be the final owner of the watch. 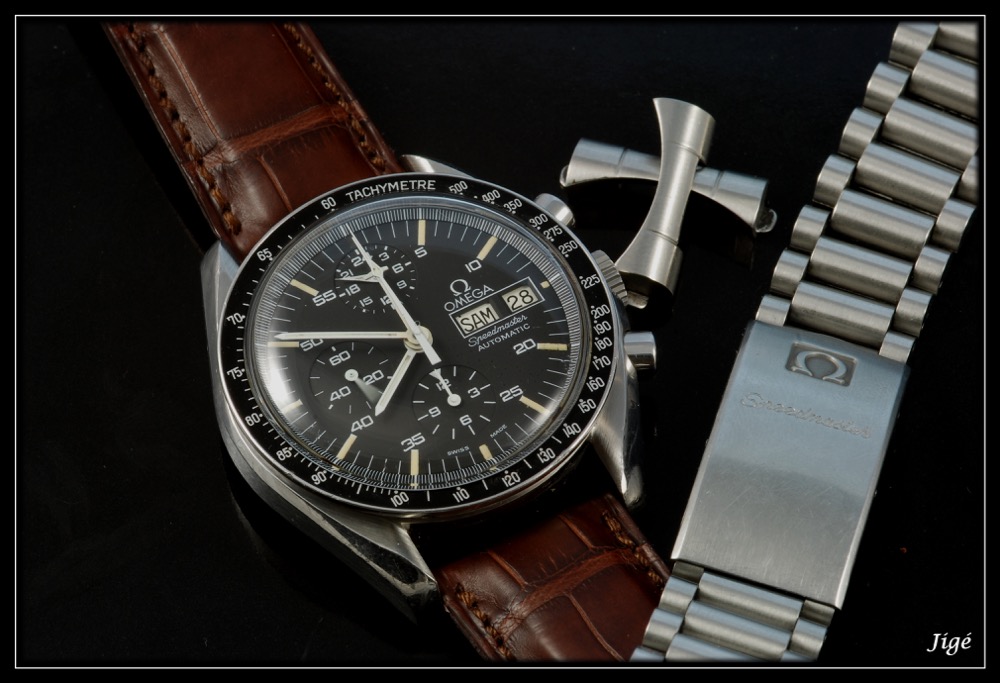 Vintage, definetely vintage… Although the recent neo-vintage avalanche is interesting for some watches, there is nothing like the patina of tritium indexes and hands… And to be honest, I’m in love with the 70s designs …

… because it’s one of the most balanced watch I have ever seen. The shape of the case, the design of the dial, the contrast between the white hands and the black dial… Everything on this watch just makes sense. It is just perfect! Don’t get me wrong, I have other models and other brands that I own and love too but when I wear one of my Speedys, as I contemplate it on my wrist for a few minutes, I am always mesmerized by the sheer perfection of this watch.

This time I refuse the limitation… I have three favorites and it’s my 1987 trilogy: 345.0808 (first see-through case-back with red gold plated 863), 345.0809 (first moonphase Speedy) and 376.0822 (first automatic caliber in a Moonwatch case). I have three other Speedmasters and I do love them, but these are just the ones I put above all else. 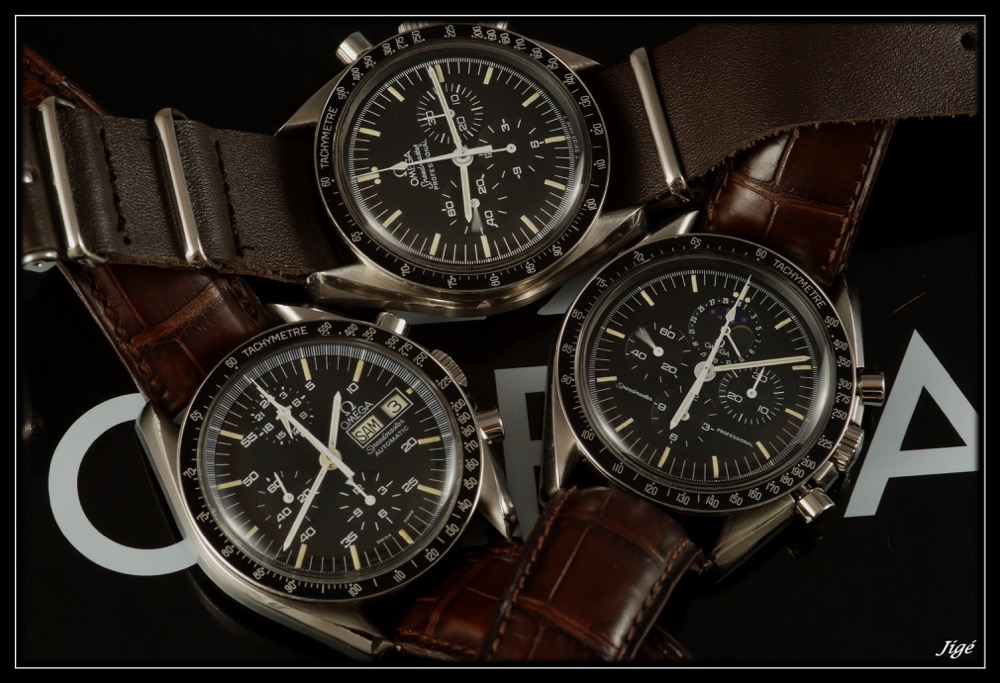 My phone… not to call anyone – that would be stupid – but because my whole music collection is there. Imagine, being on the Moon, looking at the Earth listening to Pink Floyd…

Financial advisor? LOL. The guy roaming roaming auction sales looking for an Aston Martin DB4 or DB5? Yes, that guy would be me!

This is a very tricky question as I live in central Africa and having a teleporter would be just incredible… Probably, I would wait a few days and then I would teleport just at Le Mans a few seconds before the 24 Hours race starts!

Too many… Is that a good answer? Or maybe not enough yet? I feel naked without a watch on my wrist so not only do I need to feel it there, I also need to see it… a lot. Yes, that is my answer: a lot!

The last one I bought is an AQUASTAR Seatime a few months ago and the last one I got as a birthday present (a few days ago) is a Speedmaster Dark Side of the Moon. 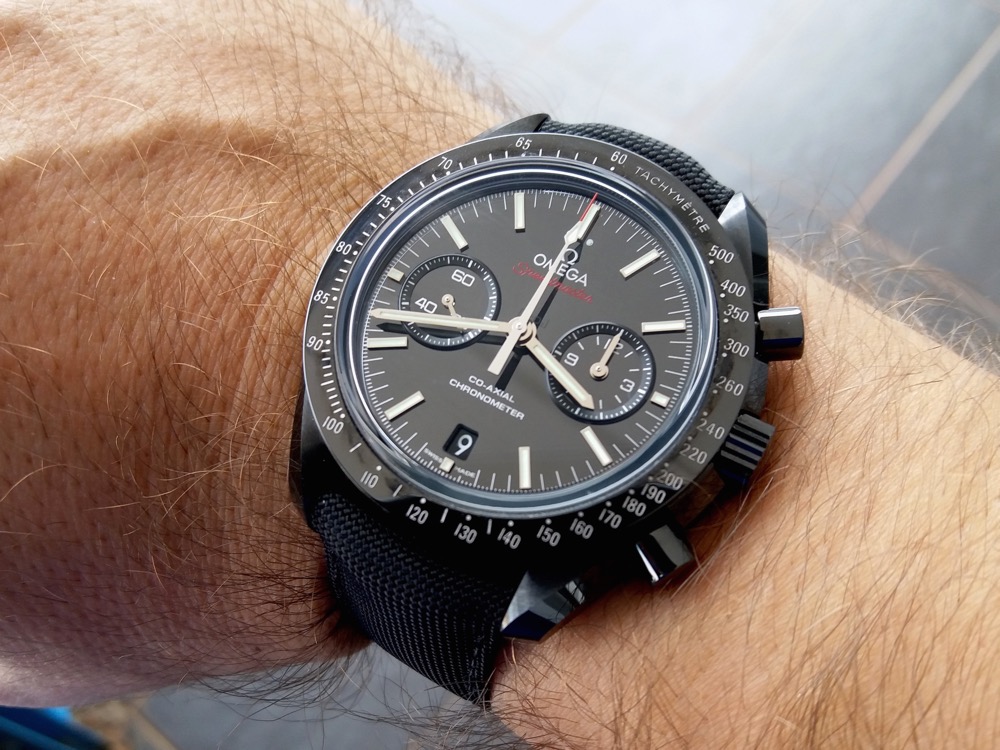 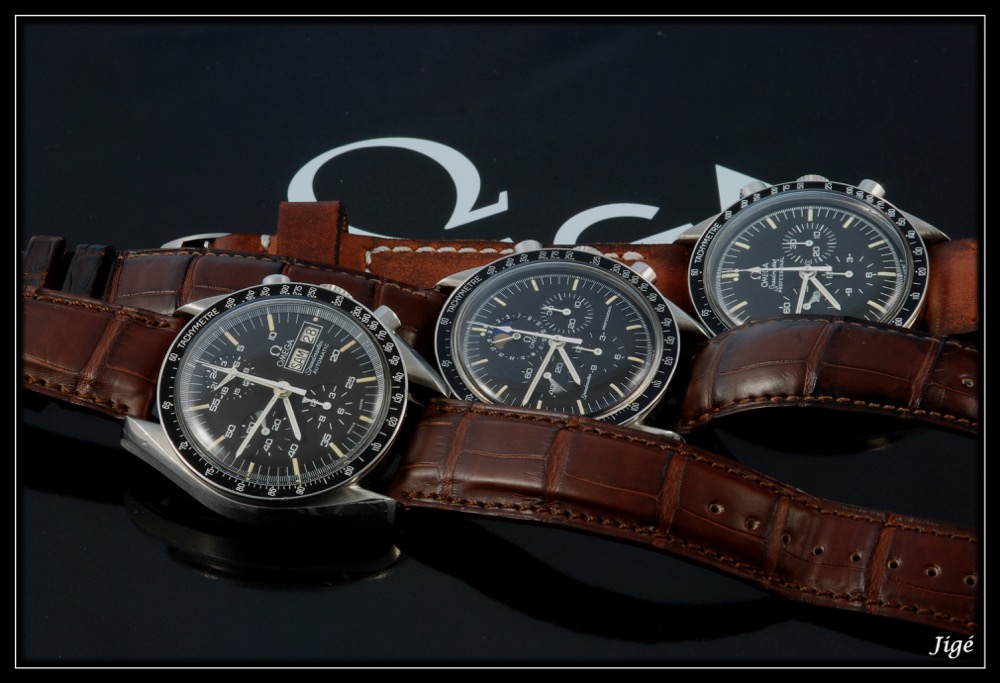