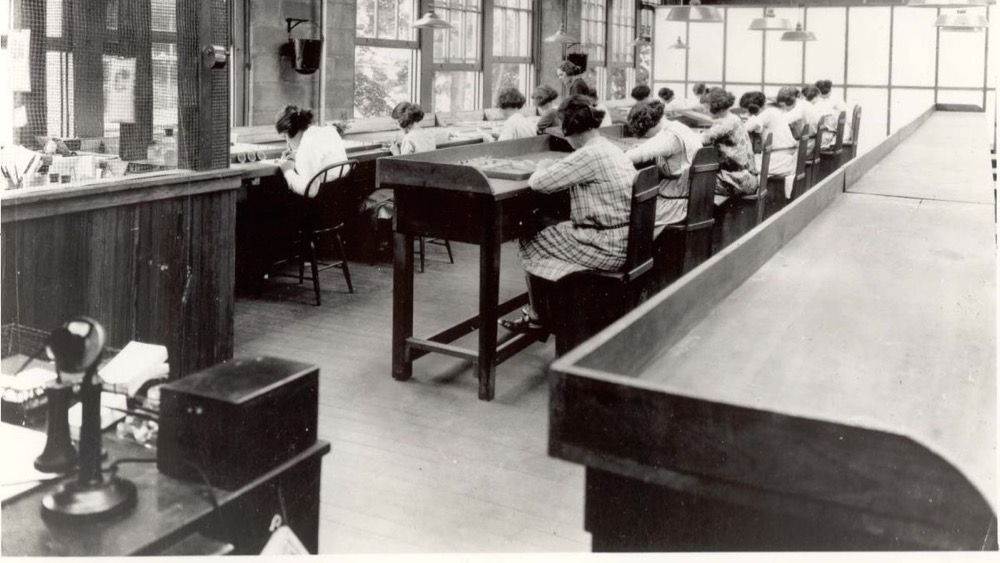 Phosphorescence has been known for centuries and several pigments had been identified by the start of the 20th century.

Here is a brief overview of the different techniques that have been used for Speedmasters dials from 1957 until these days.

Using radium as the source of energy seemed the ideal solution…

A few years after Pierre and Marie Curie discovered radium in 1898, the first radioluminescent paints were produced and applied to the hands and hour markers of watch dials. They combined phosphorescent pigments, usually copper-activated zinc sulphide (ZnS:Cu+), with radium, an almost inexhaustible source of energy that gave off permanent light. This innovation proved very useful to soldiers in World War I.

However the radium paint had to be replaced every few years because the radiation damaged the phosphorescent pigments. Furthermore its radiation was also extremely harmful to those who applied the radium paint to the hands and dials. The “Radium Girls” became its prominent victims. For these reasons the use of radium was diccontinued in the early 1960s.

Speedmaster dials containing radium were made until 1961/62. The last sub-reference for which we measured radium on a Geiger counter was 2998-4. 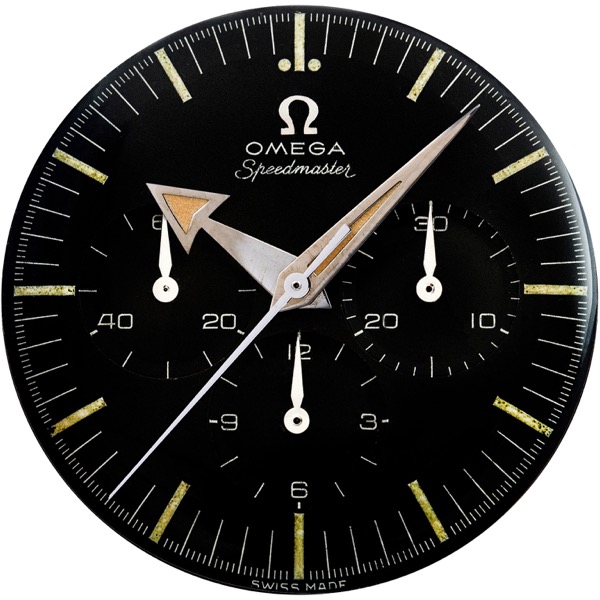 The application of tritium instead of radium was patented in June 1956.

This source of energy is far less dangerous than radium: low-energy beta radiation unable to penetrate a watch glass, and a much shorter half-life of 12.32 years.

Interestingly, tritium dials produced between 1962 and mid-1964 did not have the T marking on either side of SWISS MADE to indicate its presence. 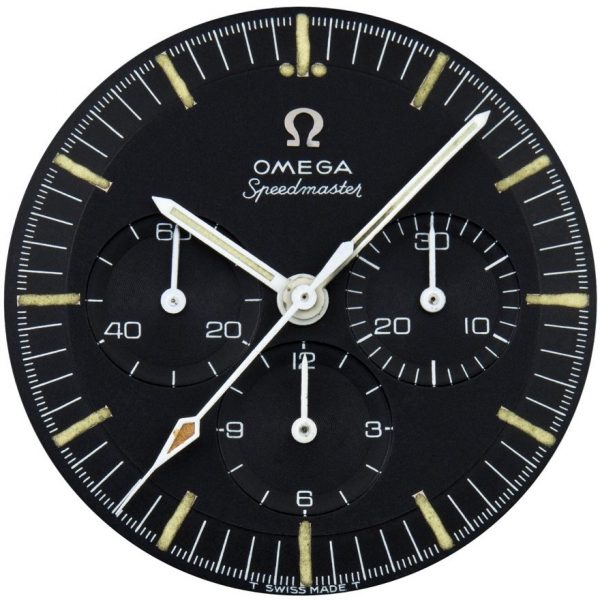 The T indication only appeared in 1964 following a Swiss interior ministry ruling from October 1963 on radiation from luminous watch dials. It required indication of the presence of radioactive substances and set forth a table of radiation limits, which came into force on January 1, 1964. However it made allowances for special-purpose timepieces, diving watches for example, in which higher levels of radiation were tolerated.

From July 1, 1964 manufacturers were only allowed to sell watches complying with the regulations governing the indication of tritium on the dial.

In the OMEGA archives, an internal memo dated June 1964 states that suppliers have been notified that from April 1, 1964 all luminous dials arriving at the factory must be marked with a T, and that from October 1, 1964 all unmarked dials have to be removed from the watchcases to have the countermark added or to be replaced. The dials with asymmetrical countermarks were thus very likely originally produced without the Ts, and were subsequently made compliant from April 1964 for unfitted dials and from October 1964 for dials that had already been cased-up.

The latest point would explain the dials from that transition period observed with Ts that are not the same distance either side of SWISS MADE, being offset to the right (confirmed by Jean Singer & Co.).

To sum up, we can observe 3 types of “SWISS MADE” inscriptions on tritium dials:

depending on their period of production. 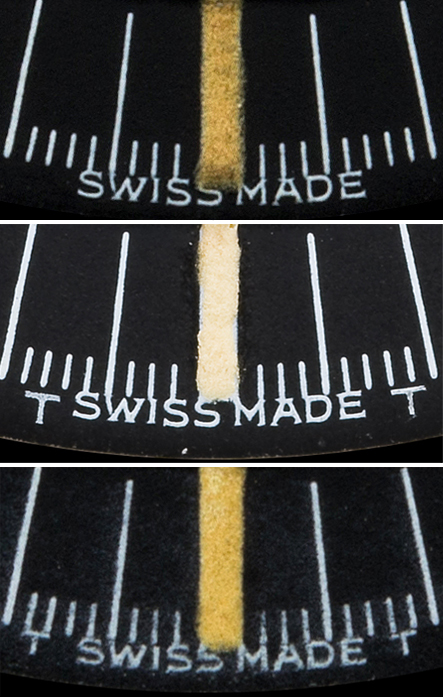 In 1995 a Japanese company put on sale a new phosphorescent pigment (an aluminate of strontium) called Luminova.

The Lumi-Nova® (generally called Luminova) takes a whole night to return to its ground state and thus made radioactive sources of energy redundant. This pigment draws its energy from light and thus needs recharging. If the pigment has been kept in the dark for a long while, it will remain inactive unless it is exposed to light. The color of the hour markers is white while the glow of the phosphorescent pigment is also in the green spectrum, like the tritium paints.

For the Speedmaster, this new material supplanted tritium in 1997. 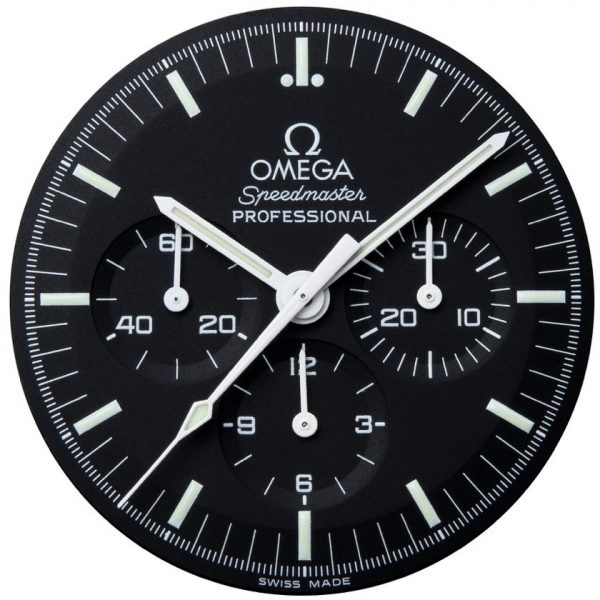 If you have a UV lamp, you just need to expose the watch to the UVs for a few seconds and turn it off (preferably in the dark). The intensity and duration of light emission will tell you if it’s tritium (weak and short emision) or luminova (strong and long emission).

2. Test without a UV lamp

It is based on the different lengths of time the pigments take to return to their ground state. The photoluminescent pigments of luminova paint are charged only by light, while the tritium and radium paints are also charged by the radiation from the radioactive elements in the paint. With age, this is very likely that the pigments mixed with radium are no longer active due to their permanent exposure to the latter. The experiment relies on empirical observation and is only indicative. It becomes more precise in a comparative test of watches with each type of luminous paint.

Leave the watches for at least 24 hours in total darkness, ideally in their box, to allow their light to fade.

Open the box in a dark room after allowing your eyes to become accustomed to the darkness. There should hardly be a glow and only for the more recent tritium dials. The theoretical half-life of tritium is 12.32 years, but in practice it is estimated at nearer five years because some of the tritium is dispersed when the paint degrades.

Switch on the lights for two to three minutes.

Switch off the lights. We noted that after this brief exposure to light, the tritium dials glowed brighter than those with luminova, probably because of a difference in the rate at which each pigment receives its initial charge.

Switch on the lights for 10 minutes.

Switch off the lights. Now the luminova should glow brighter than the tritium.

After around 10 minutes in darkness the luminova is still emitting strong light, while the tritium fades as quickly as it appeared. Its zinc sulphide pigment will only give light for a few minutes in the absence of enough radioactive power.

After about 25 minutes, there is no sign of light from the tritium dials.