Italy has always been a particularly important country for OMEGA.

The first commercial initiatives of the brand in Italy go back to the beginning of the last century, when the Maison Louis Brandt & Frères entrusted to a certain Luigi Cesare Tallia the distribution of his watches for the North of the country, while the South was already managed by the Bandiera & Bedetti company in Rome.

In 1921, when Luigi Tallia teamed up with the Turin businessman Roberto De Marchi, he became responsible for the whole distribution of OMEGA watches throughout the country: this is the beginning of the long and prolific collaboration between the headquarters in Bienne and what will become the famous Fratelli De Marchi company in Turin.

The Fratelli De Marchi company has been managed by several important figures from the region (for example, Professor Arrigo Bordin, who held the Chair of Political Economy at the University of Turin, and Gian Maria Vitelli, President of the Chamber of Commerce of Turin), but it is clearly Carlo De Marchi, an enlightened businessman and passionate about the new advertising and marketing techniques that appeared during the 60s and 70s, who allowed OMEGA to experience an incredible boom at that time.

Carlo De Marchi organized the development of the OMEGA (and Tissot) distribution throughout the country, through several local subsidiaries, a chain of local stores (the Rocca stores), and thanks to numerous initiatives (he organized a congress of more than 550 Italian retailers in Bienne in 1963, an incredible exhibition “Time and Space” in 5 Italian cities in 1967, and had one of the first IBM computers installed in Turin in 1964 to manage deliveries and guarantees of the watches).

This is undoubtedly one of the reasons why the OMEGA brand has long represented a privileged name for watch lovers in Italy (and we all know Italians have always been great connoisseurs and collectors of watches).

This exclusive collaboration with the Fratelli De Marchi company will disappear in the late 1970s when OMEGA gradually regains control of its local distributors. However, De Marchi will have heavily marked the history of the brand in Italy, and especially for the Speedmaster. It is also De Marchi who is at the origin of the famous Apollo-Soyuz model in 1976, which was the very first limited series in steel in the brand history. 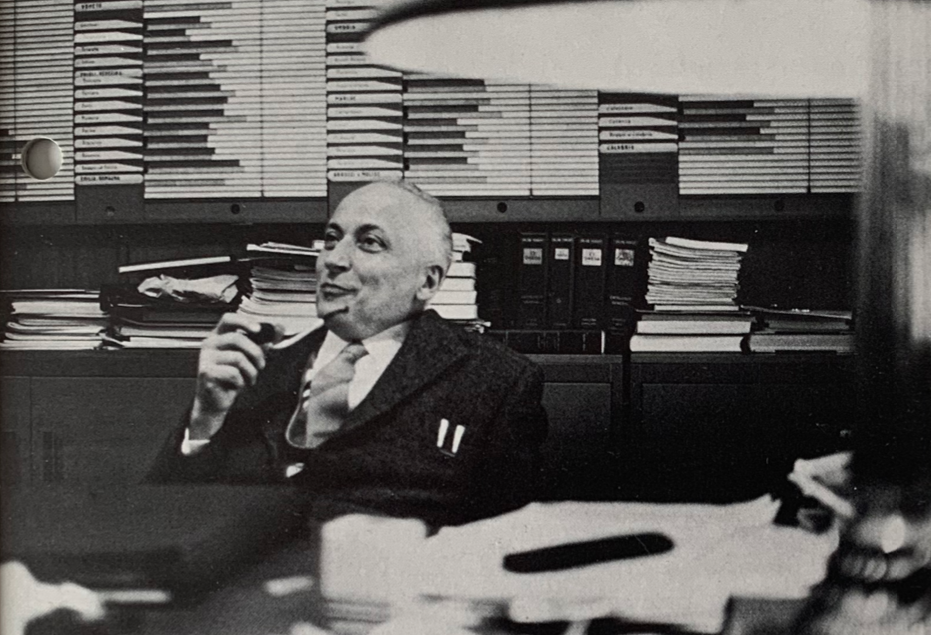 In the mid 1980s, the Italian market (and maybe the international market too) was not so easy for the Speedmaster, and the local Sales Director was continually looking for new sales. That is the reason why many local marketing initiatives were suggested by the Sales Department of SMH Italia. Those ideas were proposed to the Headquarters in Switzerland, and once accepted, the whole execution was then operated and organized directly in Italy by SMH Italia. 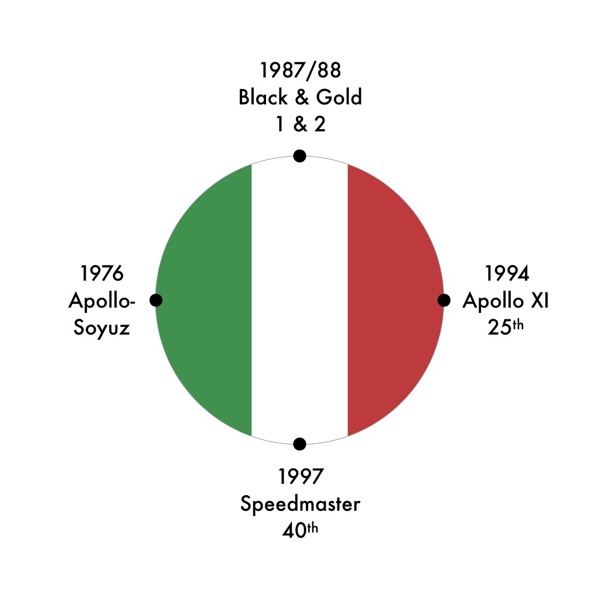 To mark the historic event of the common mission between the American Apollo and Soviet Soyuz spacecrafts in 1975, OMEGA’s exclusive distributor in Italy, the De Marchi Company in Turin, sold a limited edition of Speedmasters a year later. It is generally acknowledged that the production volume of this series was 500 units, all for sale in Italy, which is consistent with the letter I engraved on the casebacks of these models. We have no evidence of this production number, and although we did manage to find delivery invoices for 400 Apollo-Soyuz watches to De Marchi, we found no information about any extra copies.
This first limited series in steel has a number of specific features:
– a special dial, decorated with the mission badge at 12 o’clock in place of the usual Speedmaster and Professional,
– the main hour markers going through the minutes track as in the 1960s models,
– a special caseback with a bas-relief of the Saturn 1B rocket against a map of the world,
– a limited-series number with the letter I on the flat of the caseback (the engraving is so fine that the number becomes virtually indistinguishable to the naked eye after almost 40 years of wear),
– 5.5mm instead of 5mm-diameter pushers,
– modified caseband to accommodate the wider pushers,
– a special 1168/633 bracelet with links of an unusual design.

Note:
Some of the watches observed have movement numbers of around 31.xxx.xxx or 32.xxx.xxx, corresponding to older movements. The movement numbers of these atypical examples have been listed by OMEGA as fully assembled and delivered standard models (classic 145.022s). For this reason, such “anormal” Apollo-Soyuz watches are not considered as original by OMEGA. At this time, there is no clear explanation about their existence. 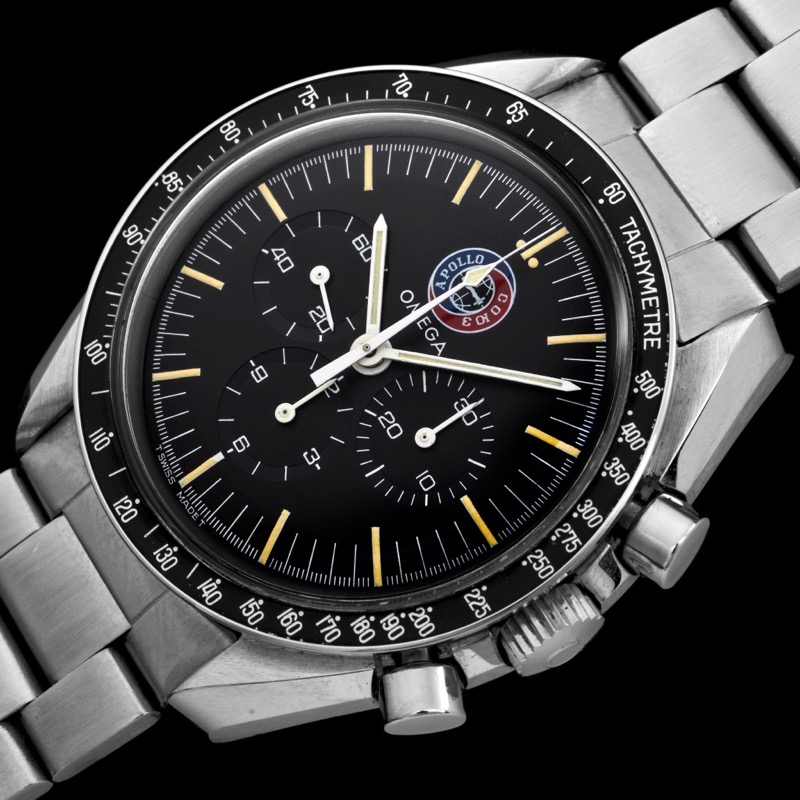 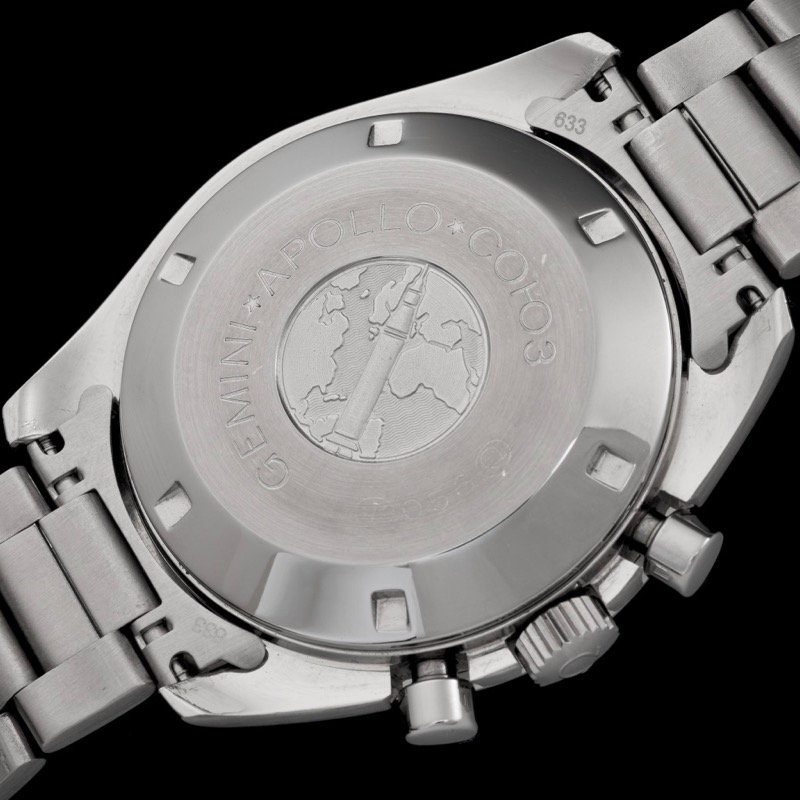 Numbering: Axxx / 500 on the caseback bevel.

Note:
In addition to the Moonwatch, 200 pieces of the Speedmaster automatic day date, reference ST 376.0822 known as the Holy Grail, were modified in 1988 with the same touches of yellow gold. 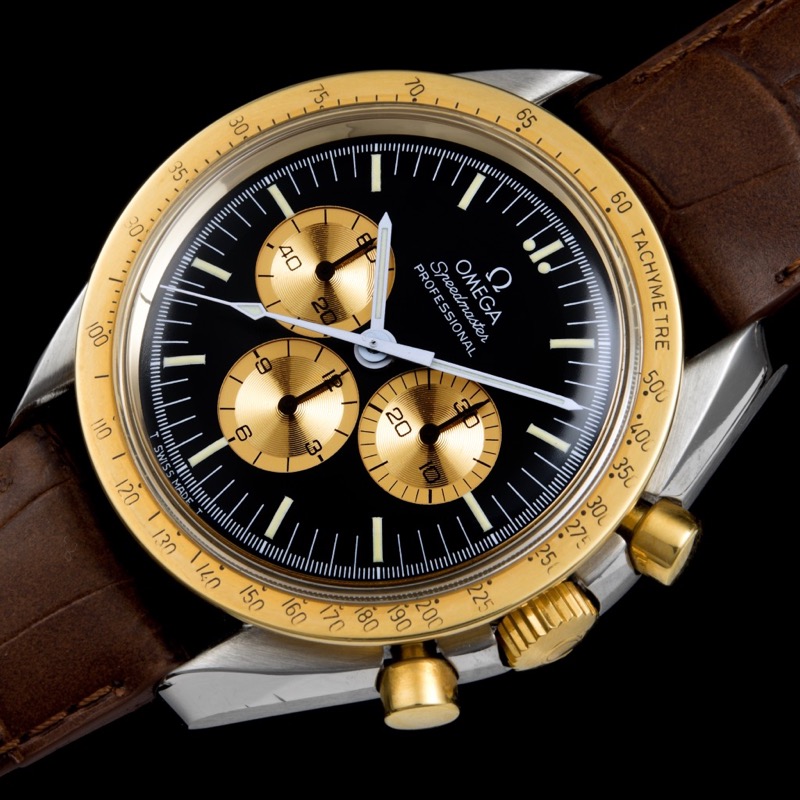 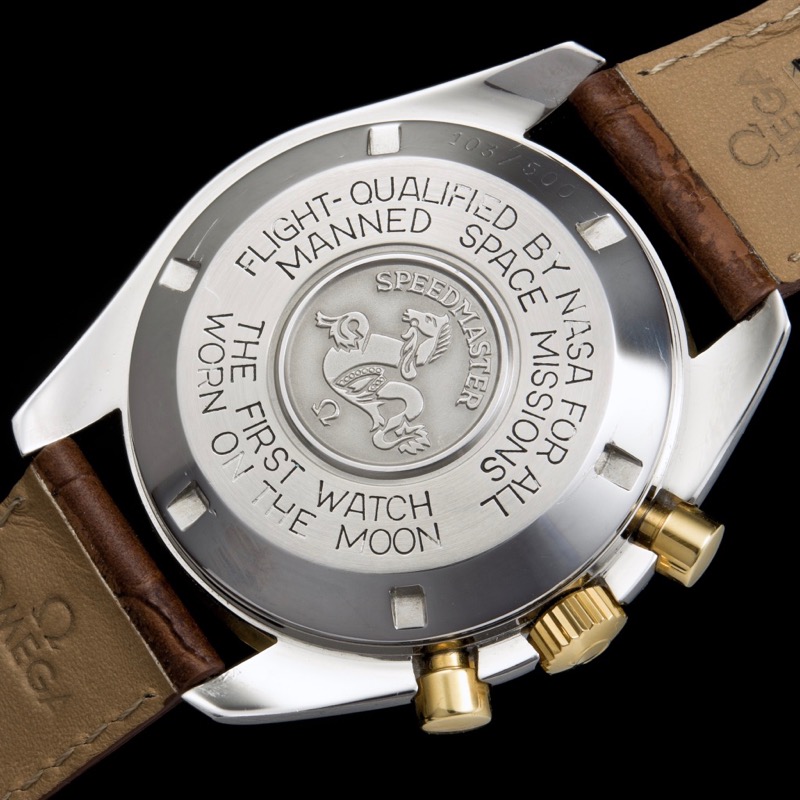 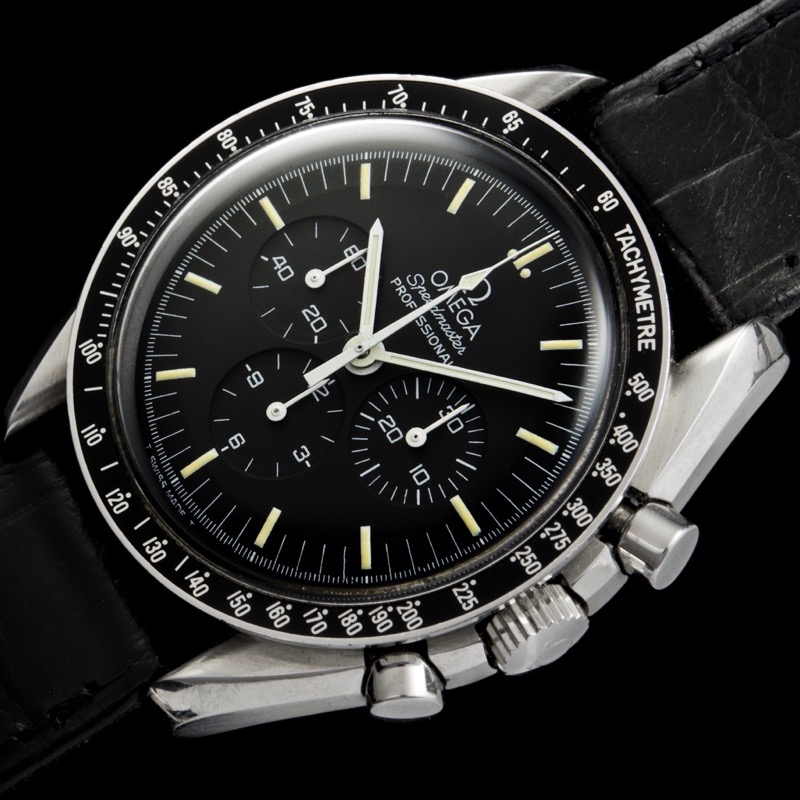 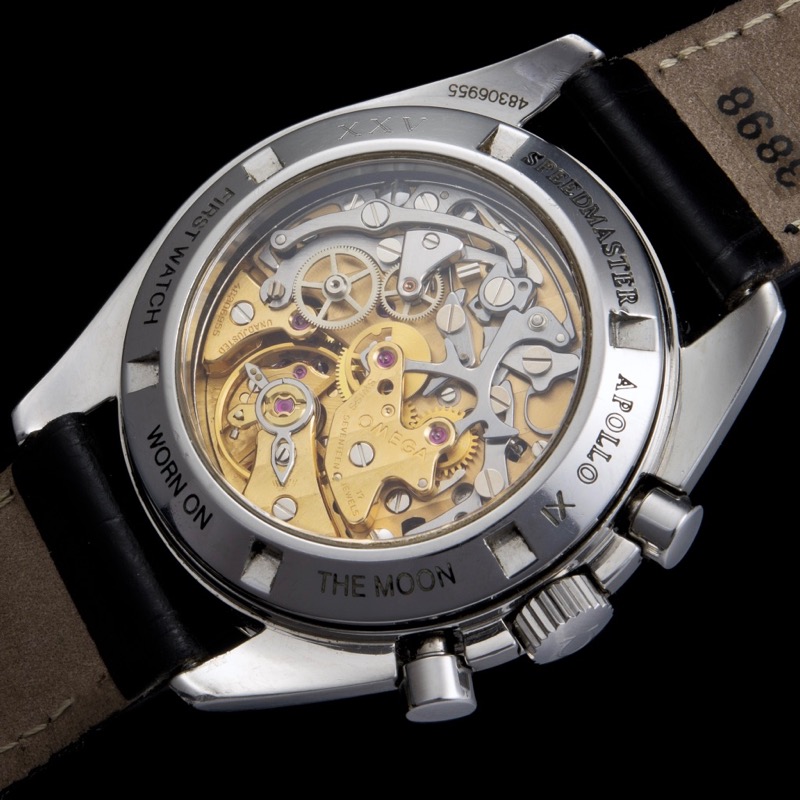 To celebrate the 40 years of the Speedmaster, OMEGA launched a limited series of 500 watches for the Italian market in 1997.
This model featured a cream-colored dial, a caliber 1863 movement and a sapphire-crystal caseback.
The front glass was also in sapphire crystal, which was unusual for the time because the normal luxury models were only fitted with such glasses in around 2002 on the PIC 3573.50 model.
It was also one of the first series with luminova hands and dial.
The watch was presented in a black leather box with a limited-series certificate in Italian. This model is popular with collectors. 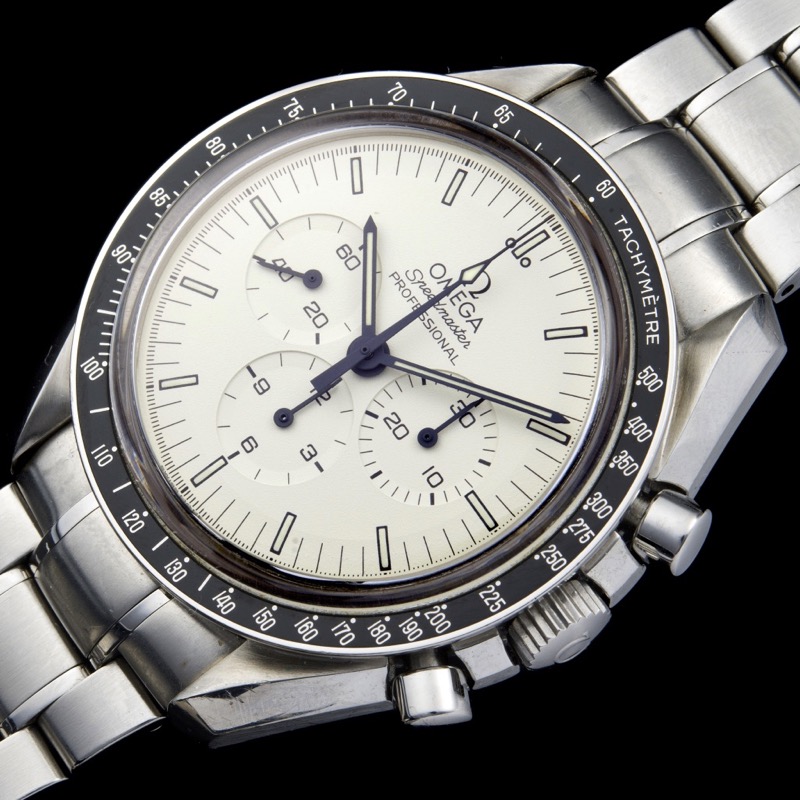 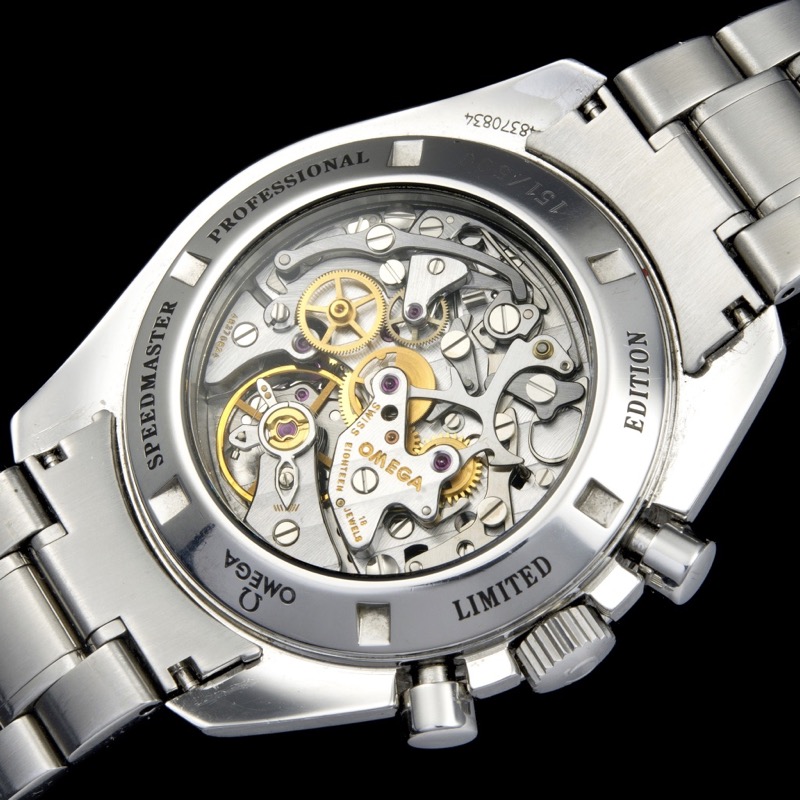