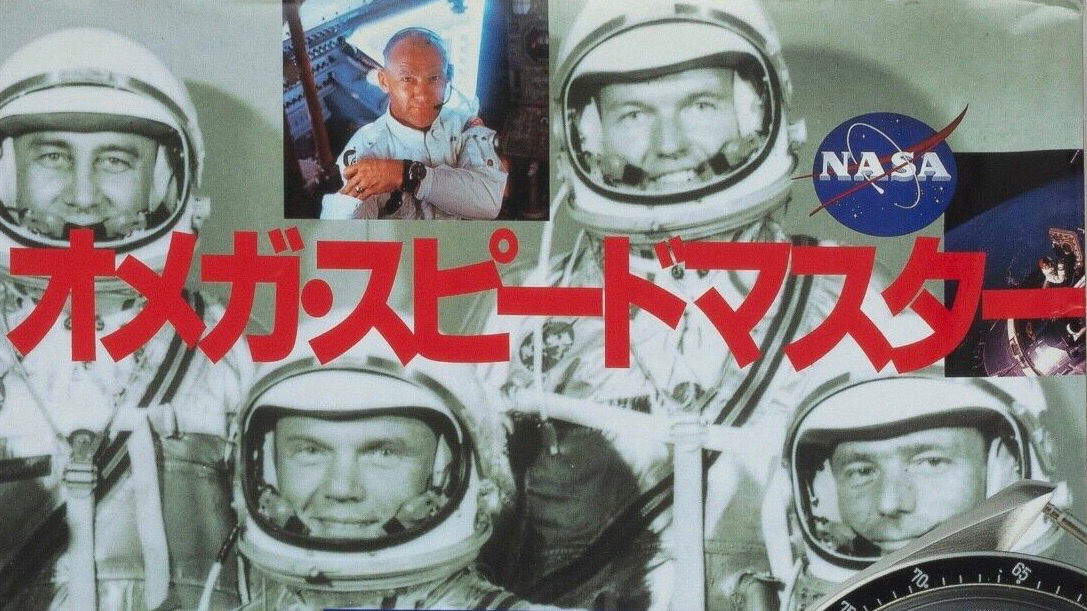 Japan has always been a very important market for the Speedmaster. This is probably the reason why, as for few other European countries (Italy, Germany), Omega has repeatedly chosen to produce limited series of Moonwatches exclusively for this country.

These limited editions are often very popular with international collectors because of their rarity (some models have been sold to very few copies), their particular design, and also the fact that precisely they have been products only for a specific market. In this regard, it should be noted that when purchasing these models, it is essential to check the documents accompanying the watch, which must include, in addition to the reference and the serial number, the mention of the watch store and the corresponding country code (5340 for Japan). This is the reason why it is probably preferable to favor purchases of “full sets” for this type of series. It is indeed quite easy to find spare parts today (such as dials for example), and recreate a “Japanese” model starting from a standard Moonwatch is not so complicated … but of course , the value of an original watch is not the same as a franken watch.

A year ago, in July 2018, Omega announced the release of new limited series of Speedmasters for Japan, to celebrate (with 2 years in advance, as often by the brand), the next Olympic Games in Tokyo in 2020. These 5 new series are available either individually (2020 pieces) or in an exclusive box containing the 5 models.

This is an opportunity for us to review all the limited editions marketed only in Japan by Omega since the very first one in 1997.

TWO EXAMPLES OF THE JAPANESE PASSION FOR SPEEDIES

The Return of Ultraman.

At the beginning of the 1970s, Eiji Tsubaraya produced the Japanese science-fiction TV series “The Return of Ultraman”. Tsubaraya was himself a watch enthusiast and more specifically a Speedmaster lover, and some characters of the series can be seen with Omega Speedmasters on their wrists.
These Speedmasters had an orange-red chronograph second hand, and collectors gave them the nickname “Ultraman”. Actually Omega produced a limited volume of such special models in the late 1960s, distributed not only in Japan but all over the world.
We did a specific review of these models here. 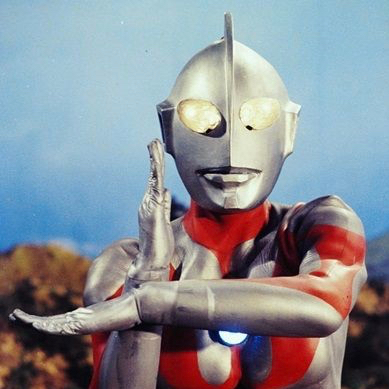 In 1998, Kesaharu Imai wrote an amazing book dedicated to Speedmasters, considered as the most comprehensive work about this watch at that time: “A Time Capsule, Omega Speedmaster, The Story of the First Watch in Outer Space”.
This book has been translated into English and both editions are now sought after by collectors. 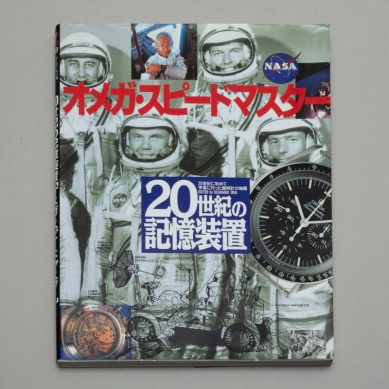 Numbered series of 40 watches
(xx/40 on the caseback bevel)

This yellow gold model is little known since only 40 were made in 1997. The silvery-white dial with a black minutes scale and subdials recalls the face of a panda.
Its dials perhaps inspired the OMEGA designers when they conceived the Speedmaster Automatic Racing Michael Schumacher in 2004, and also the recent First OMEGA in Space SednaTM Gold and CK 2998 2016. 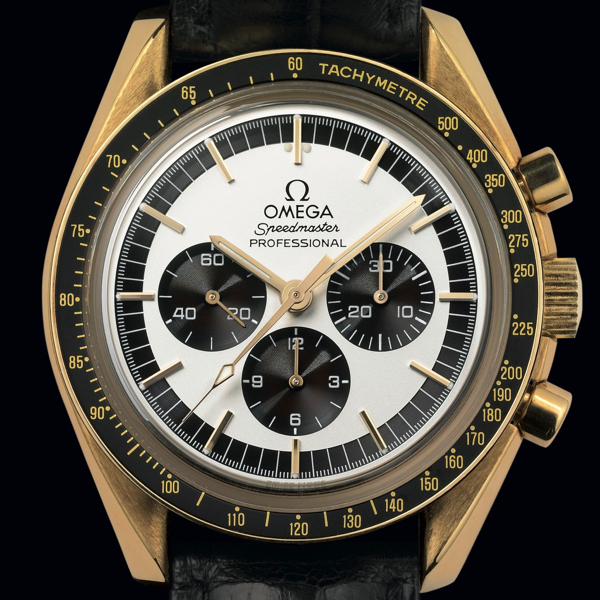 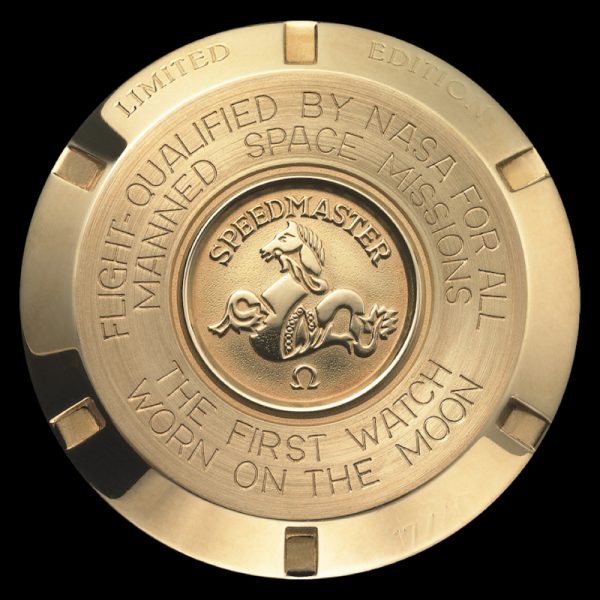 In 1999, OMEGA produced a numbered series of 1’999 watches dedicated to the manga Galaxy Express 999, created in the late 1970s by the manga artist, Leiji Matsumoto, author of several mangas and animated movies, including Harlock. The Galaxy Express 999 is a space train on which the heroes of the manga, Maetel and Tetsuro, travel.
The only differences from the conventional model are the casebacks with a portrait of Maetel, inscriptions concerning the manga and the limited-series number. 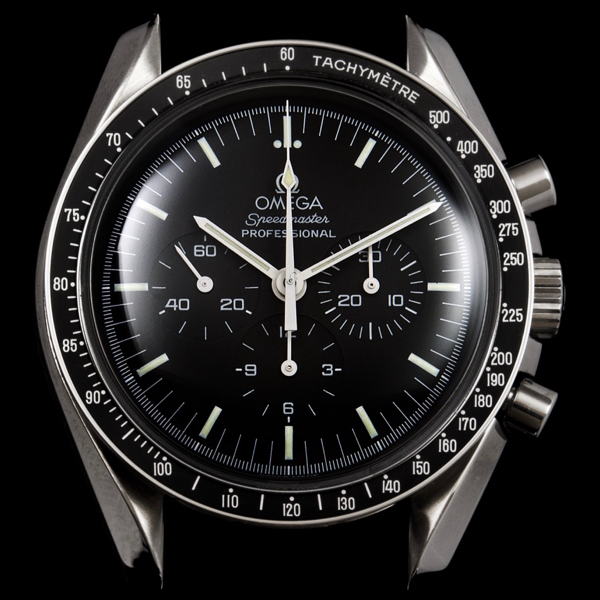 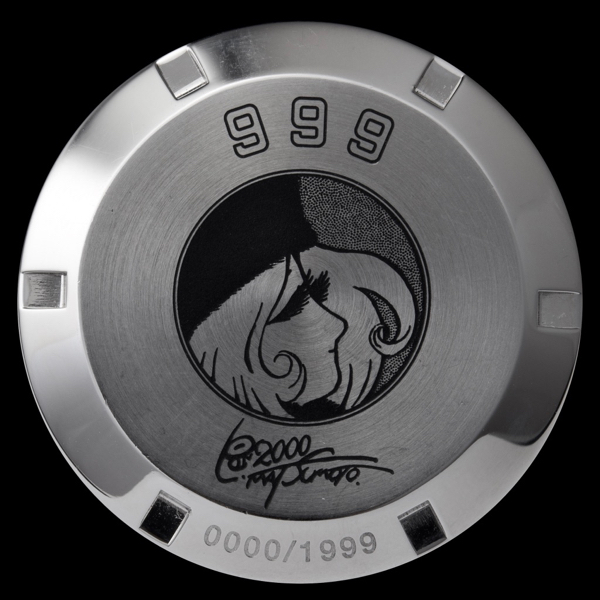 In 2003, the Mitsukoshi chain of Japanese department stores was the exclusive vendor of a series of a 300 watches with their own type of dial.
It’s a conventional Moonwatch without any particular inscriptions or numbers, but with the dial in a silver-white color popular in Japan, and black subdials, a combination known as the Panda dial.
Dials of this type are currently on sale, especially via the internet, so it is not easy to distinguish a conventional Speedmaster fitted with such a dial from a real Mitsukoshi, especially as the latter’s only distinguishing features are its dial and silvered hands. 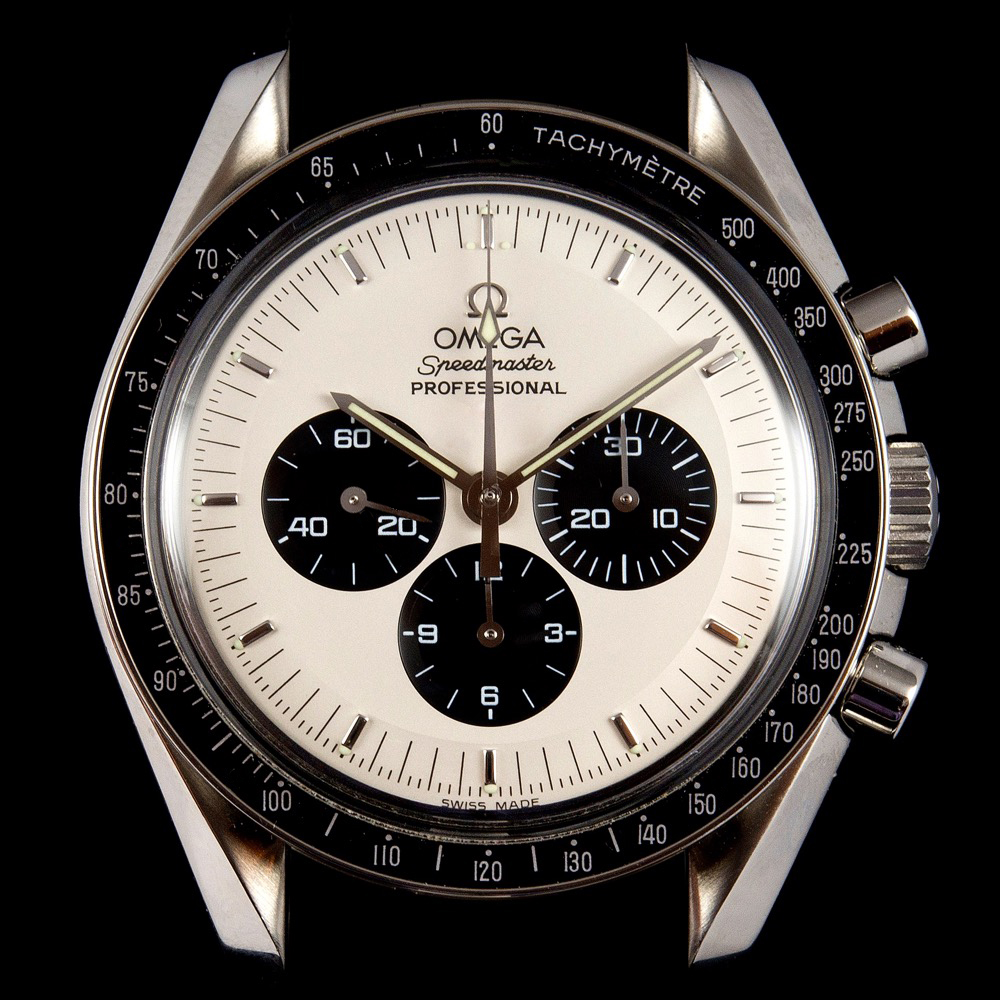 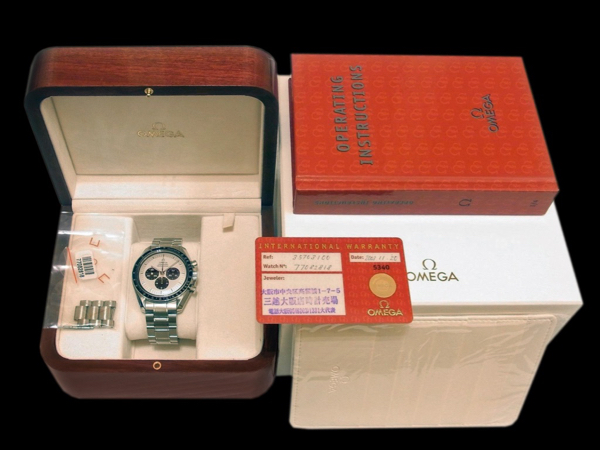 In 2004, a limited edition of 2’004 unnumbered watches was produced only for the Japanese market. Its distinguishing feature is the so-called Racing configuration of the dial and hands, recalling the very rare Speedmaster Moonwatch Racing models of the late 1960s and the more common Speedmaster Mark II Racing watch produced in the early 1970s (reference ST 145.014).
As with the Mitsukoshi model described above, dials and hands can still be acquired separately so it is not always easy to distinguish the real limited series from personalized versions. 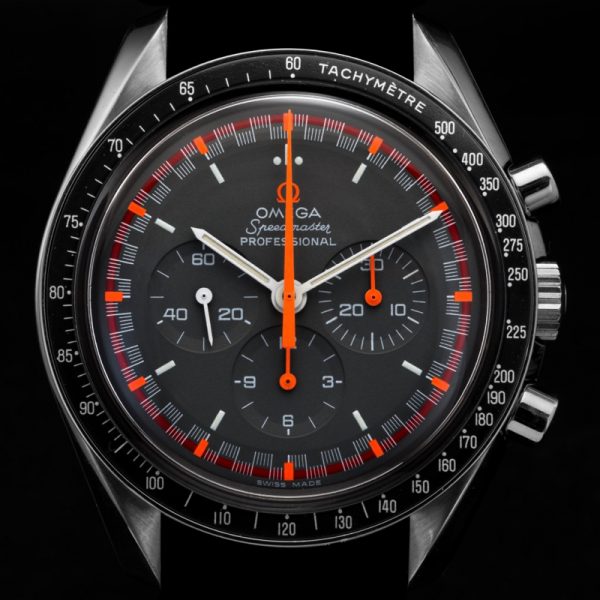 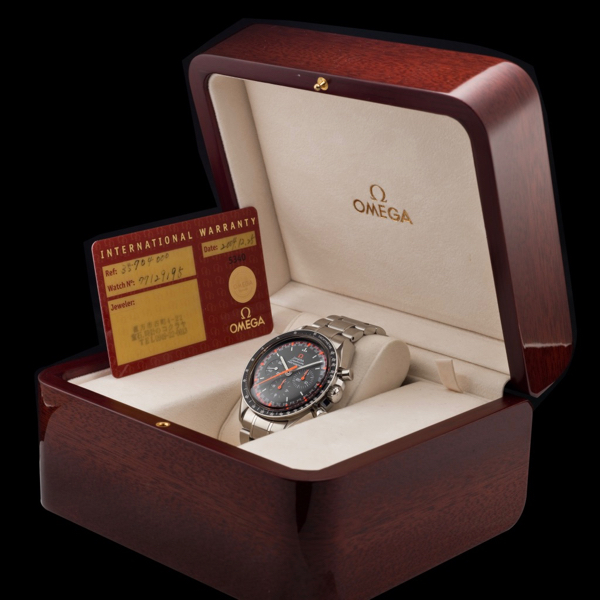 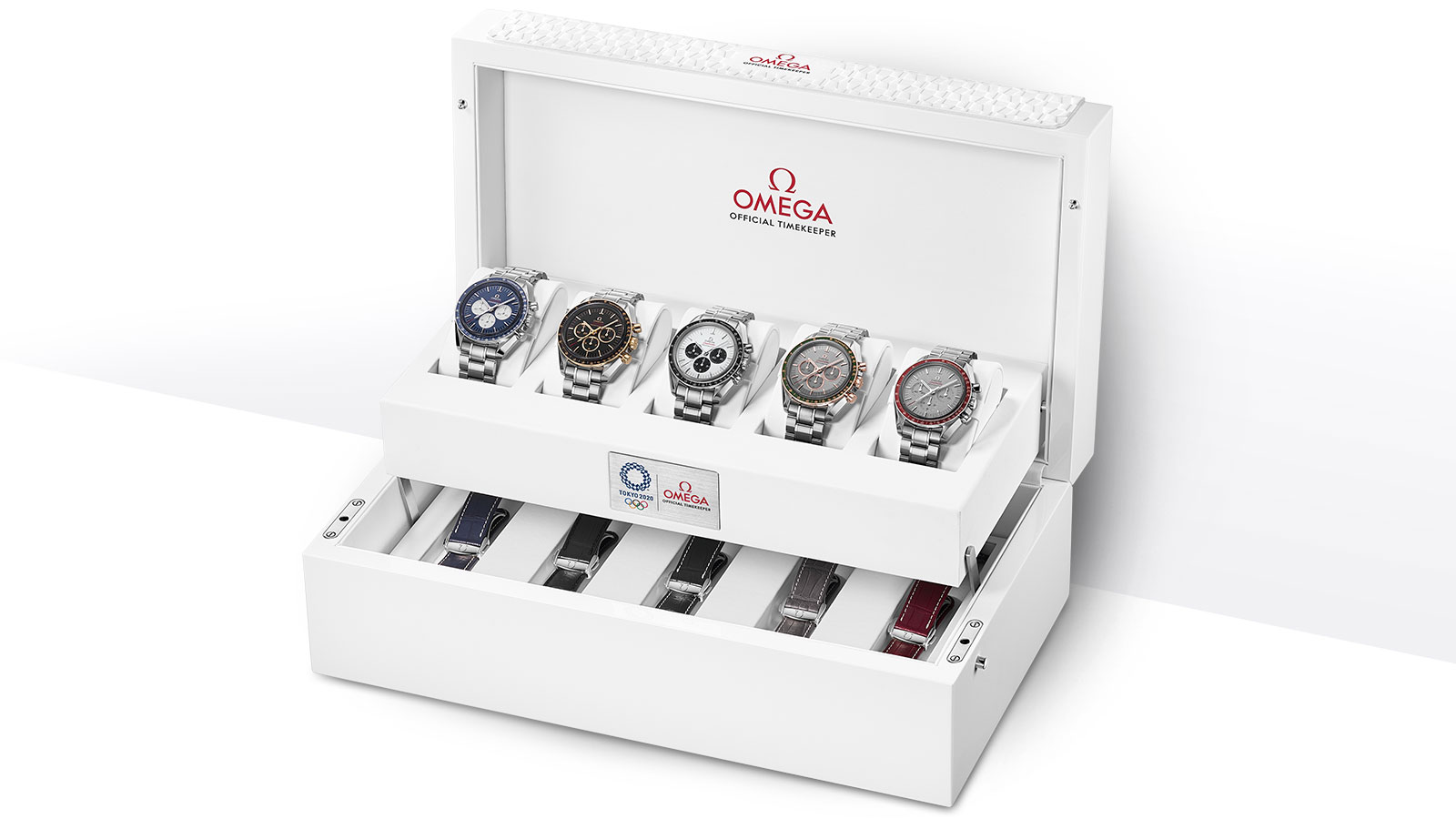 The new Omega Speedmaster Tokyo 2020 Olympics Collection comprises five watches, all based on the classic Speedmaster Professional Moonwatch (sapphire crystal version), but with a specific design inspired by the five colours of the Olympic flag – blue, yellow, black, green and red rings – depicting the five continents.

All five watches have Speedmaster printed in red on the dial.

One difference from the regular sapphire crystal versions of the Moonwatch concerns the caseback: the Olympic models feature a solid steel back stamped with the Tokyo 2020 logo.

Three versions are in full stainless steel, and two versions – the ones with green and black rings – have their bezel, pushers and crown in yellow or Sedna gold. 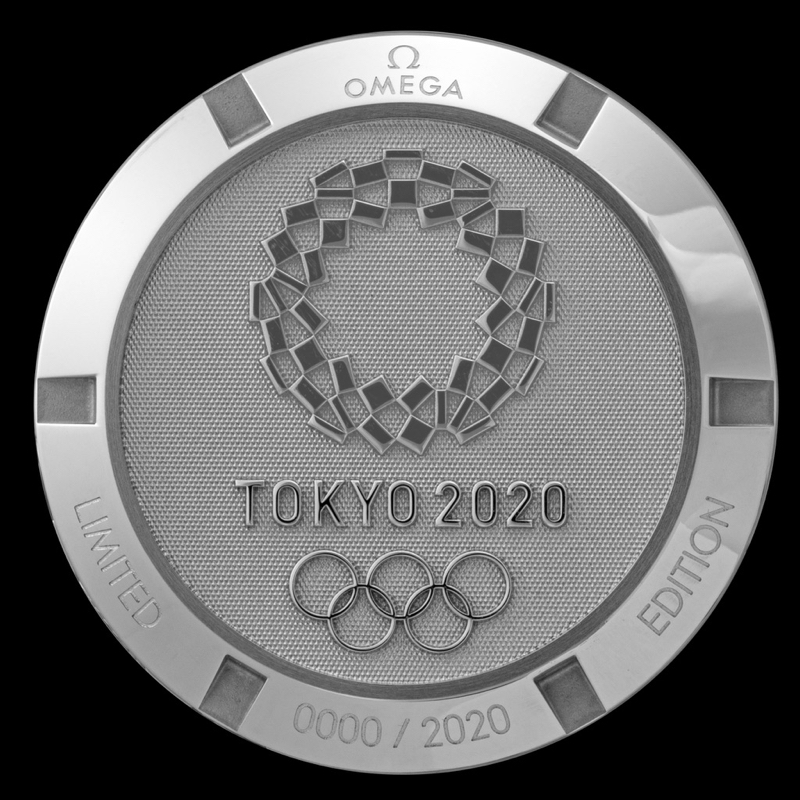 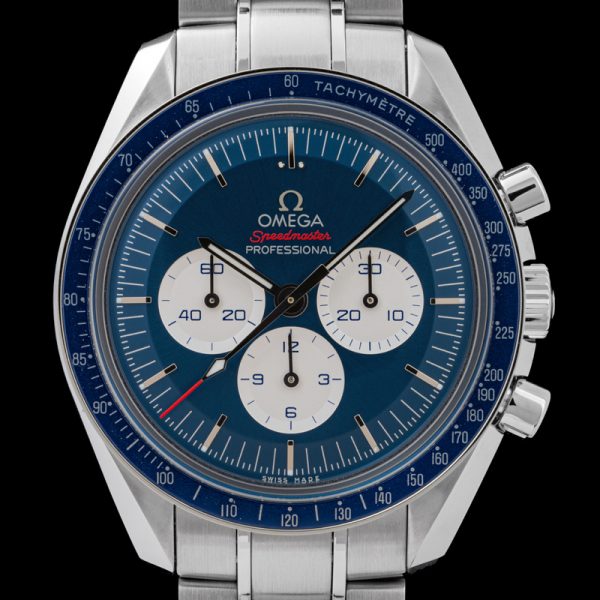 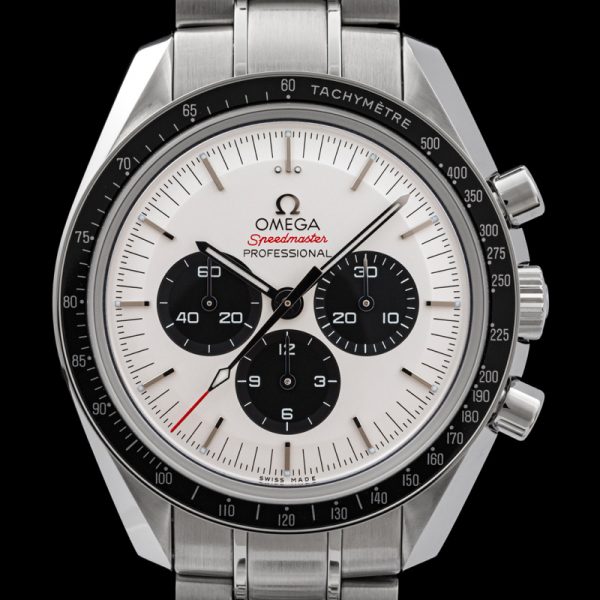 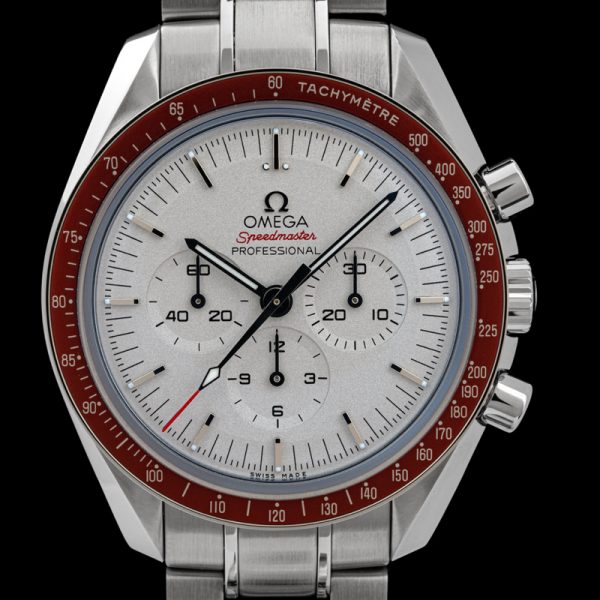 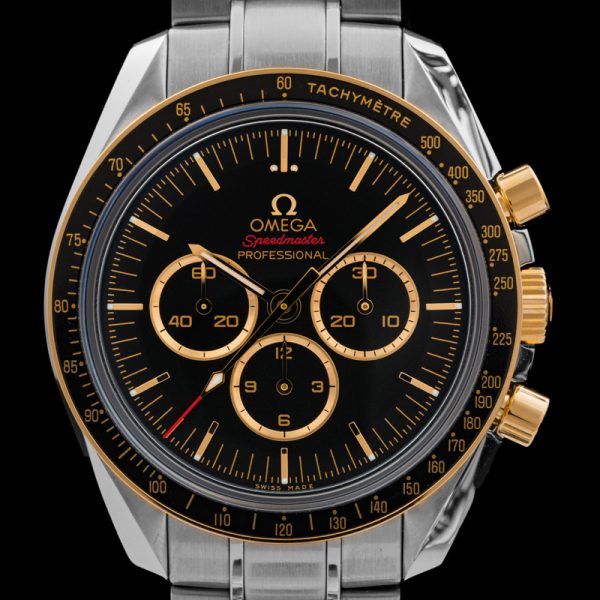 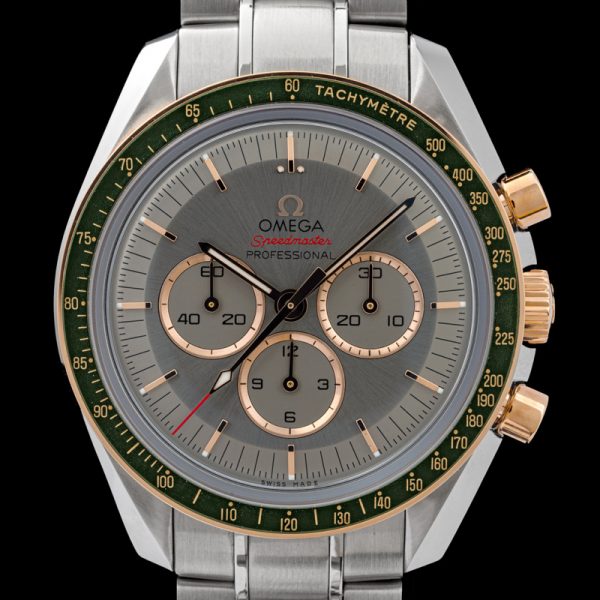 (1) The last 3 digits of the references are “001” for the individual watches, and “002” for the watches sold in the set.
(2) The set contains also five leather straps with deployant buckle clasps.