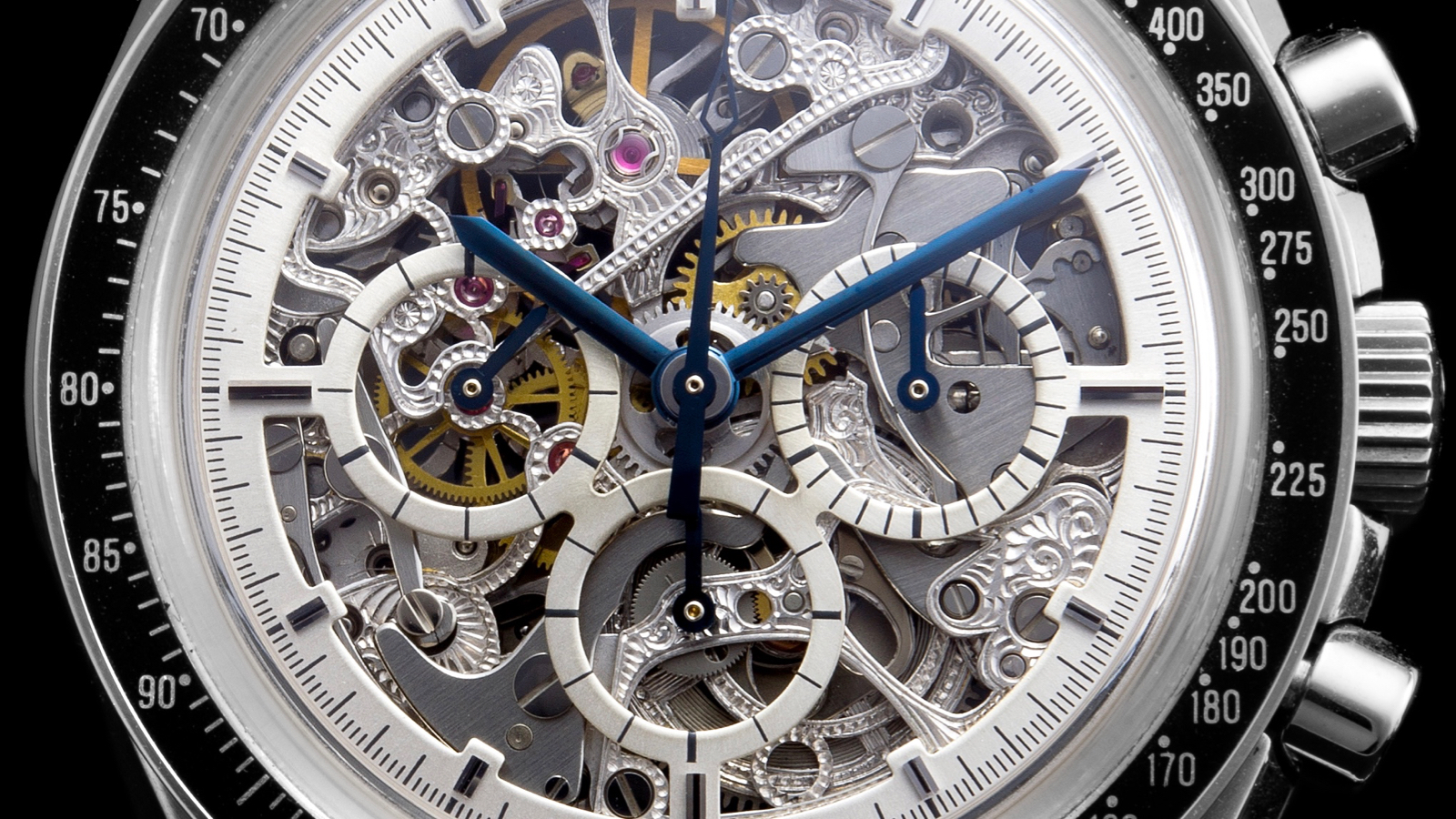 In 2018, Omega announced a new version of the Dark Side Of The Moon dedicated to the 50th Anniversary of Apollo 8. In 1968, the Apollo 8 crew was the very first humans to ever see the dark side of the Moon. That was a perfect opportunity to create a new model whose features remind this thematic: black ceramic, specially decorated blackened movement, which has been laser-ablated to produce realistic imagery of the lunar surface.

Creating a skeletonized model is not so obvious for a Speedmaster. The watch has always been considered as a sport chronograph, which seems to exclude any kind of “luxury” custom. Actually this is not the 1st time that Omega makes this choice for exclusive models. The Speedmaster DSOTM Apollo 8 is the 7th skeletonized series in the brand history.

And for us, this is the opportunity to review all these 7 very special Speedmasters series.

For all the skeleton Speedmaster models produced until 2003, the openwork was done entirely by the expert hands of Armin Strom.

Armin Strom started his career as an independent watchmaker. He studied watchmaking and set up his own store in his native town of Burgdorf in 1967. He gradually developed a particular talent for the art of hand skeletonizing. He won a Guiness World Record in 1990 after he created the world’s smallest hand-skeletonized watch for ladies. He grew to become a true legend in this type of work. The first watches bearing the Armin Strom name were presented in 1984 at what was the still called the Basel Watch Fair. He also caught the attention of Switzerland’s bigger watch brands, like Omega, who entrusted him the realization of many skeleton models. 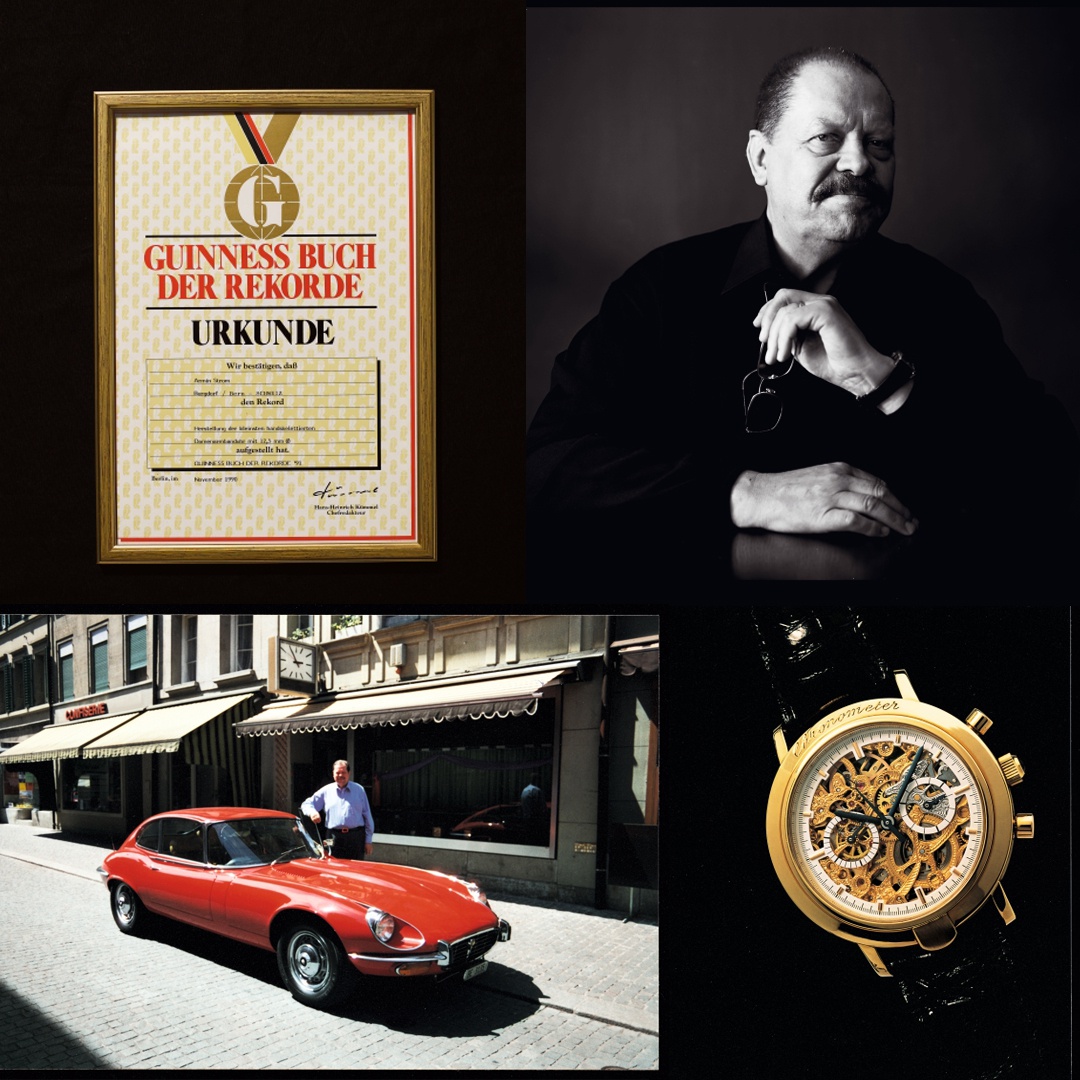 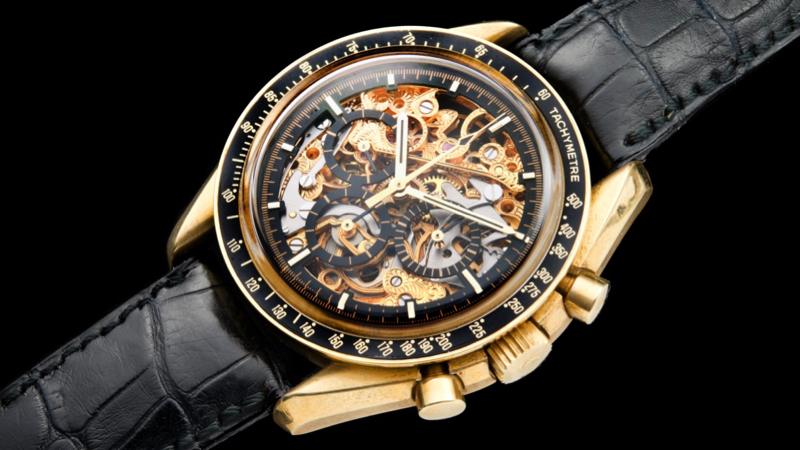 The caliber 27 CHRO C12 is the ancestor of the caliber 321 that was fitted to all Speedmasters until 1968. To mark its 50th anniversary, OMEGA came out with three limited series, all of which had cases in 18K yellow gold:
– the first series, of which 999 were made, was fitted with a caliber 863 movement and a full caseback,
– the second series of 250 watches had a COSC-certified caliber 864 movement with a display back,
– the third series of 50 watches had a skeletonized movement and an openwork dial.
These three series comprised the first Speedmasters with sapphire-crystal glasses. 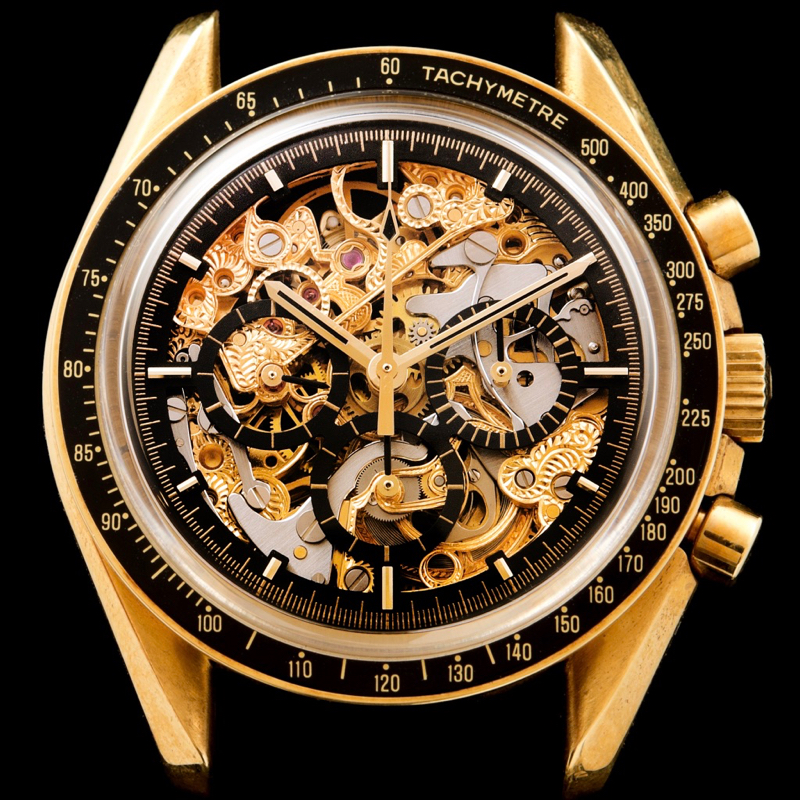 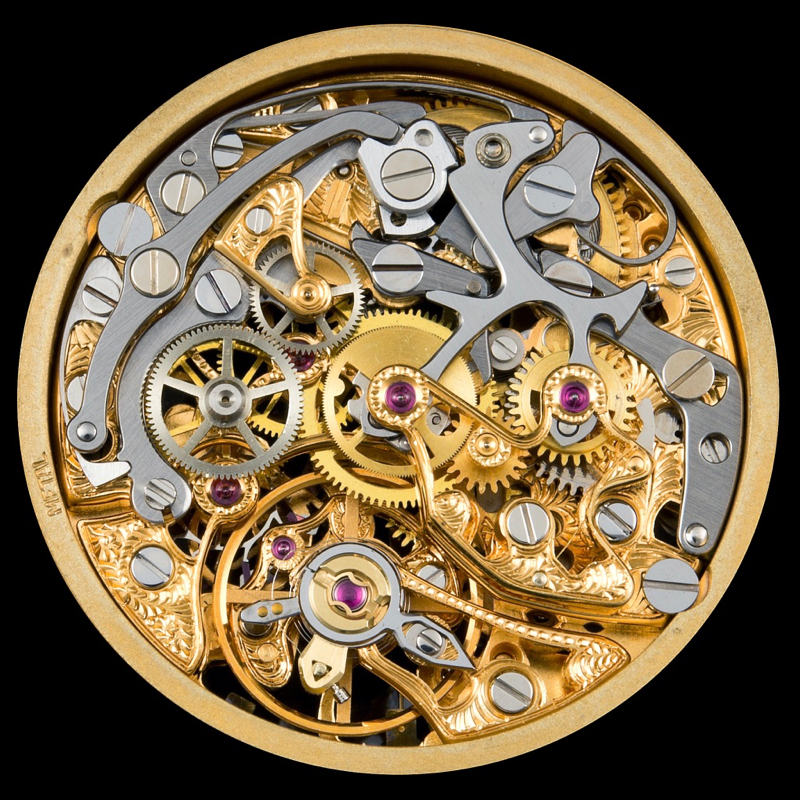 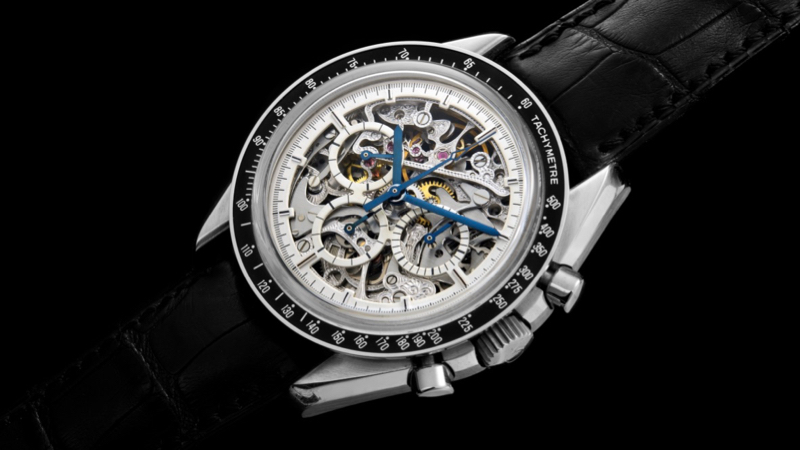 Two exceptional series in platinum with skeleton dials and movements (caliber 867) were added to the Apollo XI 25th Anniversary – White Gold series (BC 348.0062).
The first series of 50 numbered watches was proposed with either leather straps or platinum bracelets. 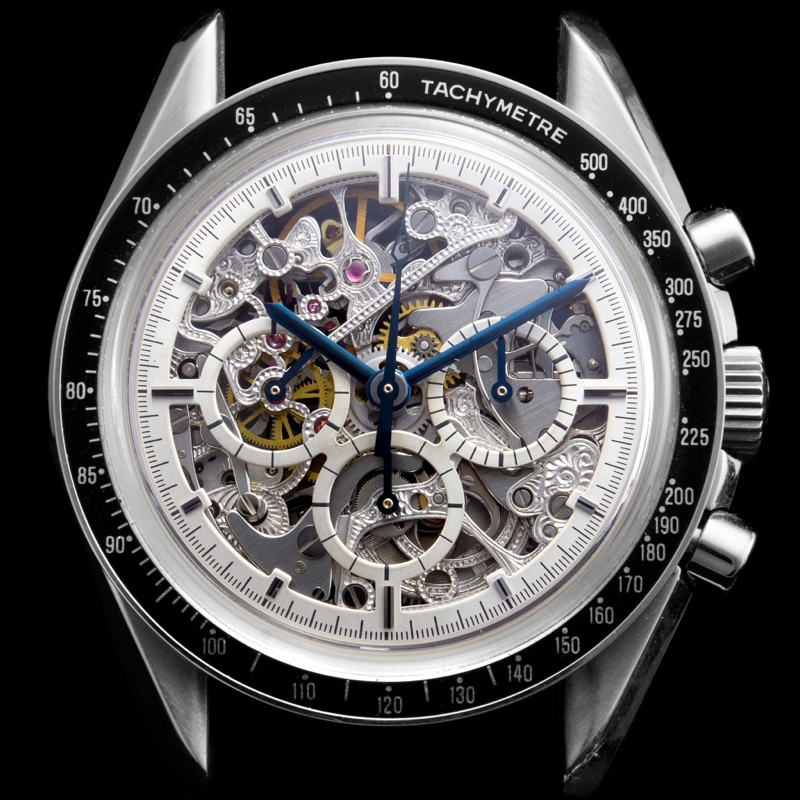 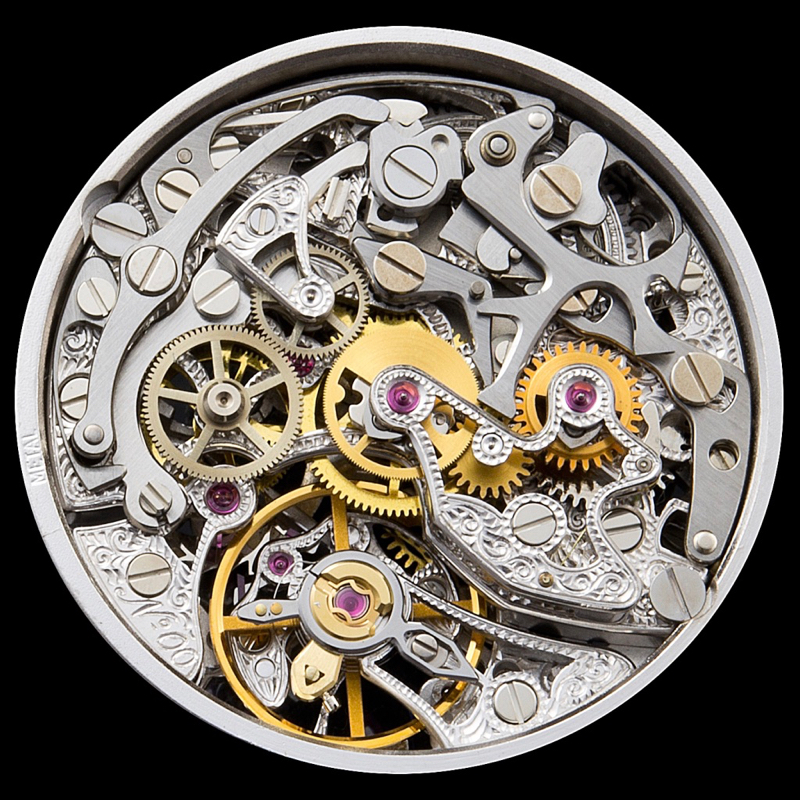 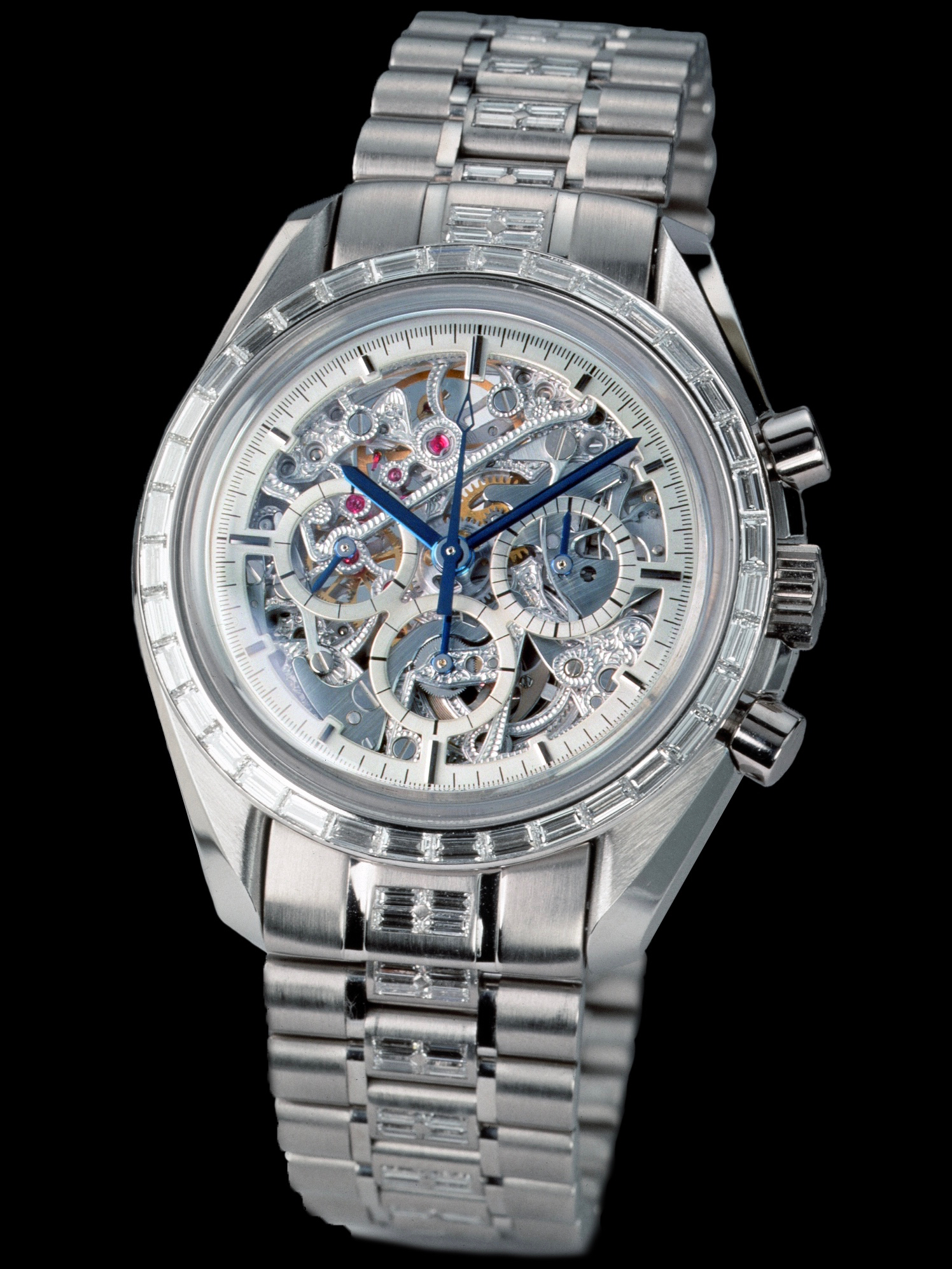 This is the last edition of the Apollo XI 25th Anniversary commemorative models produced in 1994.
Numbered series of 10 watches (5 on on leather straps and 5 others with platinum bracelets set with 80 baguette diamonds). 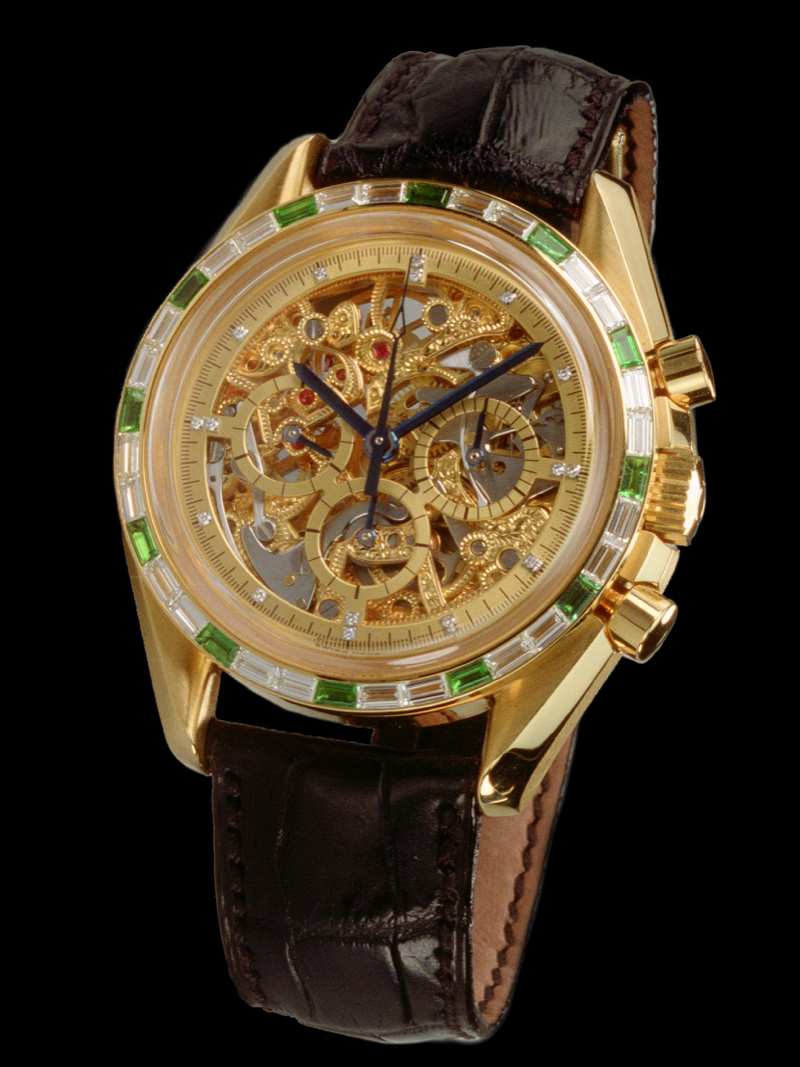 Unique piece in yellow gold with a skeleton movement and precious stones made to the order of a Saudi Arabian client.
The openwork dial in yellow gold is set with diamonds at each hour and an extra diamond for the quarters. The bezel is set with pairs of diamonds alternating with baguette emeralds, totaling 36 gemstones. 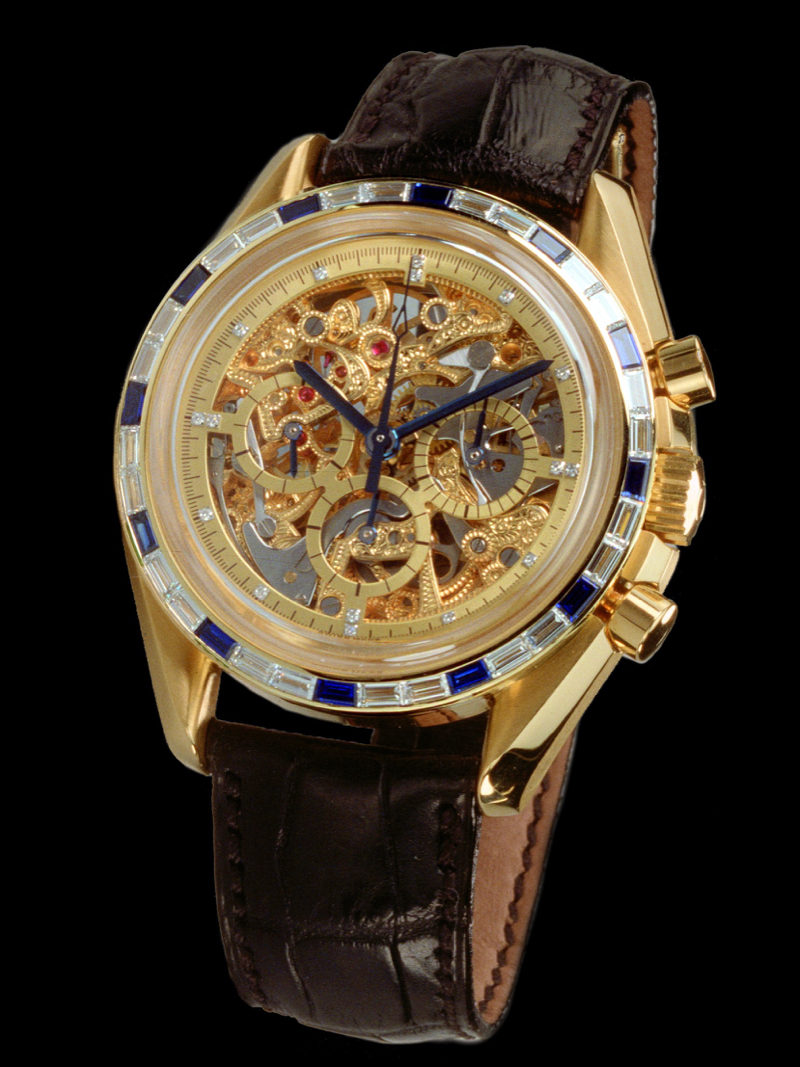 One-off piece in yellow gold with a skeleton movement and precious stones, ordered especially by a customer from Kuwait.
The skeleton dial in yellow gold has a diamond marking each hour with an extra diamond at the quarters. The bezel is set with 36 gemstones, pairs of diamonds alternating with baguette sapphires. 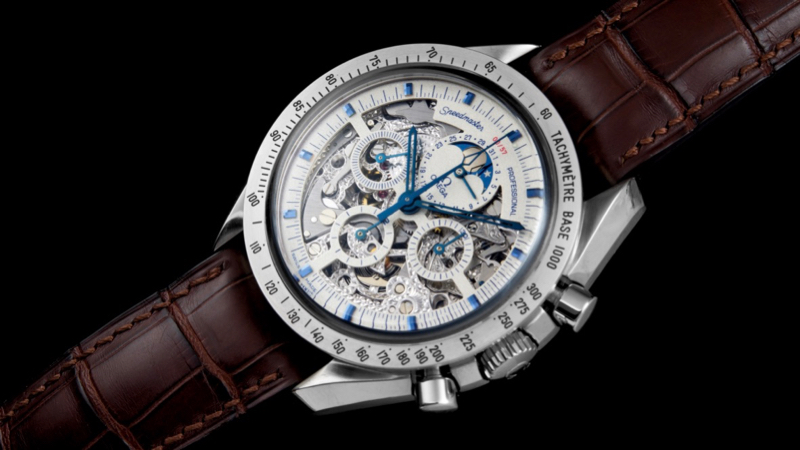 In 2003, OMEGA made a limited series of 57 skeleton Speedmasters in platinum with moonphases. The number made refers to 1957, the year the Speedmaster was created. As with the brand’s other skeleton models, the openwork was done entirely by the expert hands of Armin Strom. The modified caliber 1866 movement has the reference 3604A. 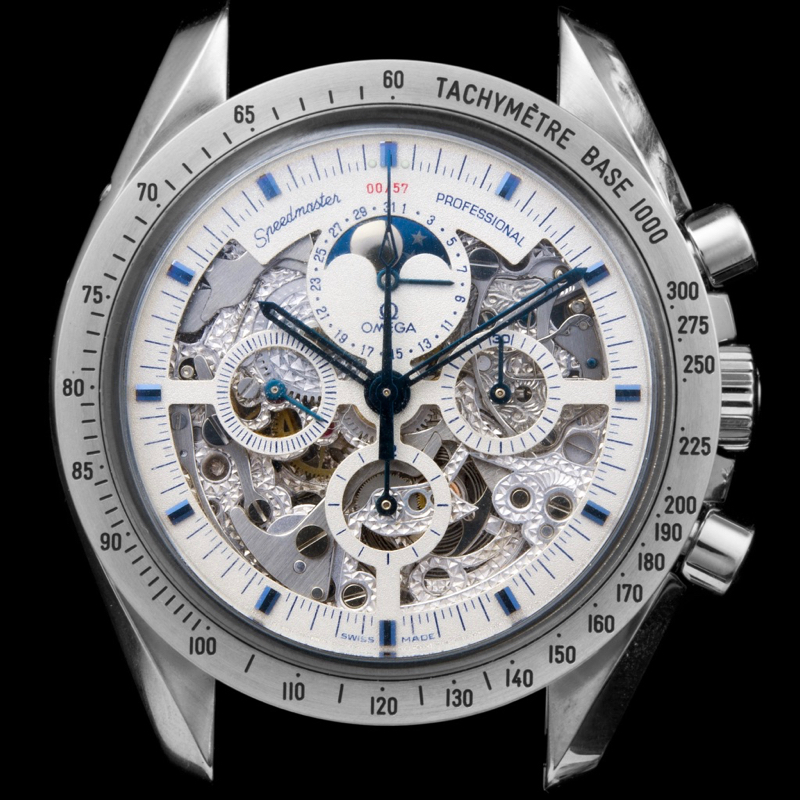 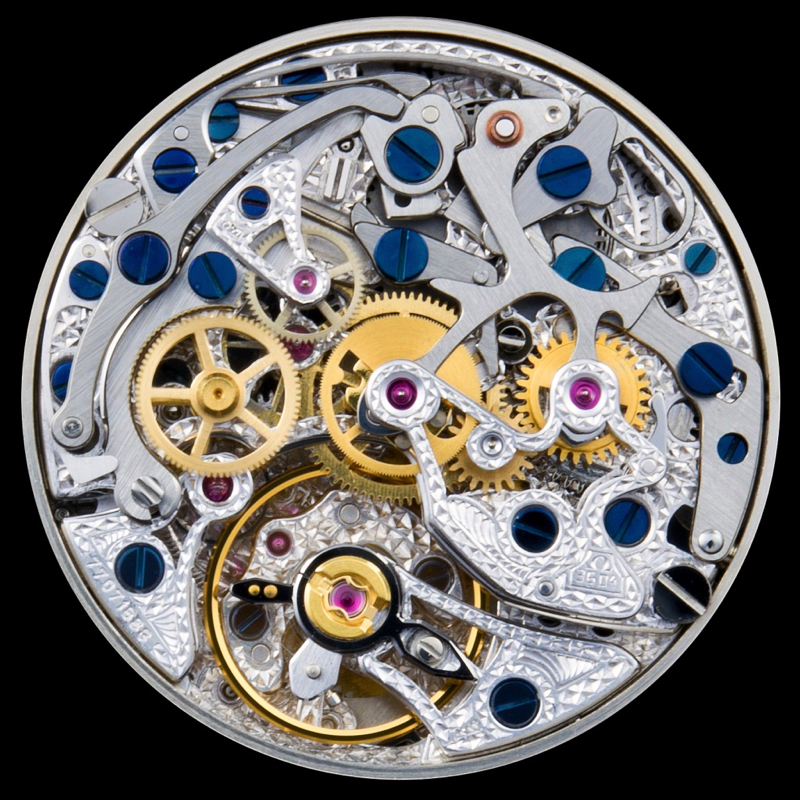 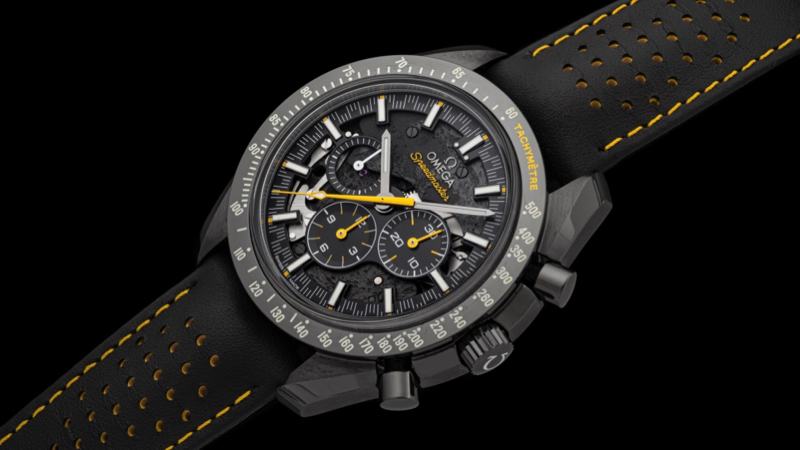 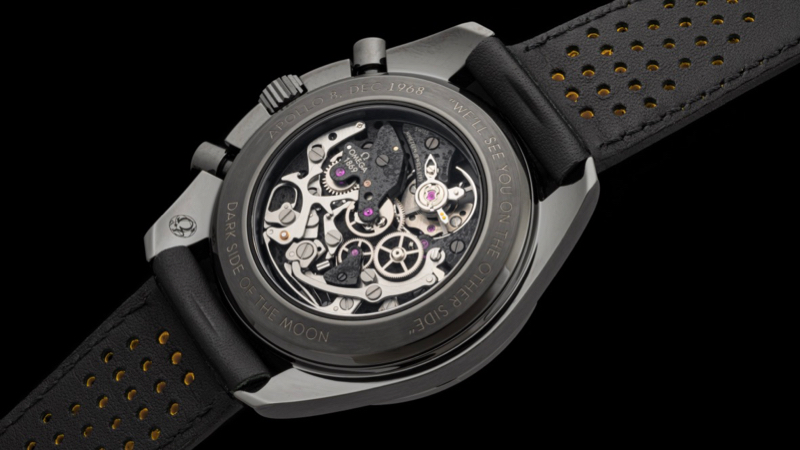 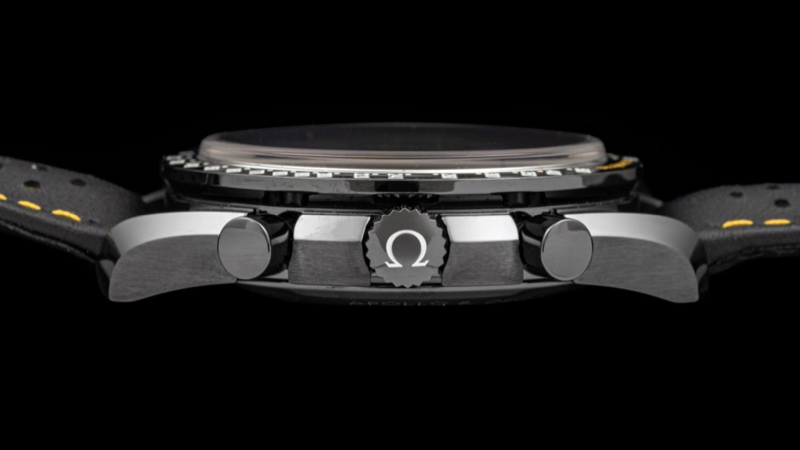 DARK SIDE OF THE MOON – APOLLO 8

Presented on a perforated black leather strap with yellow rubber through the middle, this Speedmaster’s unique design remains true to Apollo 8’s pioneering spirit. The entire watch is produced in sleek black ceramic and the dial has been expertly skeletonized to reveal a blackened movement inside. The movement has been laser-ablated to produce realistic imagery of the lunar surface.
The chronograph hands are varnished yellow, while the watch’s tachymeter scale and crown are filled with white Super-LumiNova. The Speedmaster and Tachymetre words also appear in yellow.
Around the transparent caseback, the words “WE’LL SEE YOU ON THE OTHER SIDE” reference Jim Lovell’s final words spoken to ground control just before Apollo 8 travelled to the far side of the moon.
The dial-side of the watch is a light shade with a landscape full of craters to represent our view of the moon’s surface from Earth. 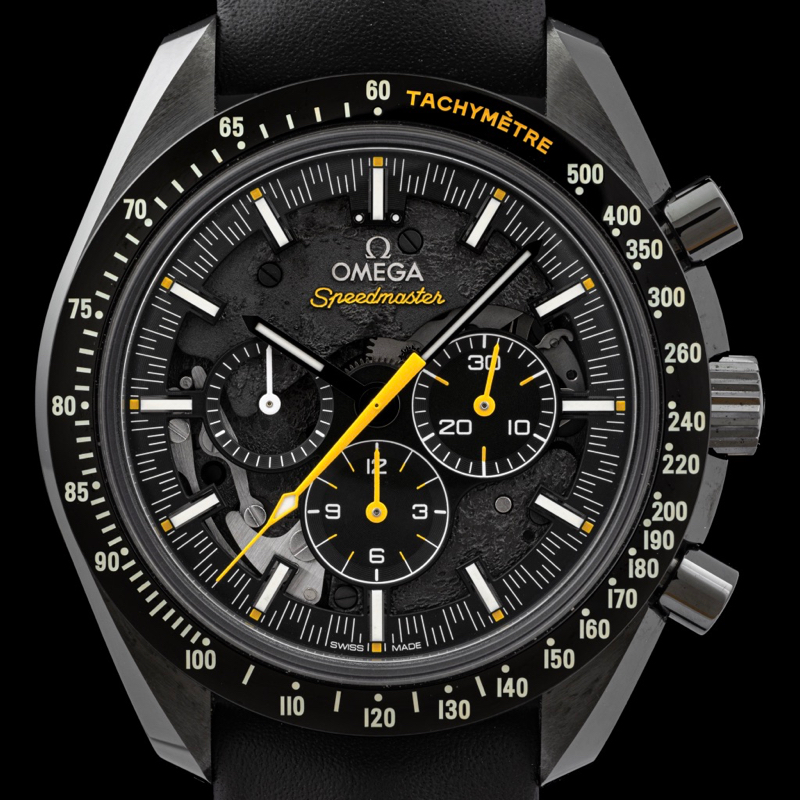 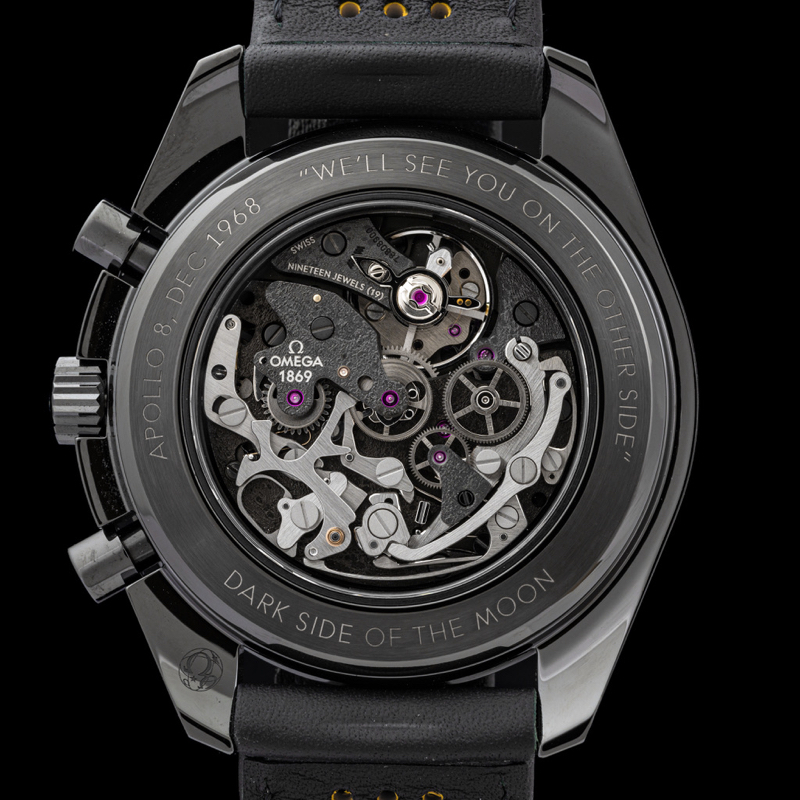