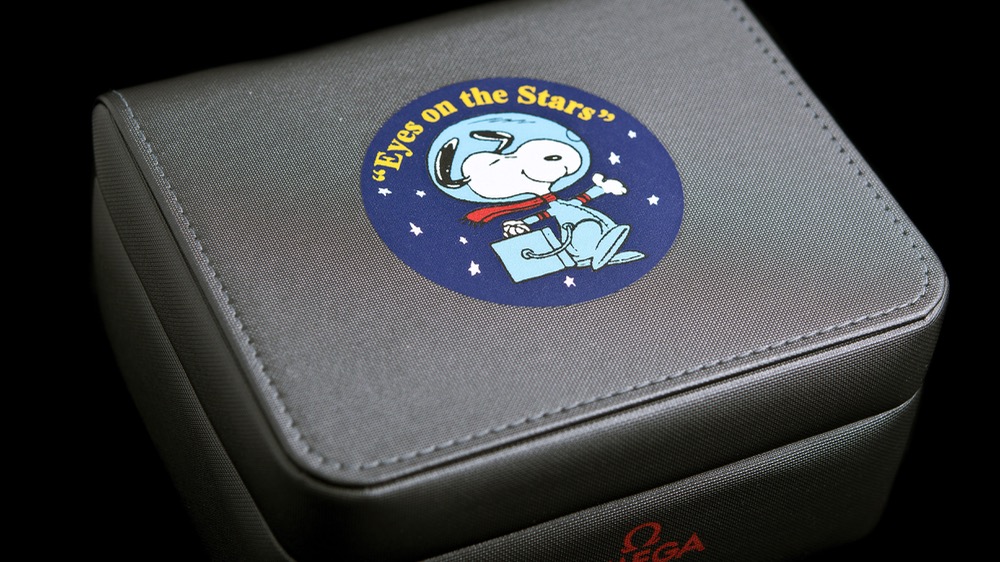 The Snoopy Limited Series are among the most sought-after Speedmaster models. Here is the story of a huge success based on an historic milestone of the space conquest. 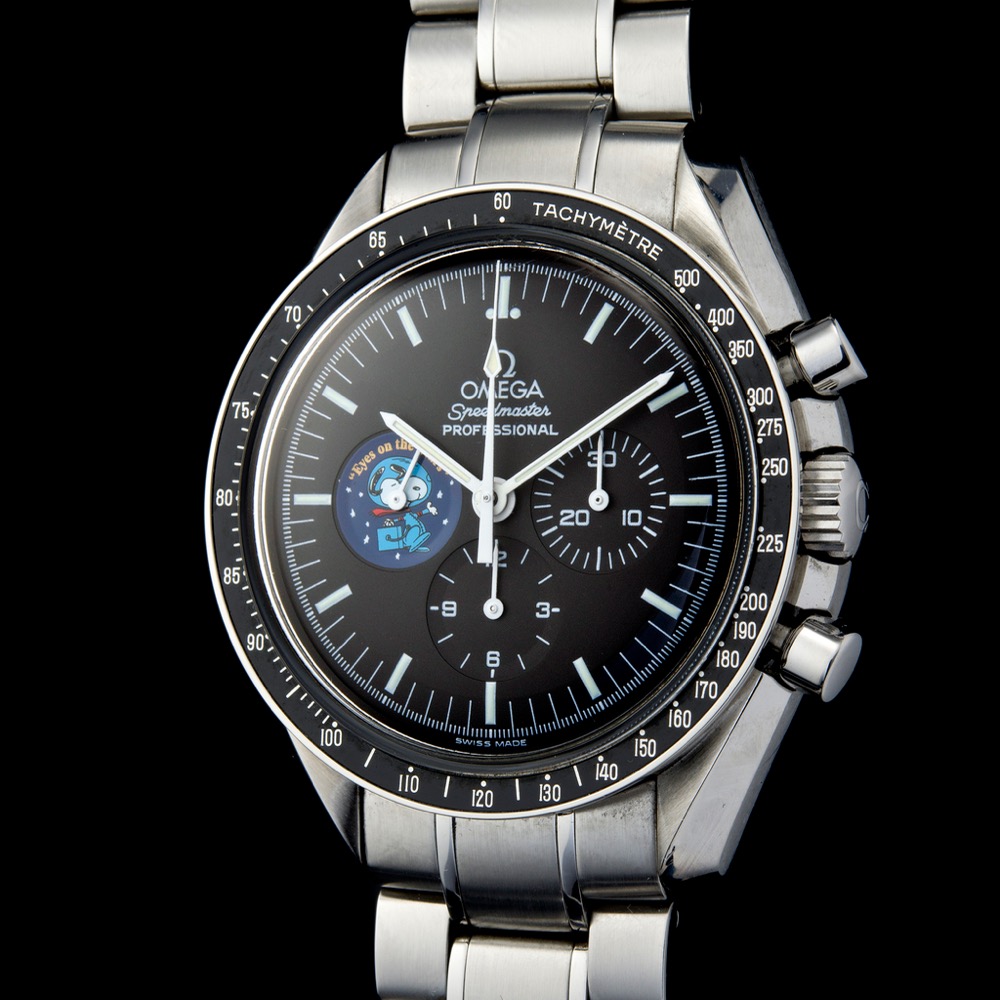 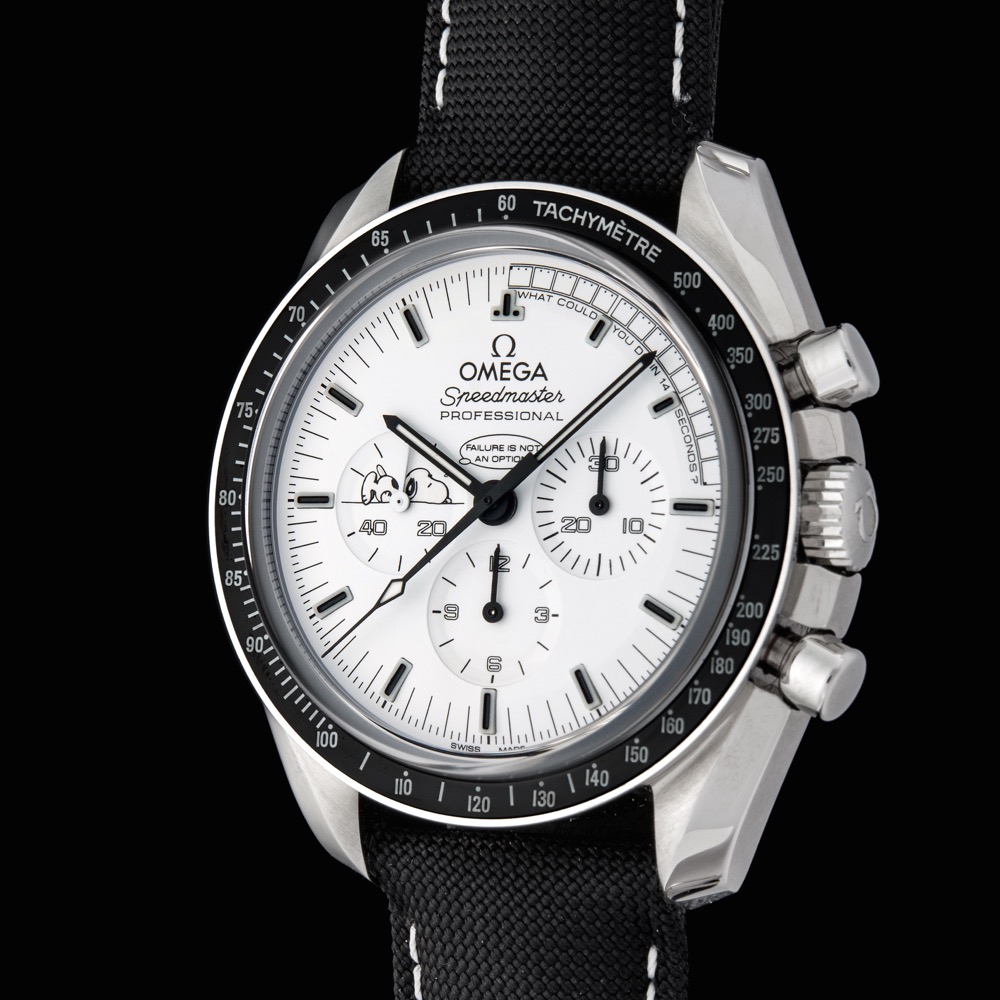 On October 5, 1970, astronaut Thomas Stafford personally handed the Snoopy Award to Hans Widmer, OMEGA’s technical manager. NASA astronauts award this prize to companies that make an exceptional contribution to the success of space flights. The Snoopy Award is a kind of diploma featuring the Snoopy character, NASA’s mascot, dressed as an astronaut and the slogan, Eyes on the Stars.

In this case it was awarded to OMEGA for its contribution to the “successful failure” of the Apollo 13 mission. When most of the on-board instruments had been shut down to conserve energy, some of the maneuvers had to be timed by the Speedmaster’s chronograph, notably the burn time of the rocket motors to set the spacecraft’s re-entry trajectory. 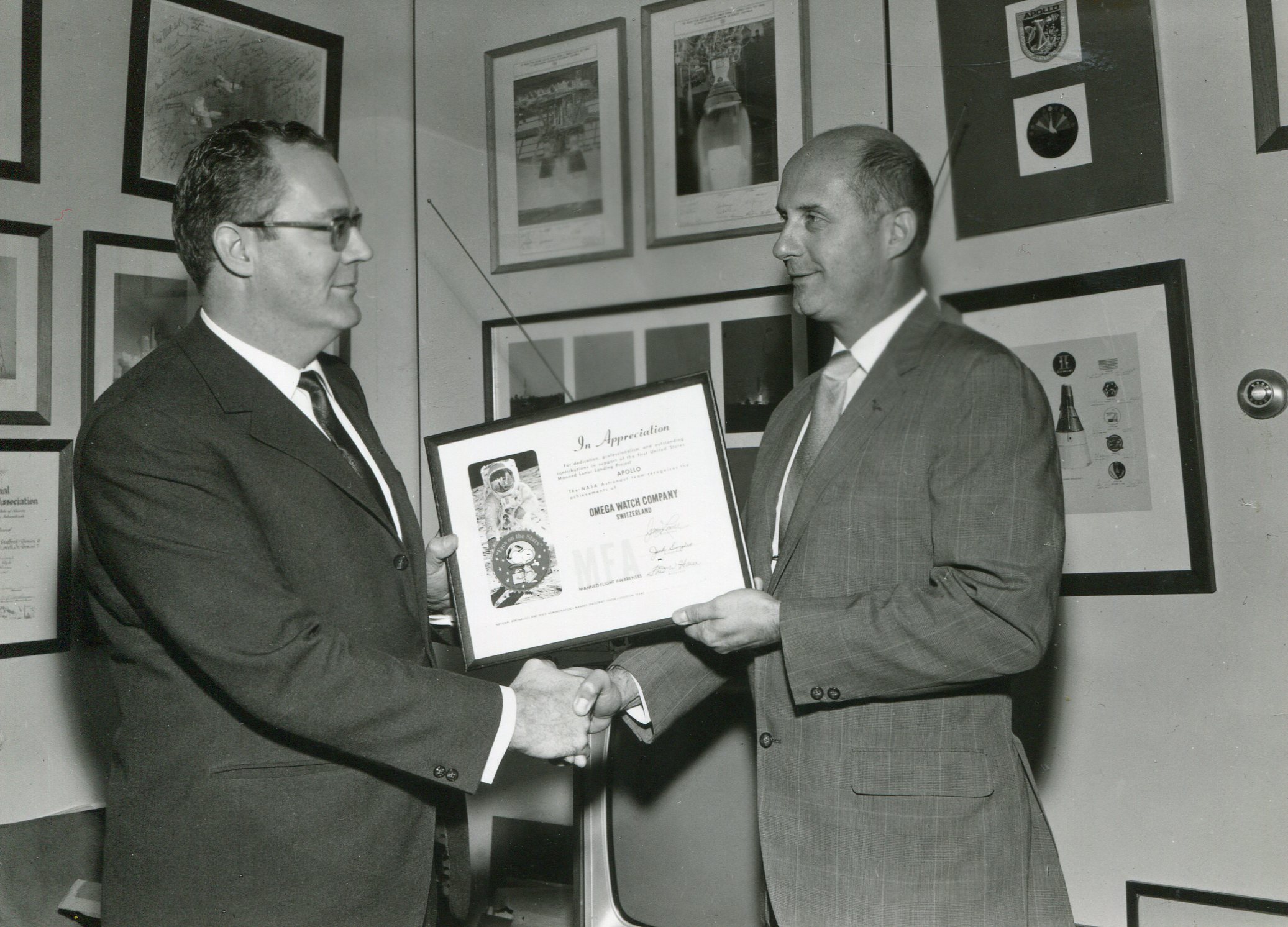 Apollo 13 was the seventh manned mission in the Apollo space program and the third intended to land on the Moon. The craft was launched on April 11, 1970, at 13:13 CST from the Kennedy Space Center, Florida, but the lunar landing was aborted after an oxygen tank exploded two days later, crippling the Service Module (SM) upon which the Command Module (CM) had depended. Despite great hardship caused by limited power, loss of cabin heat, shortage of potable water, and the critical need to make makeshift repairs to the carbon dioxide removal system, the crew returned safely to Earth on April 17, 1970, six days after launch.

Houston, we’ve had a problem

That is the message the astronauts (Jim Lovell, Commander, Jack Swigert, Command Modul Pilot, and Fred Haise, Lunar Modul Pilot) reported after they heard a “loud bang”, approaching 56 hours into the mission. The detailed story of the accident, and the return journey can be read here on Wikipedia.  The Apollo 13 crisis has been described in many books, TV programs and films. Jim Lovell published a book, Lost Moon: The Perilous Voyage of Apollo 13, in 1994. In 1995, a film adaptation of the book, Apollo 13, was released, directed by Ron Howard and starring Tom Hanks as Lovell. 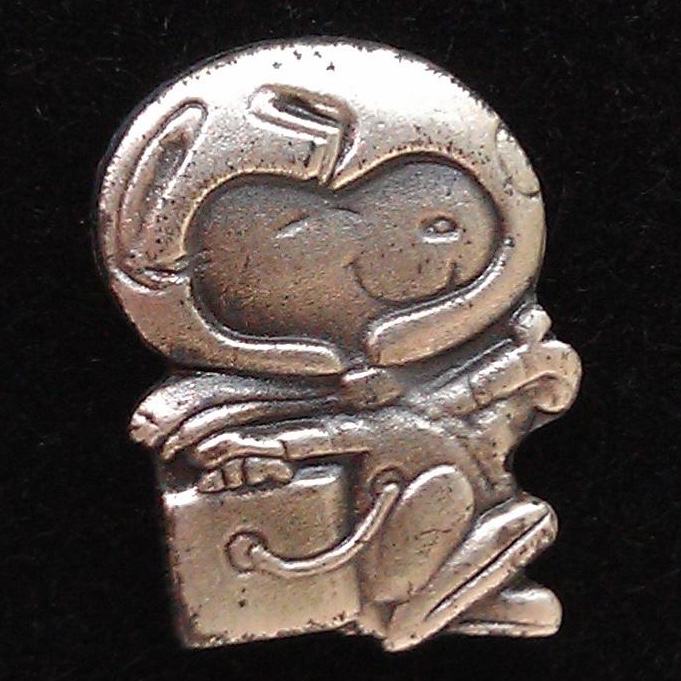 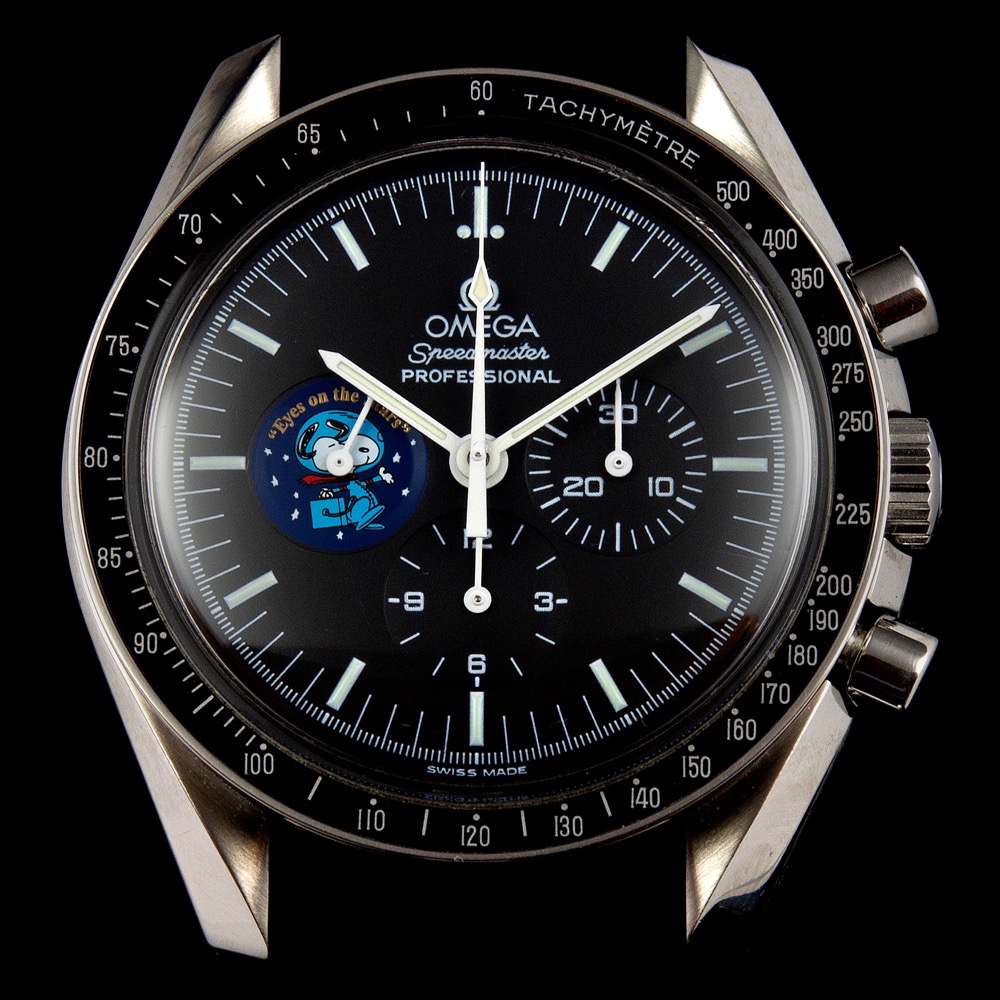 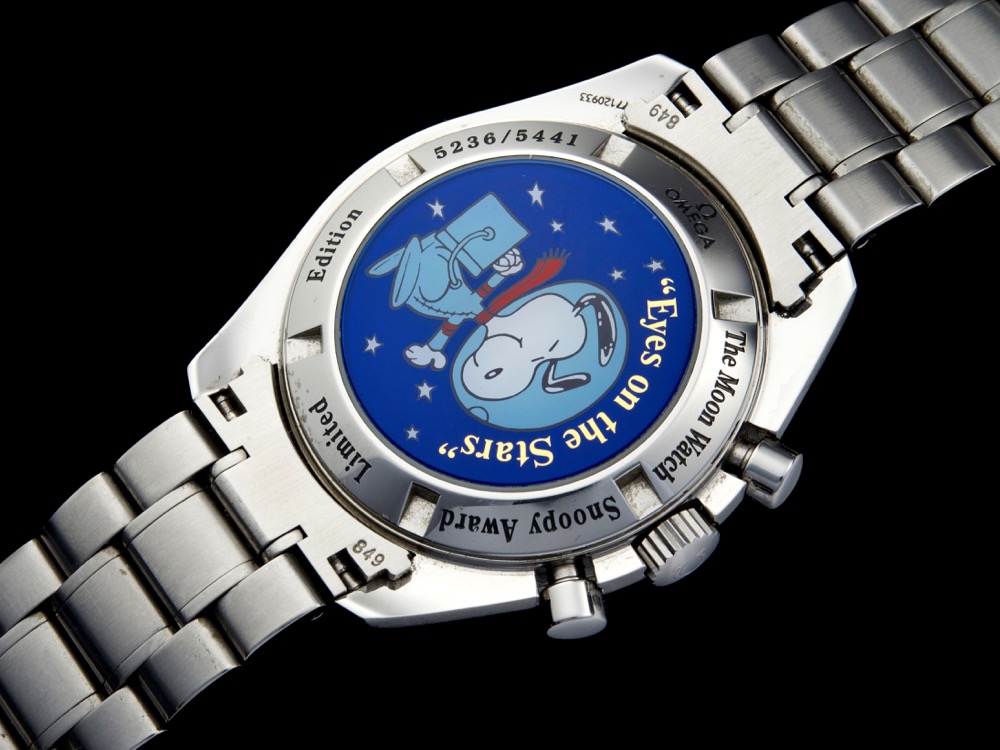 Model-specific
black luminova dial
with a Snoopy badge
painted on the subdial
at 9 o’clock.

Stainless steel with a black aluminium insert and a tachymeter scale.

Display back with a specific sticker
of the Snoopy logo
on the sapphire crystal.
Caseback bezel engraved and painted black:
Ω OMEGA – The Moon Watch – Snoopy Award –
Limited – Edition – xxxx/5441.

Model-specific anthracite-gray box with the Snoopy badge and Eyes on the Stars and Ω OMEGA inscribed in red. 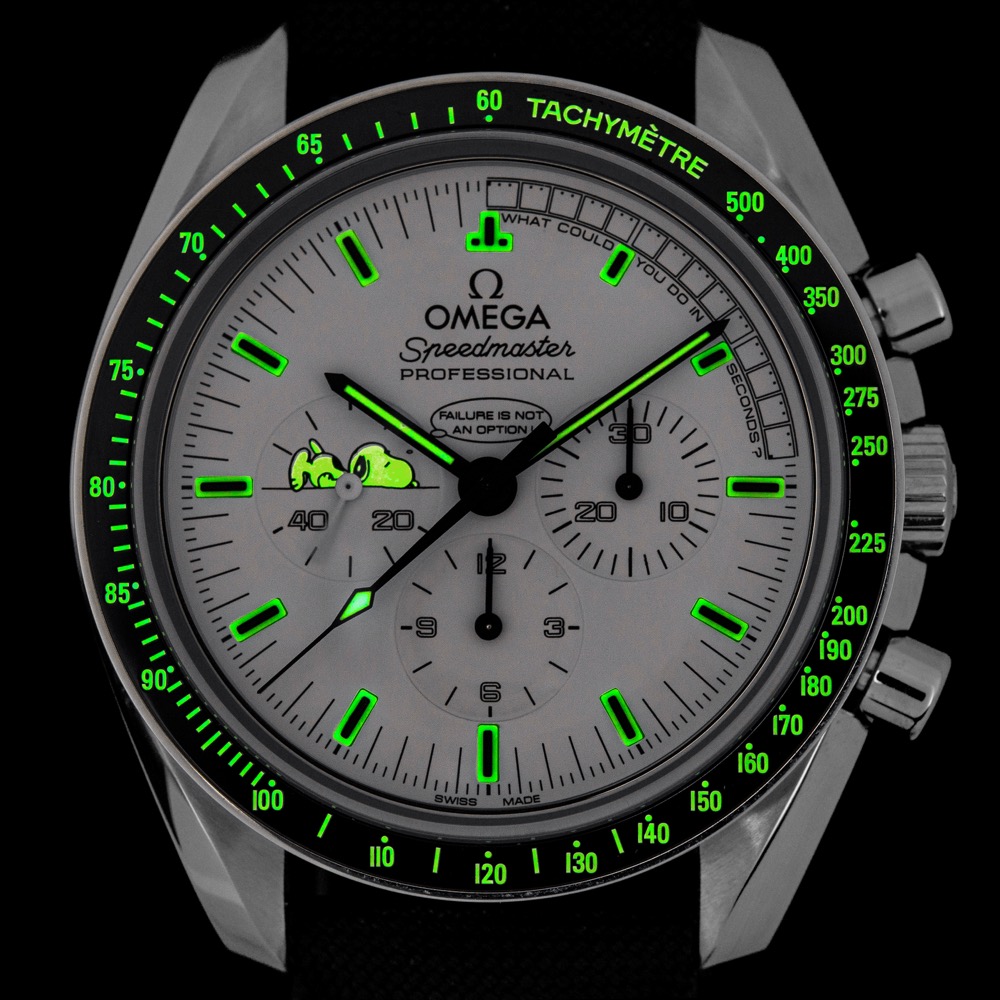 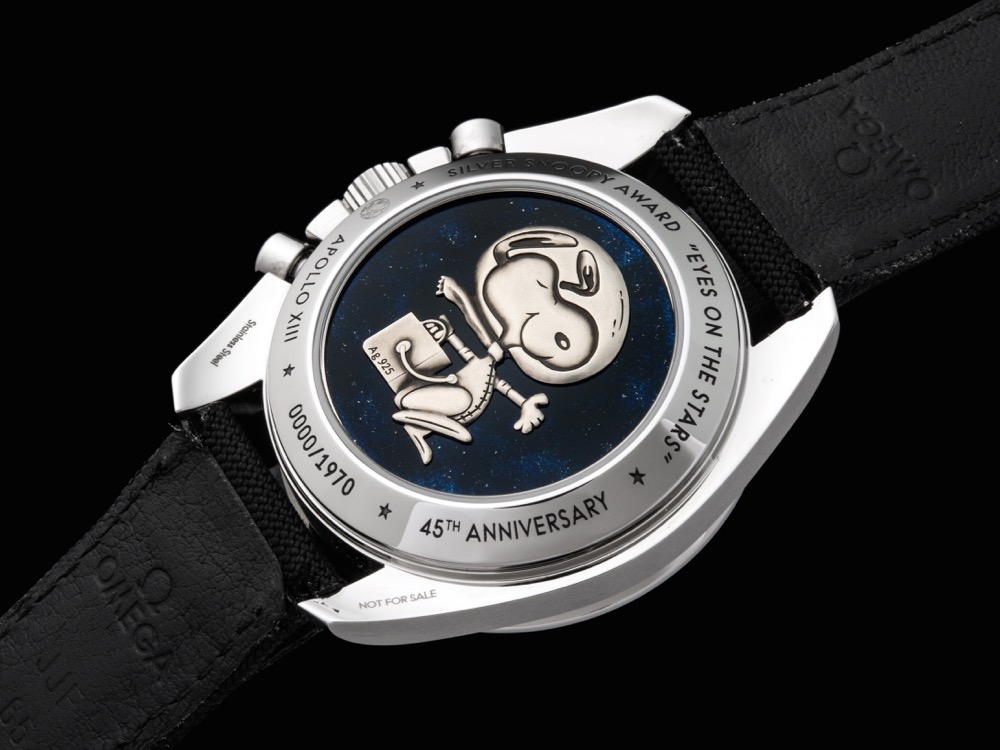 Model-specific white dial with black indexes, Snoopy depicted in the running seconds subdial and coated with luminova, “What could you do in 14 seconds” with 14 frames between 0 and 14 seconds, and “Failure is not an option” in the center.

Stainless steel with a black ceramic ring and a luminova tachymeter scale.

Model-specific caseback with a 925 silver medallion mounted on a plate of the same material, surrounded by alluring dark blue enamel with a silver powder sprinkled on each individual caseback by hand. On the bevel:
SILVER SNOOPY AWARD – ”EYES ON THE STARS”
– APOLLO XIII – xxxx/1970 – 45TH ANNIVERSARY.

DID YOU KNOW THAT…

– One particular detail is worth noting for the 2003 Series. The badges on the dial and the caseback are different, presumably because they came from different suppliers. The four lines showing a reflection on the helmet are missing on the sticker image.

– Snoopy’s connection with NASA actually began before Apollo 10. In 1968, NASA chose the beagle as an icon who would “emphasize mission success and act as a ‘watchdog’ for flight safety.” Read more about NASA & Snoopy here.

– “What could you do in 14 seconds?” refers to the time taken to correct the trajectory measured by the Apollo 13 astronauts with their Speedmasters.

– The association of the quote “Failure is not an option” with the Apollo 13 mission comes about due to its appearance in the film Apollo 13, but actually this phrase has never been pronounced during the mission. It is is also the title of an autobiographical book written by the NASA Flight Director Gene Kranz.