The first Flightmaster chronograph model, the ST 145.013 powered by the caliber 910, appears in OMEGA’s internal documentation starting September 1, 1969, with the first detailed commercial and marketing materials appearing around October 1969.

Nonetheless, the truly remarkable aspect of this process is that the preparations for the launch of the model were organized very early on, since the very first detailed technical descriptions of the case and all corresponding details such as spare parts date from March 19, 1969. 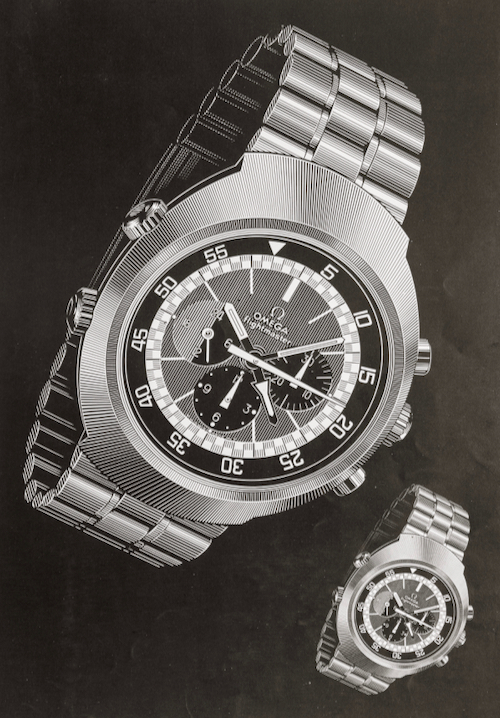 The dials for the Flightmaster watches were all made by Jean Singer & Co. SA in La Chaux-de-Fonds.

The texts, printed in white, are:

• the model name flightmaster (always in lower case throughout);

• T SWISS MADE T is printed at the bottom of the dial.

These dials are particularly sensitive to aging, especially those of the first generation, and are thus liable to develop different patinas, giving each watch a unique look. The main area of the dial can become lighter, changing to a pale gray or beige, while the white ring of the minutes scale might darken into beige or gray. The subdials can oxidize and take on a chocolate hue.

The dials can be classified into two main categories, recognizable by the subdial at 9 o’clock:

• category A dials, specific to the caliber 910, have a black/green bicolor subdial at 9 o’clock representing night and day with a 24-hour hand. The pale minutes track is demarcated by a small step;

• category B dials are fitted on the caliber 911 movement for extremely rare ST 145.013 transitional models, and mainly for reference ST 145.026 and ST 145.036. The 24-hour indication was replaced by running seconds, which meant that the dial had to be recalibrated from 0 to 60 and have a single color (black).

The pre-production dials (all category A) are virtually unknown and very rare.

They were likely to have been made as a pre-production trial and they share a typographical style that was not retained for the production dials.

One particularly noticeable feature is the lengthened numeral 4 of the 24-hour subdial. The numerals 6, 8 and 9 are also different. 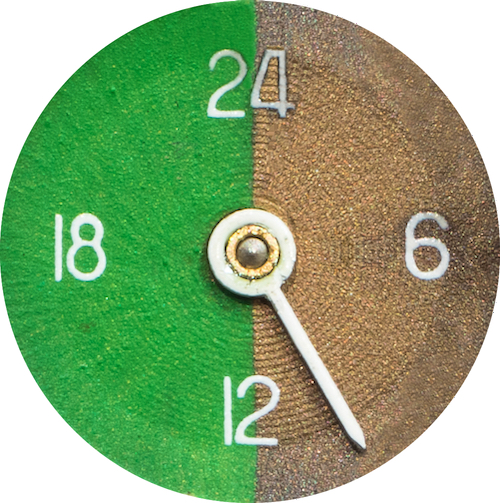 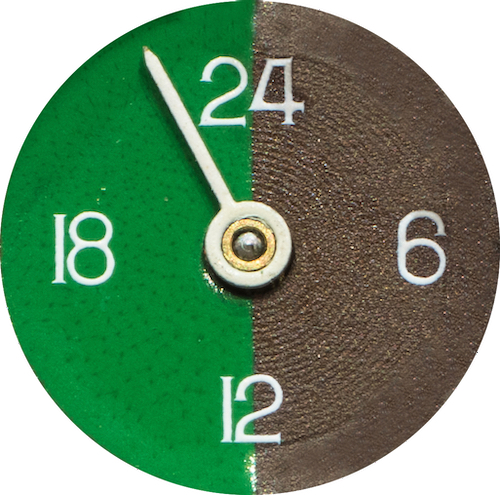 There are 3 pre-production dials.

They can be distinguished by the design of the SWISS MADE at the bottom of the dial:

• the first type (A1. Dash SWISS MADE) has dashes between SWISS MADE and the T labels indicating the use of tritium. It is interesting to note that the Flightmaster photo featured on the box and instruction manual for watches on sale has this particular typography. This shows that this dial was probably a pre-production variant by the dial-maker, Singer, that was not retained for the production version. This dial was made in two versions: the first has a slate-colored main zone and is thus identical to the one pictured on the box and the manual, while the other — the albino version — has the main zone in pale gray;

• in the second type (A2. Black SWISS MADE) the T SWISS MADE T inscription is identical to that of the later production models, but in black. The type A2 dials that we have seen are all pale gray;

• the third type (A3. Wide SWISS MADE) is characterized by the wide space between T SWISS and MADE T. 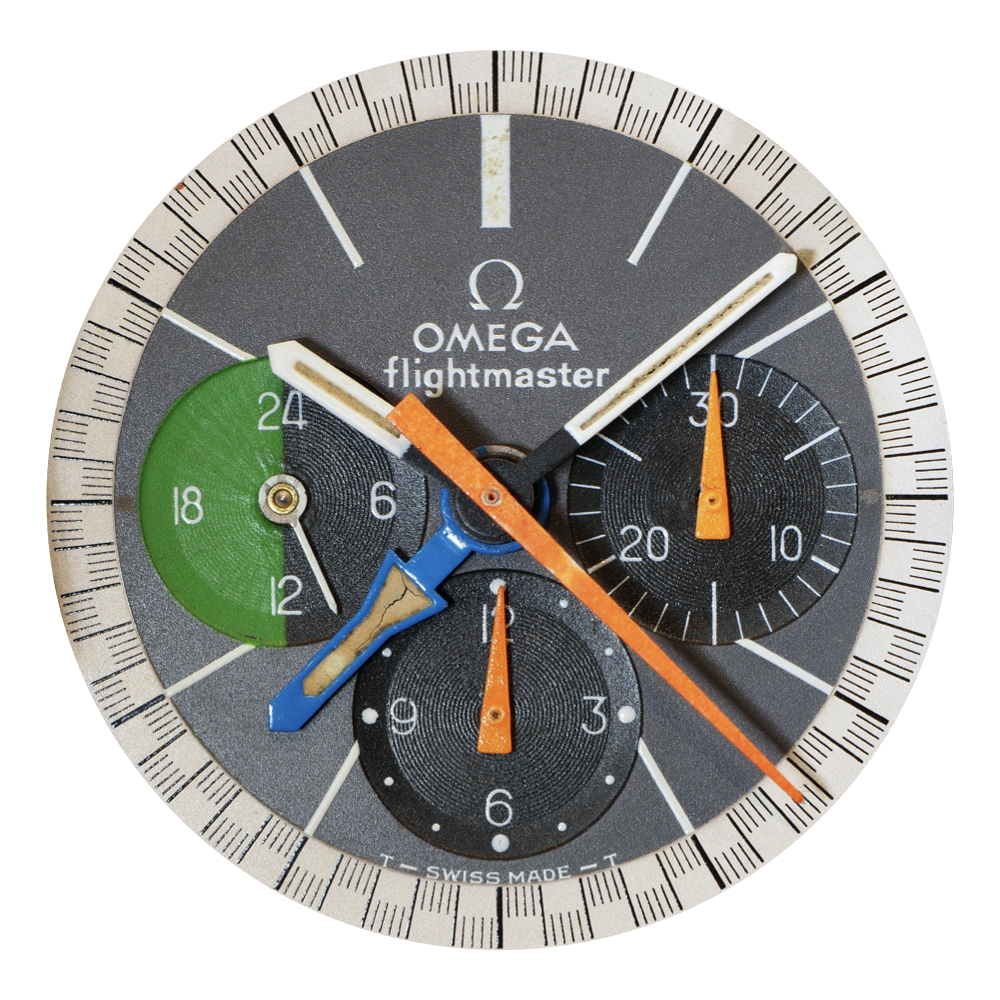 A1. Dash SWISS MADE.

Presence of dashes between SWISS MADE and Ts 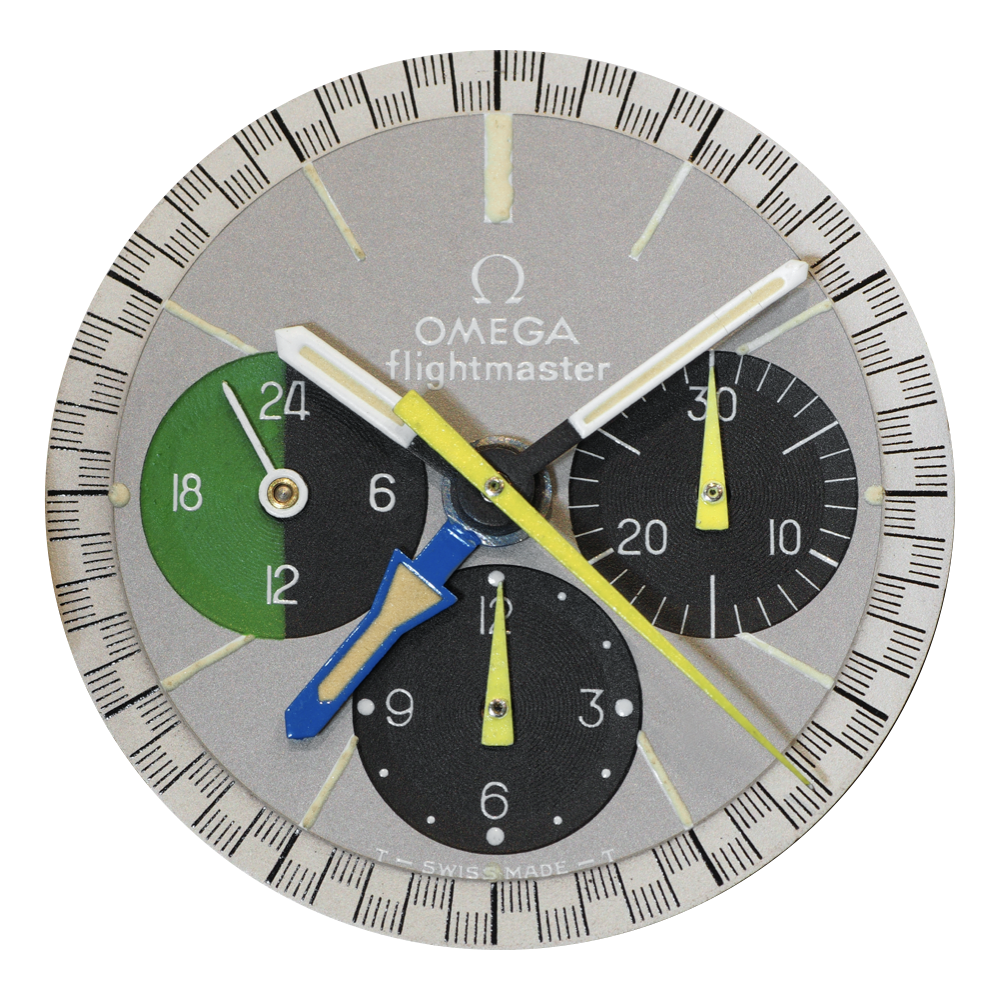 Presence of dashes between SWISS MADE and Ts 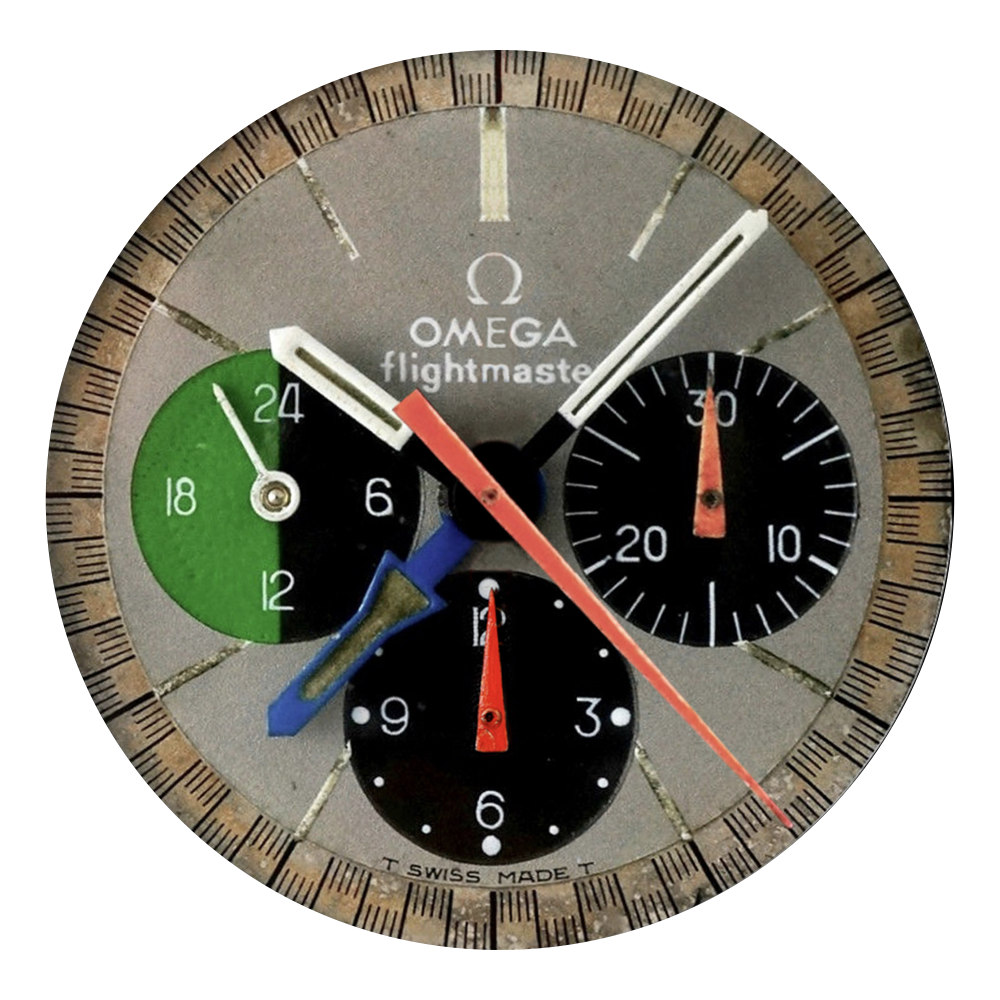 A2. Black SWISS MADE. 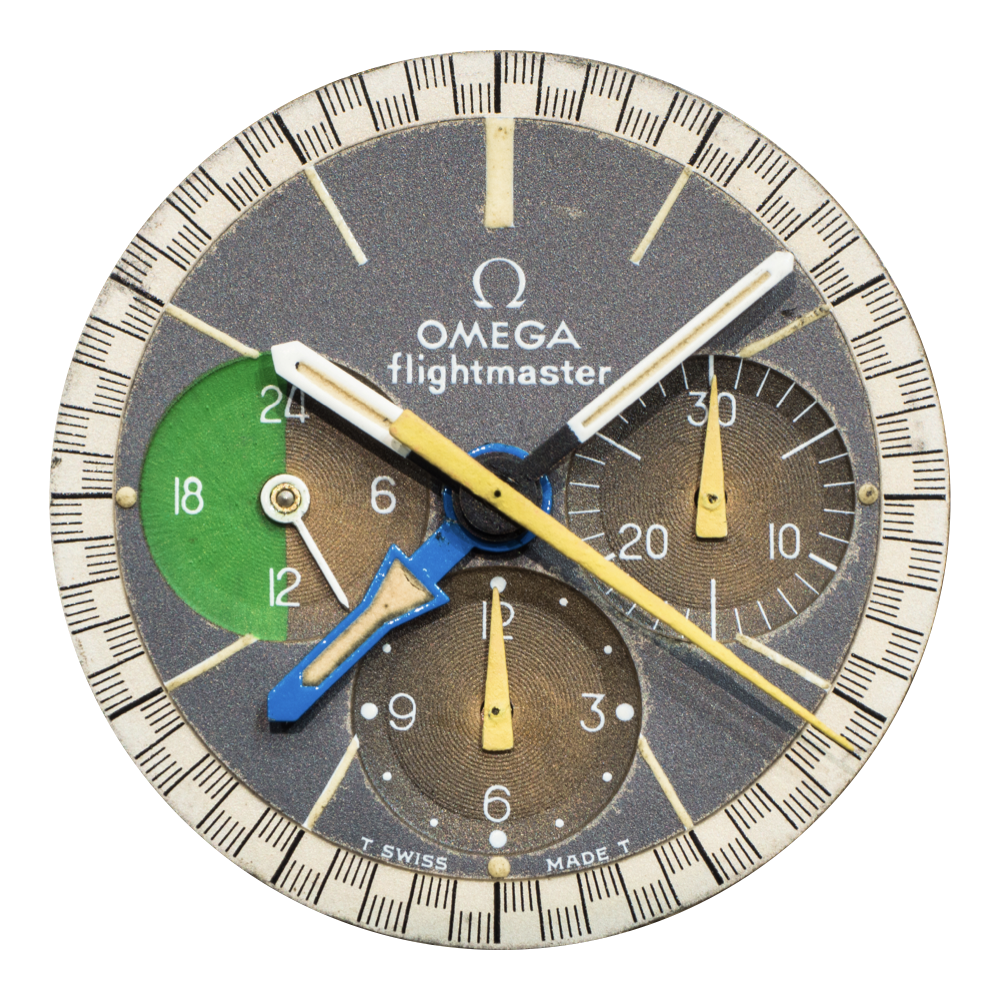 A3. Wide SWISS MADE.

Spaced T SWISS and MADE T

The first two types, A1. Dash SWISS MADE and A2. Black SWISS MADE are very rare. Fewer than five examples of each have been identified.

They might have been fitted to watches at the start of production, but this hasn’t been confirmed, and it is possible that they remained unmounted for some time.

Some of these early examples have no sales record in the OMEGA archives, proving that it was indeed a pre-series production dial made in very small quantities and fitted at the start of production. 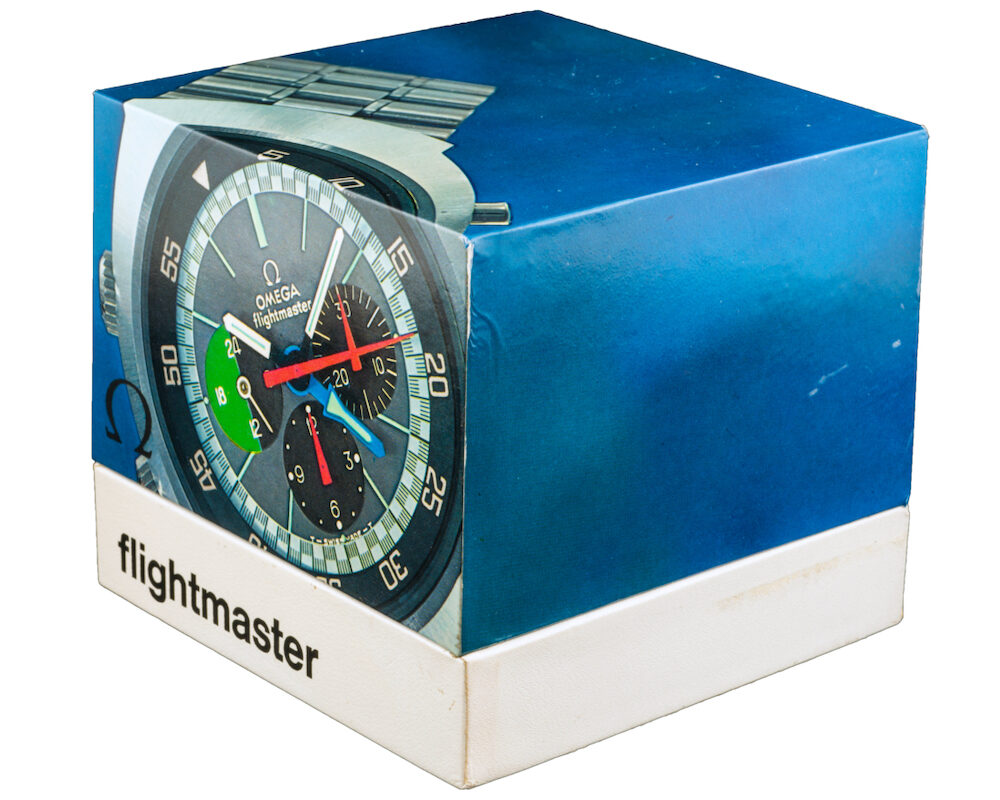 COMPARISON WITH THE PRODUCTION DIALS

• the first type (A4. 12 Without Dots) was used for the first 5,000 or so examples. Like the pre-production dials it has no tritium dots around the main marker at 12 o’clock;

• in contrast, the second type (A5. 12 With Dots) has two tritium dots, one on each side of the 12 o’clock marker, enabling quicker identification in the dark. 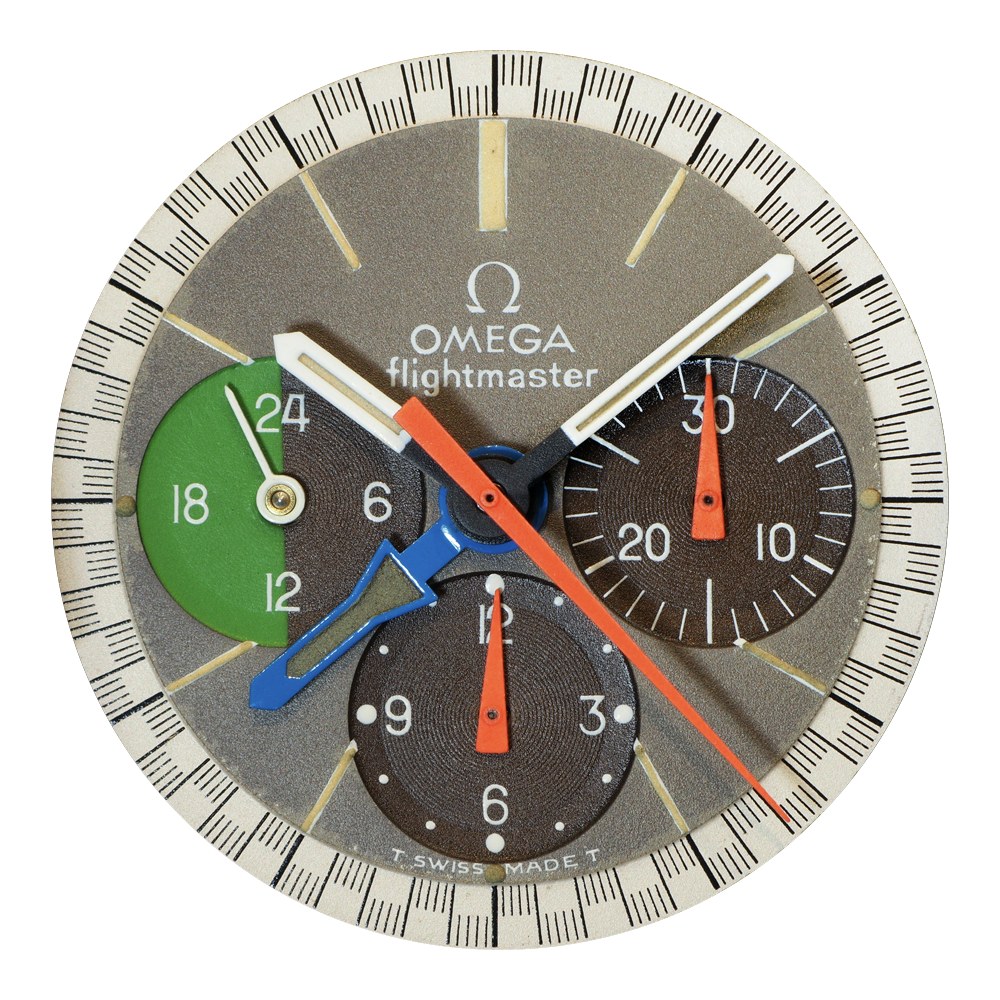 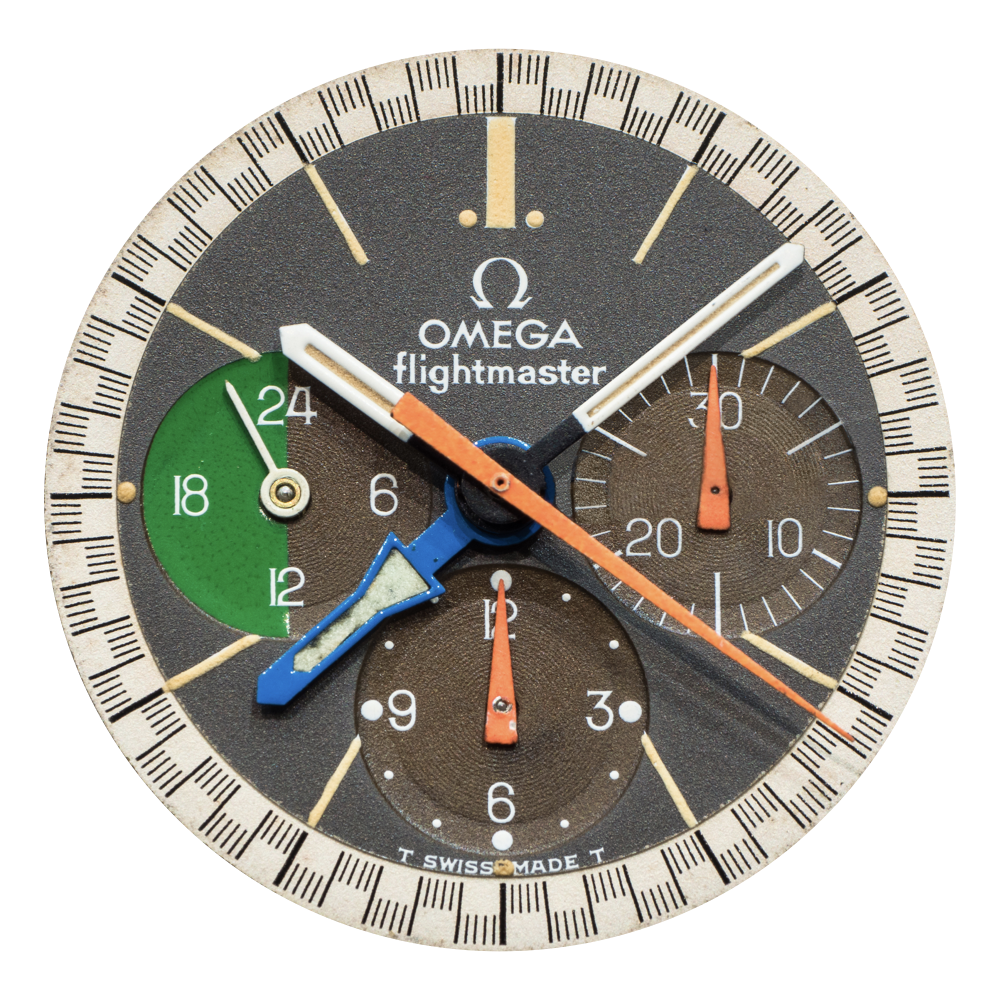 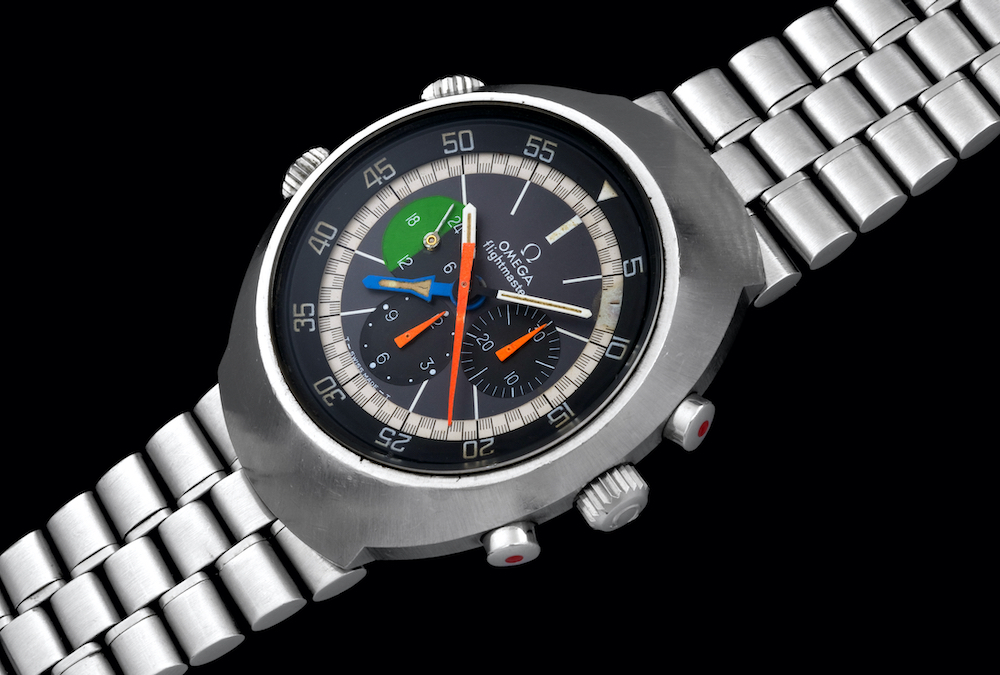 This ST 145 013 has two particular features: a type A1. Dash SWISS MADE pre-production dial (the same as that illustrated for the launch campaign), as well as the very rare red pushers of the first Flightmasters. This is to date the only model found with this dial. It is fitted with a 1159 bracelet with end pieces 155. 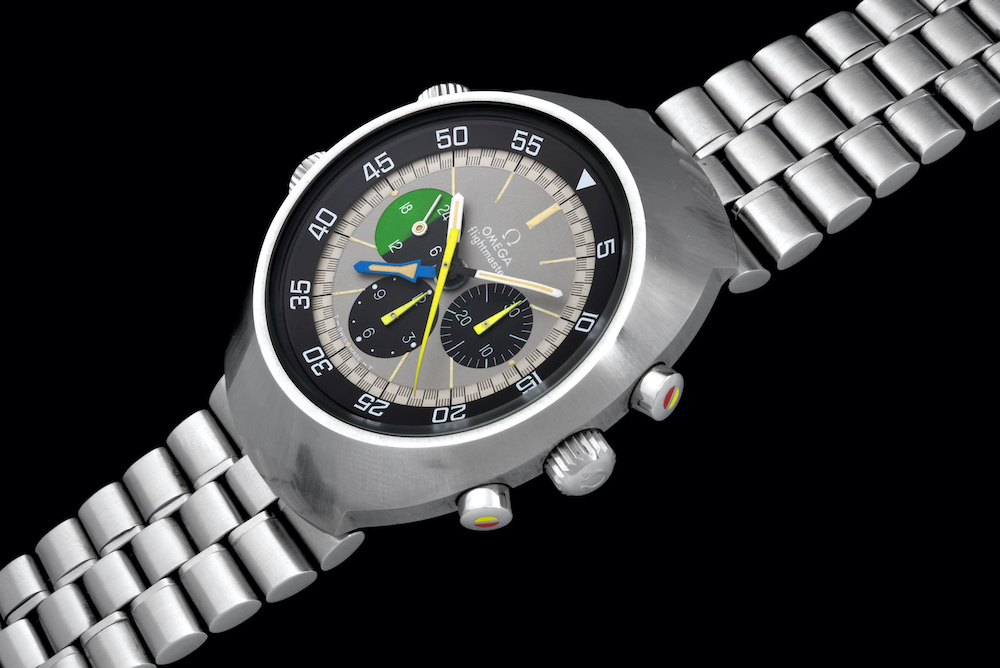 This model has a number of peculiarities: an extremely rare type A1. Dash SWISS MADE albino dial in excellent condition, a caseback lacking the reference to the patent application and the number 7 crudely engraved beneath the lug. These features suggest that the case, like the dial, could be from a pre-series production. 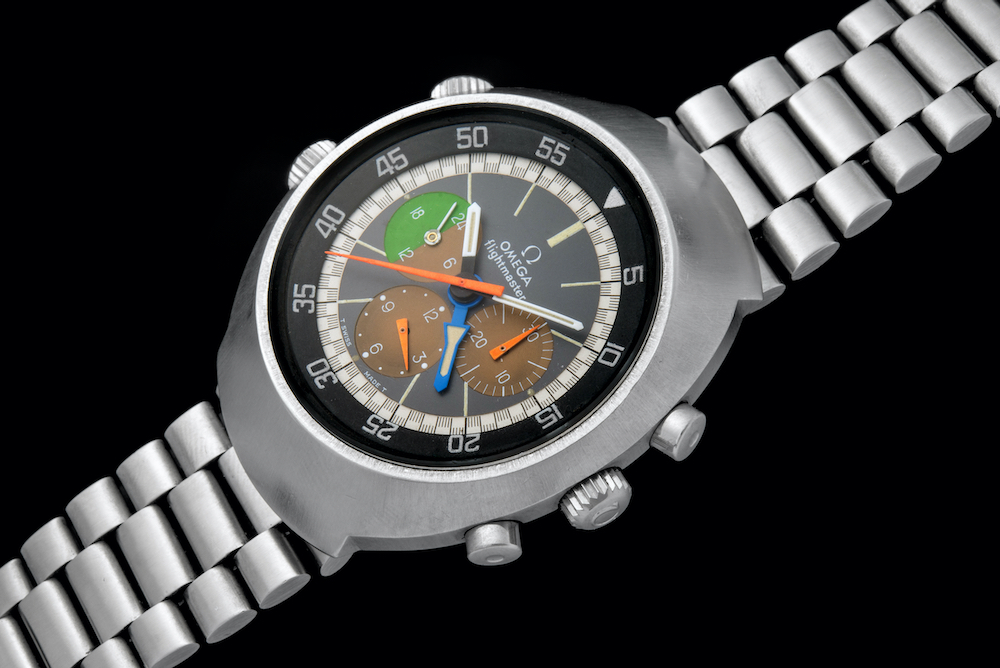 This model with serial number 29.13x.xxx is fitted with a Wide SWISS MADE dial. The subdials have turned a uniform light chocolate color, illustrating the unique character acquired by these models as they age. This watch is accordingly fitted with the rare pushers featuring single-color disks (the paint, which was certainly red at the time, has gone). This splendid Flightmaster was produced on September 10, 1969 and delivered in Switzerland. 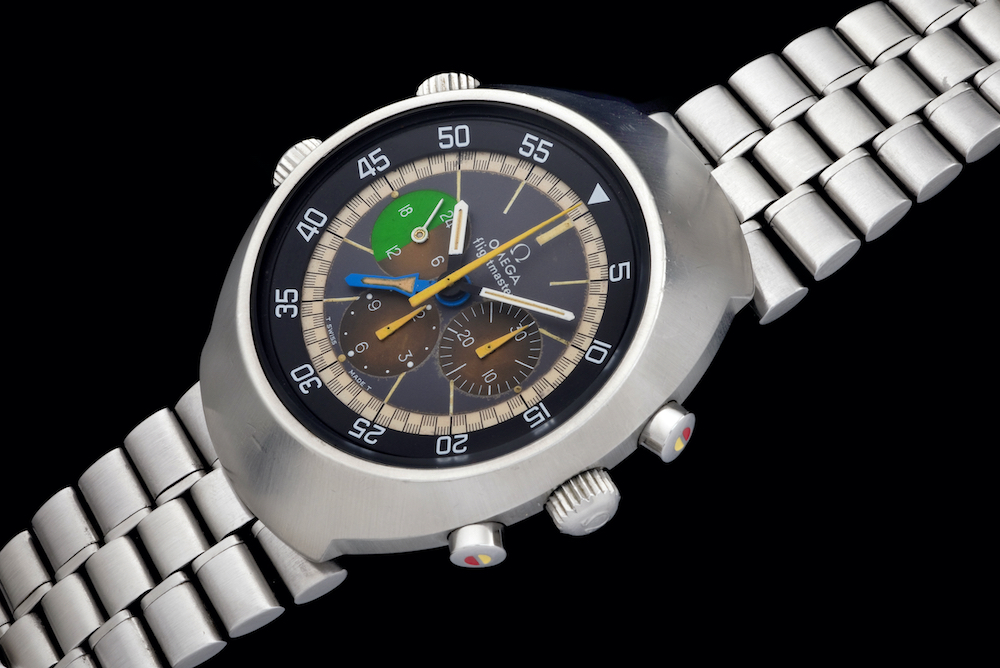 This represents the yellow-hand version of the model with the type A3. Wide SWISS MADE dial. This example, with its subdials in a fine, faded chocolate color, was produced on September 6, 1969 and delivered in Italy. 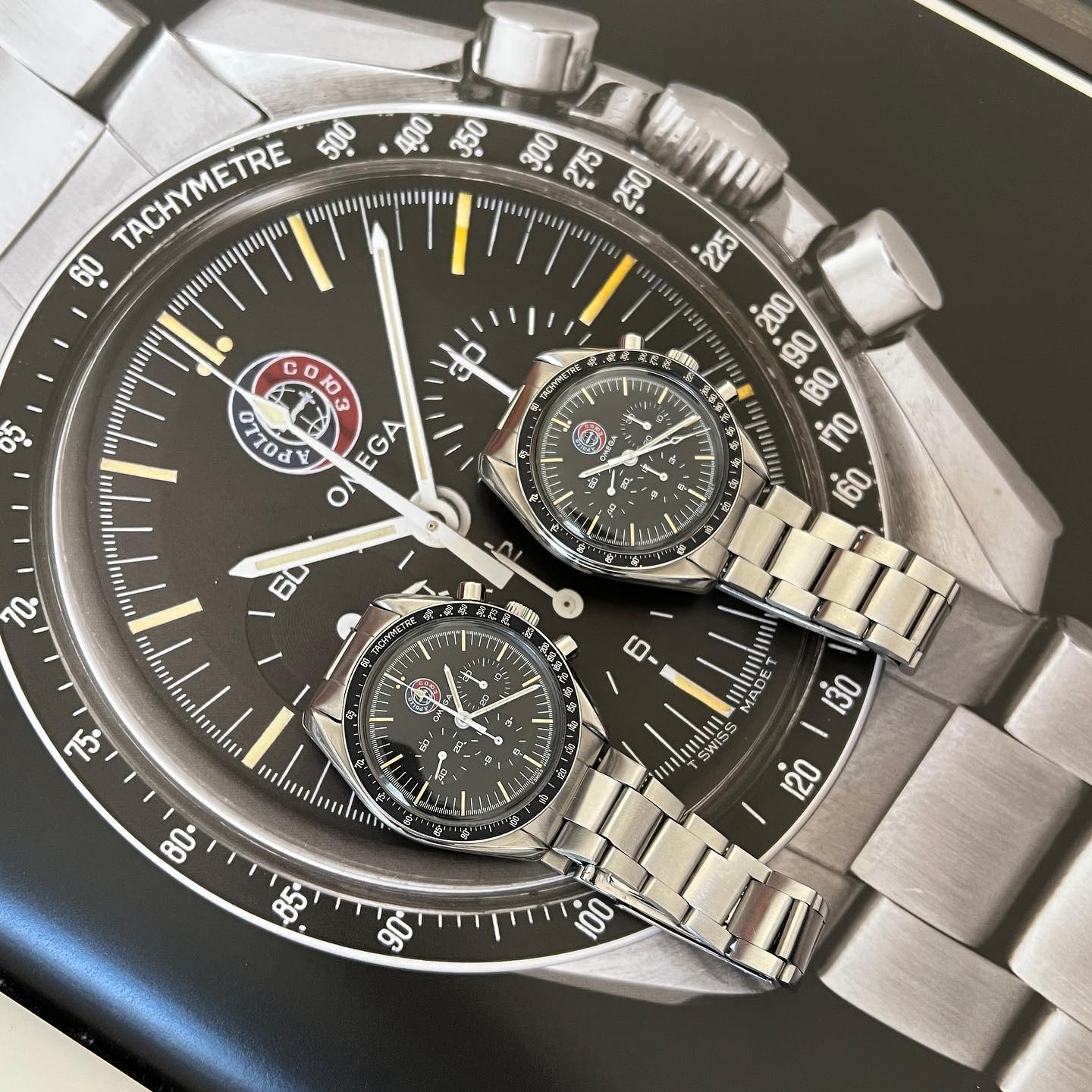 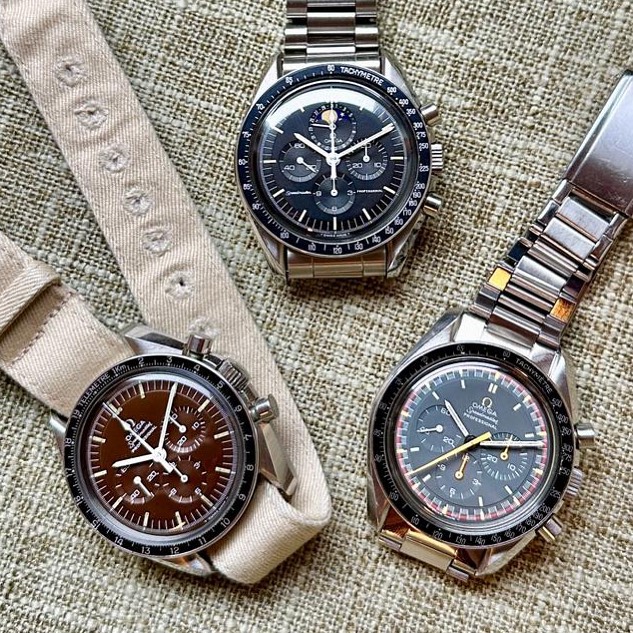 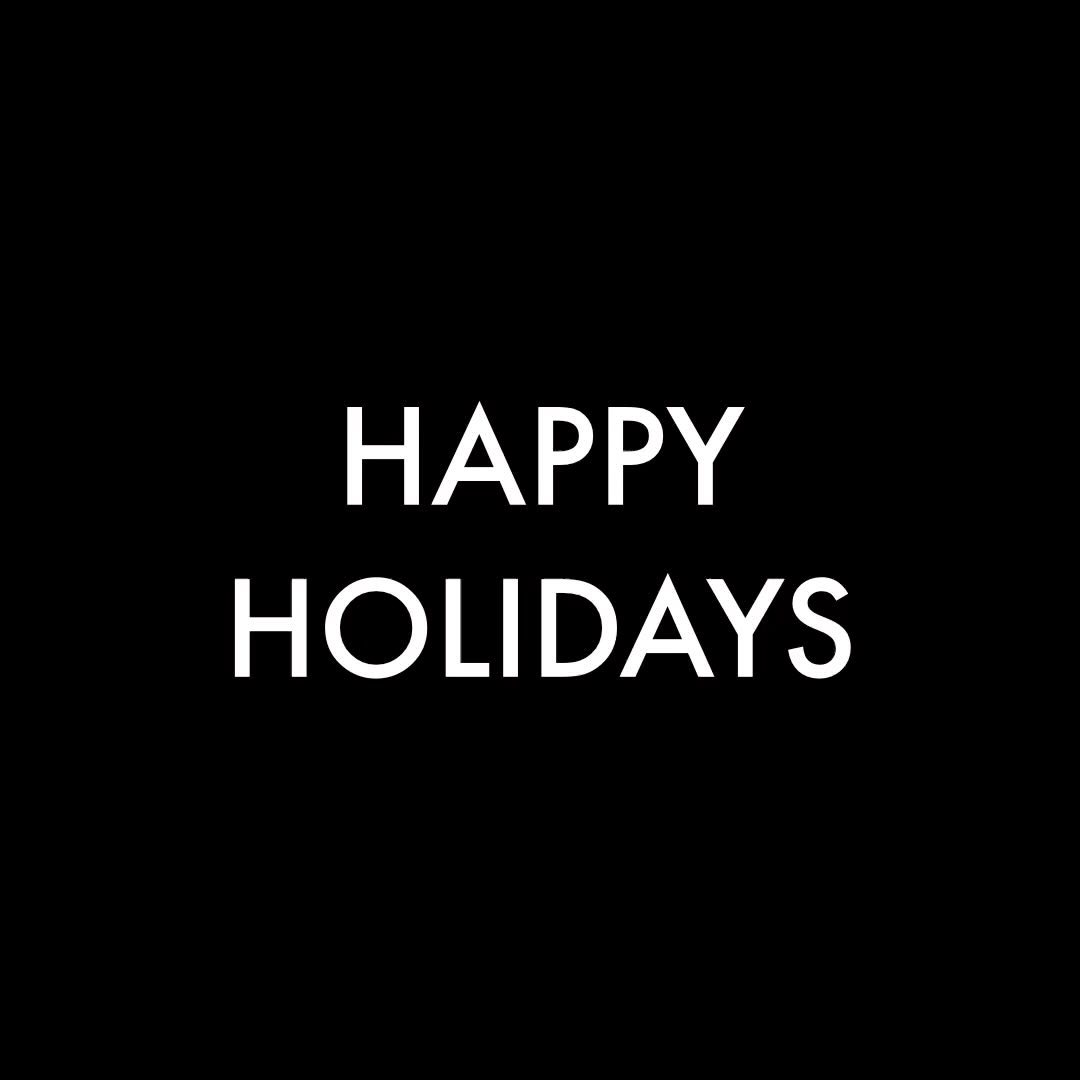 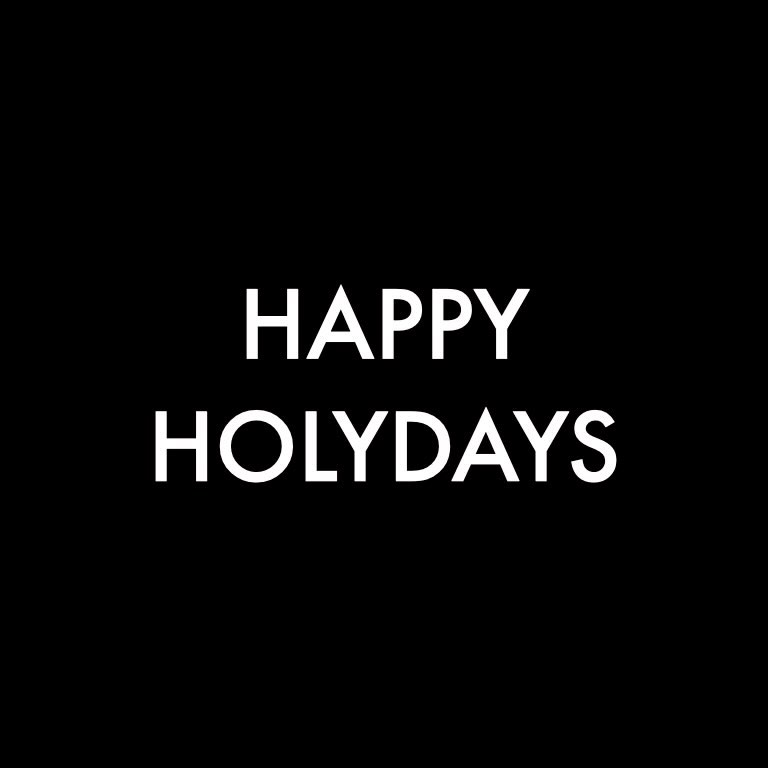