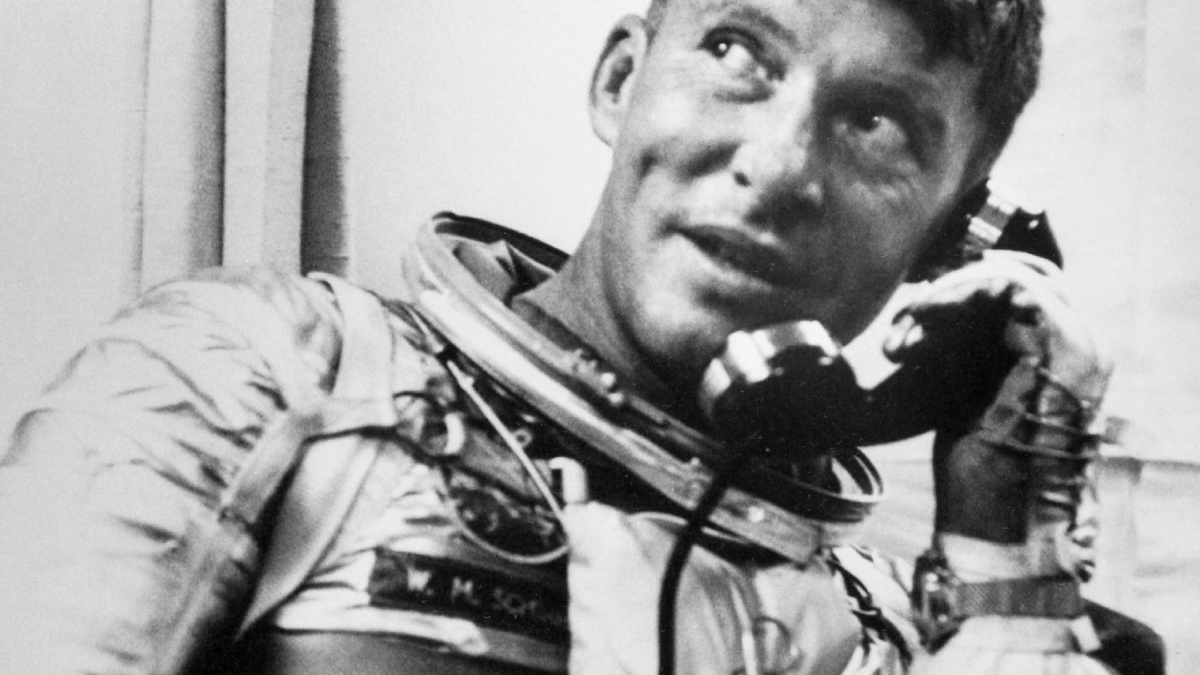 THE (REAL) FIRST OMEGA(S) IN SPACE

There are many legends and stories about the first steps of the Omega Speedmaster in the NASA history (prior to its first steps on the Moon, and in the History). As of today, the information has been cleared and many things have been explained about the NASA qualification of the Speedmaster: on March 1, 1965, the Speedmaster was the only watch to have withstood NASA tests, officially becoming Flight Qualified for all Manned Space Missions. The Speedmaster ST 105.003 would be the official watch of the Gemini missions, while the Speedmaster Professional ST 105.012, then ST 145.012 would officially equip the astronauts of the Apollo and subsequent missions, quite literally becoming the Moonwatch.

But these watches of 1965 were not the first Speedmasters in space. The story had started a few years before, in 1962.

Actually, it was not until the early 1960s that the unbreakable link between the Speedmaster and the conquest of space was created. In 1958, NASA began its space exploration program. The Mercury Program, as well as the official presentation of The Original Seven, the first seven selected astronauts, would mark the history of the American nation and formalize its epic journey into the future. 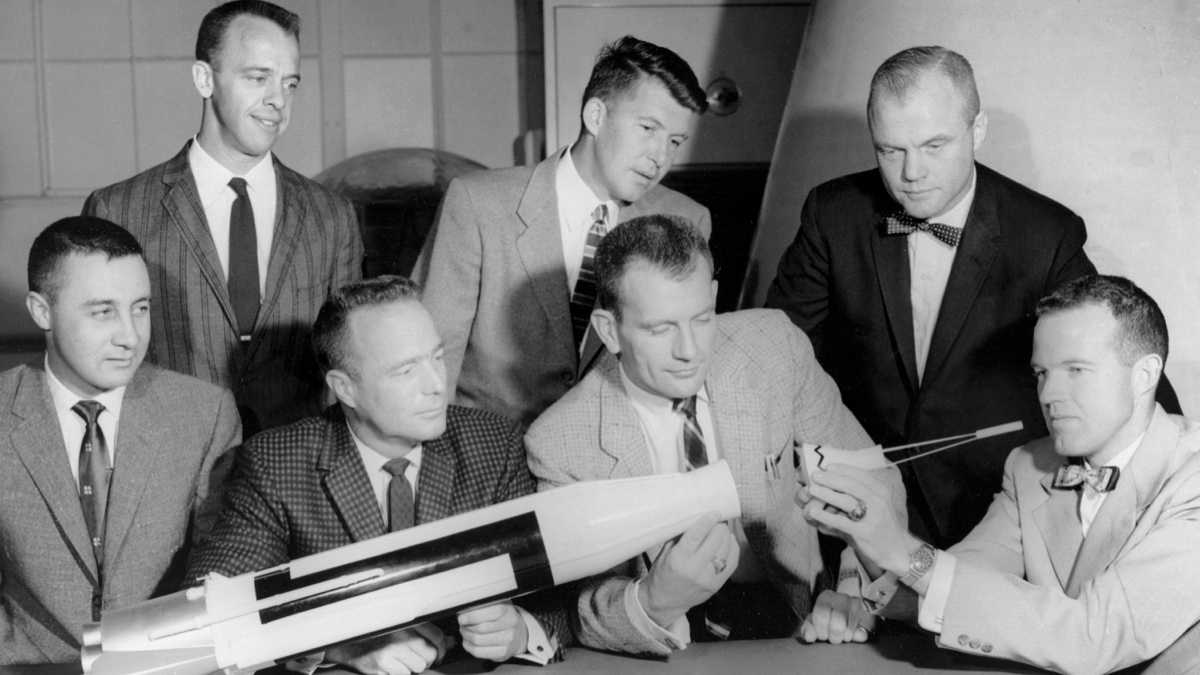 Project Mercury was the first human spaceflight program of the United States, running from 1958 through 1963. Its goal was to put a man into Earth orbit and return him safely, ideally before the Soviet Union. Taken over from the US Air Force by the newly created civilian space agency NASA, it conducted twenty uncrewed developmental flights (some using animals), and six successful flights by astronauts.

The program took its name from Roman mythology. The astronauts were collectively known as the “Mercury Seven”. Mercury flights were launched from Cape Canaveral Air Force Station in Florida. The flights were designed to be controlled from the ground via the Manned Space Flight Network, a system of tracking and communications stations. Small retrorockets were used to bring the spacecrafts out of their orbit, after which an ablative heat shield protected them from the heat of atmospheric reentry. Finally, a parachute slowed the crafts for a water landing. Both astronauts and capsules were recovered by helicopters deployed from a US Navy ship.

All of the six manned Mercury flights were successful:

MR = Mercury-Redstone (suborbital flights).
MA = Mercury-Atlas (orbital flights).
The astronauts then followed a pilot tradition, each giving their spacecraft a name: they selected names ending with a “7” to commemorate the seven astronauts.
The launch vehicles had been tested through unmanned flights, therefore the numbering of the manned missions did not start with “1”.

You will find further interesting information on Wikipedia. 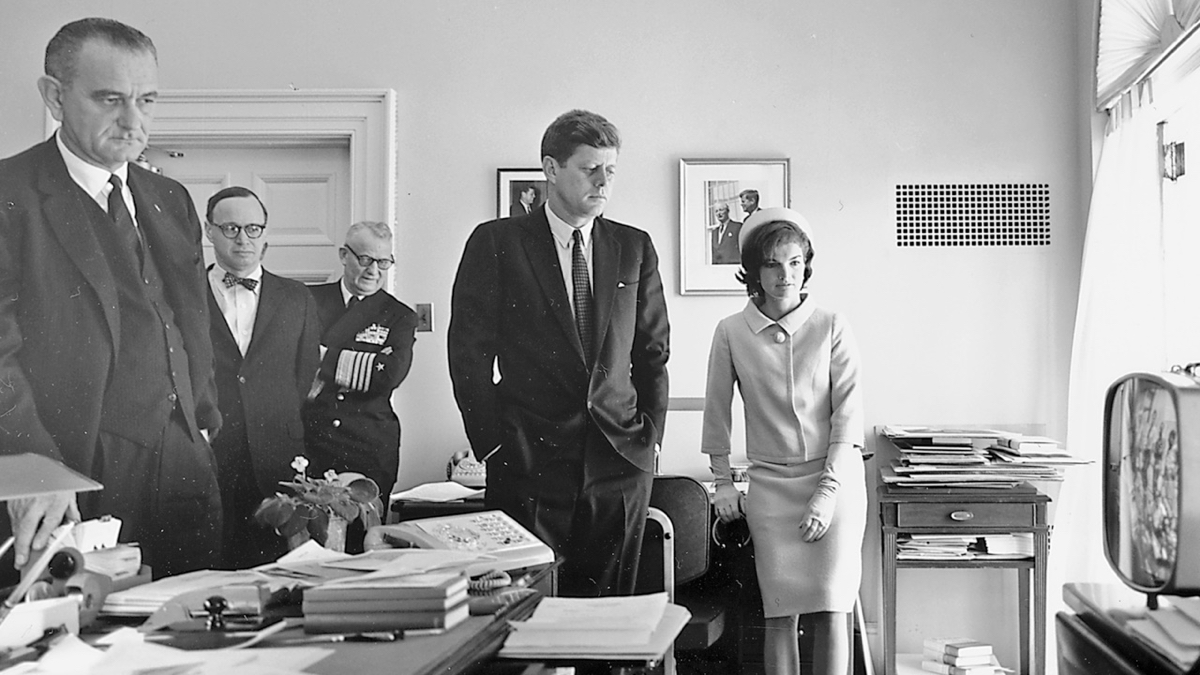 As the prospect of the first manned space flights drew closer, the question of astronaut equipment became increasingly important. Logically, at a time when computers were in their infancy, one of the instruments mentioned was a reliable wristwatch, capable of backing up the main measuring systems if necessary. However, at this point in its history, NASA did not yet consider it necessary to equip its crews with an official watch. It therefore left it up to them to choose and buy their own watches.

That is why in 1962, a group of astronauts, including Walter “Wally” Schirra, Gordon “Gordo” Cooper, and probably Donald Kent “Deke” Slayton decided to buy wristwatches privately. In search of a reliable, readable and robust chronograph, they chose the Omega Speedmaster.

This personal decision would change the destiny of this chronograph forever, and probably also the history of the brand.

The Speedmaster was equipped with an extremely high-performance mechanism developed in the 1940s by Omega’s sister company Lemania. It also featured a timeless design and some fundamental innovations such as an external tachymeter bezel to improve readability. Thanks to its intrinsic qualities, the Speedmaster proved an immediate success. It was well appreciated by a clientele of individuals and professionals who were delighted to have an innovative, solid and reliable measuring instrument on their wrist.

The model available for sale at that time was reference CK 2998, the second generation of Speedmaster.

Mercury-Atlas 8 was the fifth United States crewed space mission. Astronaut Walter M. Schirra Jr., orbited the Earth six times in the Sigma 7 spacecraft on October 3, 1962, in a nine-hour flight focused mainly on technical evaluation rather than on scientific experimentation. This was the longest U.S. crewed orbital flight yet achieved in the Space Race. It confirmed the Mercury spacecraft’s durability ahead of the one-day Mercury-Atlas 9 mission that followed in 1963. 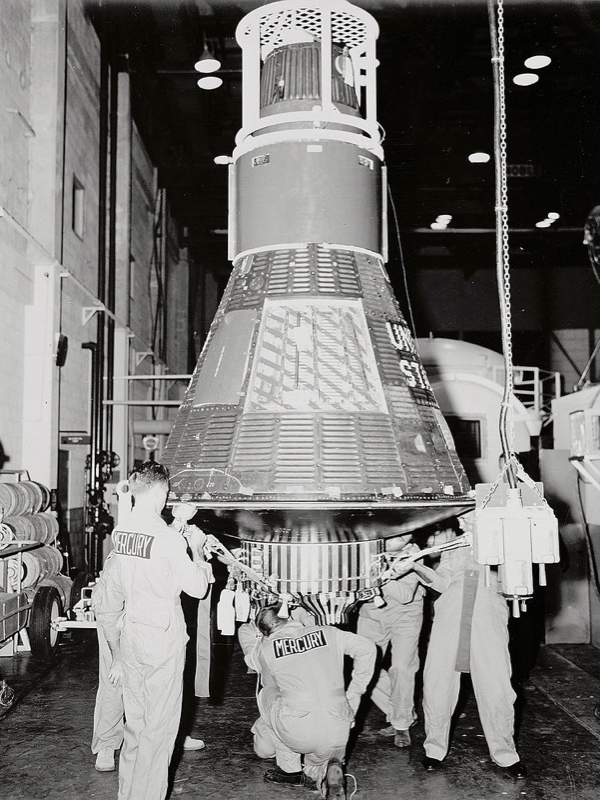 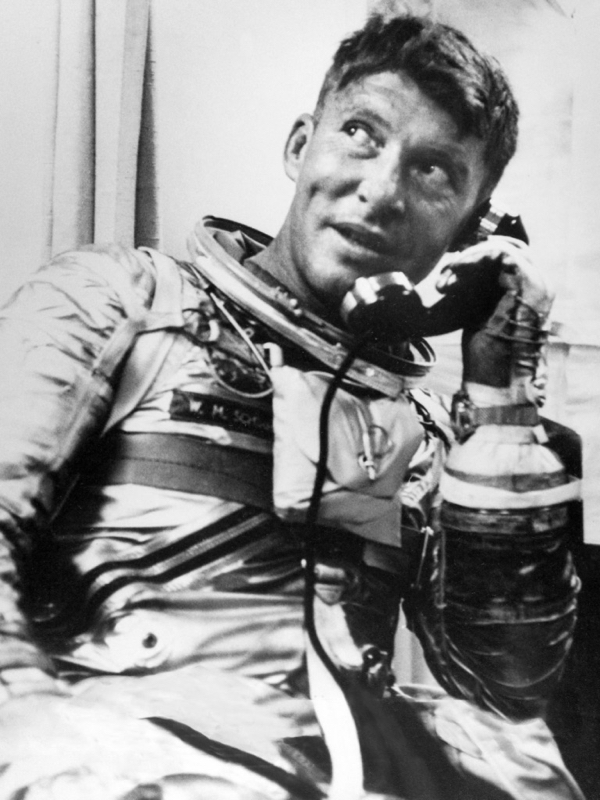 October 1962. The Omega Speedmaster CK 2998-4 clearly visible on the inside of Wally Schirra’s left wrist while talking on the phone onboard recovery ship USS Kearsarge after the MA-8 mission.
Credit: NASA.

A few other pictures of Schirra during different training sessions or meetings show his Omega Speedmaster in 1962 (some of them showing that he was also wearing a Bulova Accutron model). Note that Wally Schirra was the only astronaut to have flown Mercury (8), Gemini (6) and Apollo (7) missions. 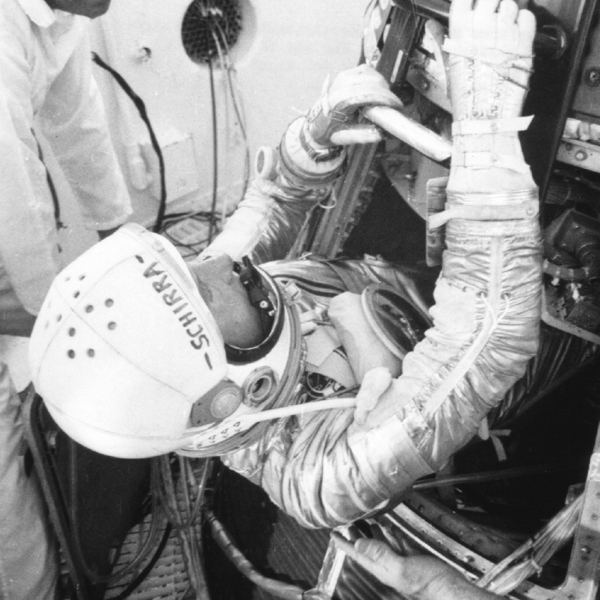 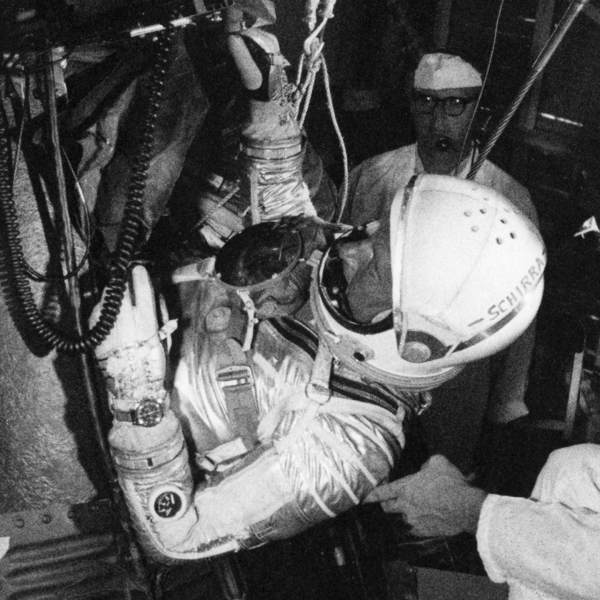 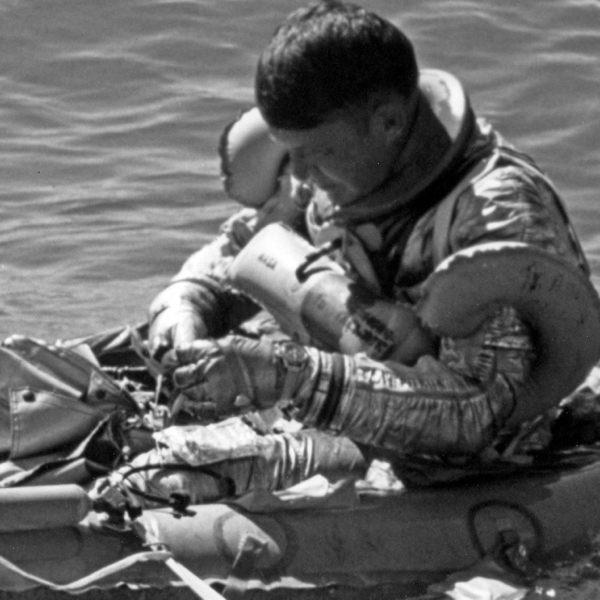 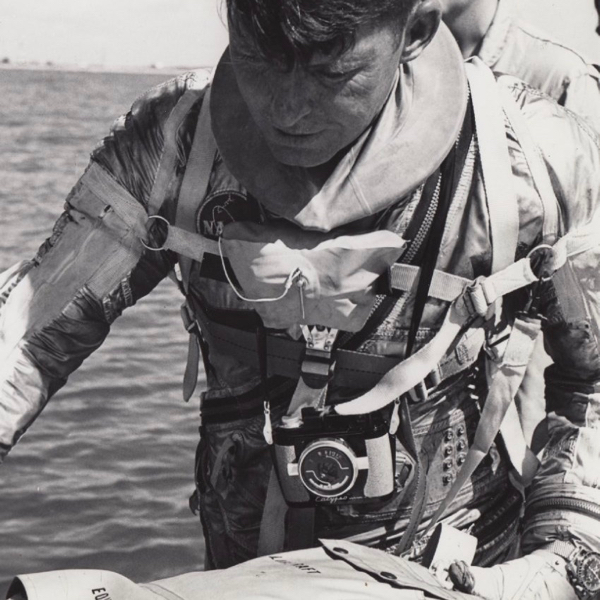 May 1962. Wally Schirra during water egress training as all Mercury missions ended in a splashdown in the ocean. On his wrist, his personal CK 2998.
Credit: NASA. 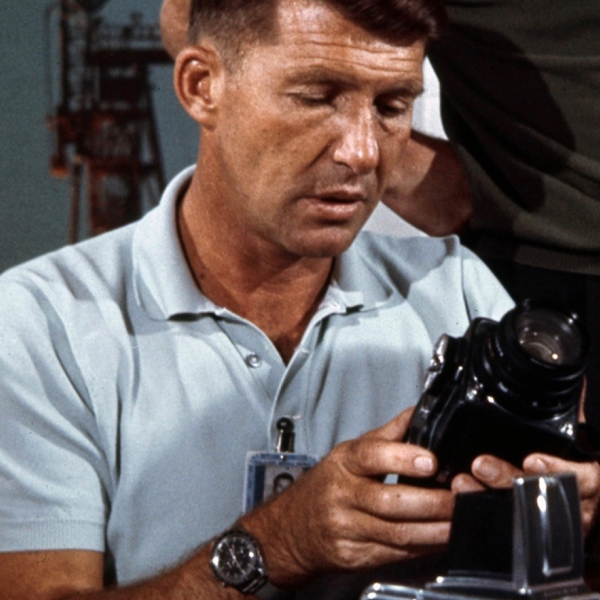 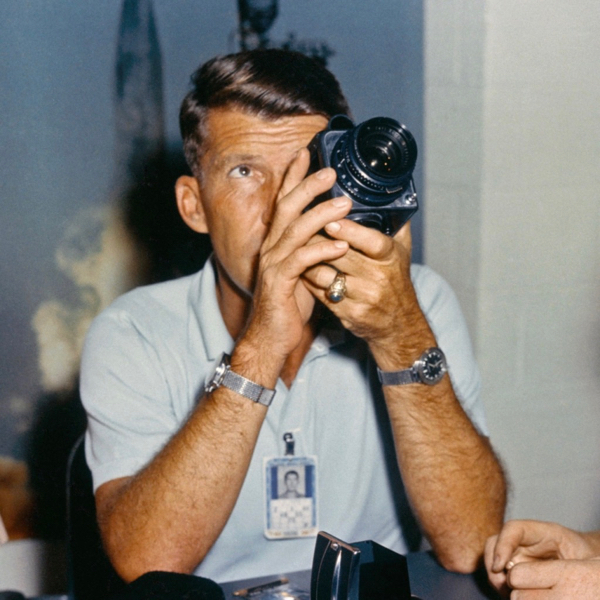 1962. Wally Schirra tries out the Hasselblad 500C camera which he will use during the MA-8 “Sigma 7” mission. He’s wearing his personal Omega Speedmaster CK 2998-4 and a Bulova Astronaut on his right wrist.
Credit: NASA.

Mercury-Atlas 9 was the final crewed space mission of the U.S. Mercury program, launched in May 1963 from Launch Complex 14 at Cape Canaveral, Florida. The spacecraft, named Faith 7, completed 22 Earth orbits before splashing down in the Pacific Ocean, piloted by astronaut Gordon Cooper. This mission marks the last time an American was launched alone to conduct an entirely solo orbital mission. 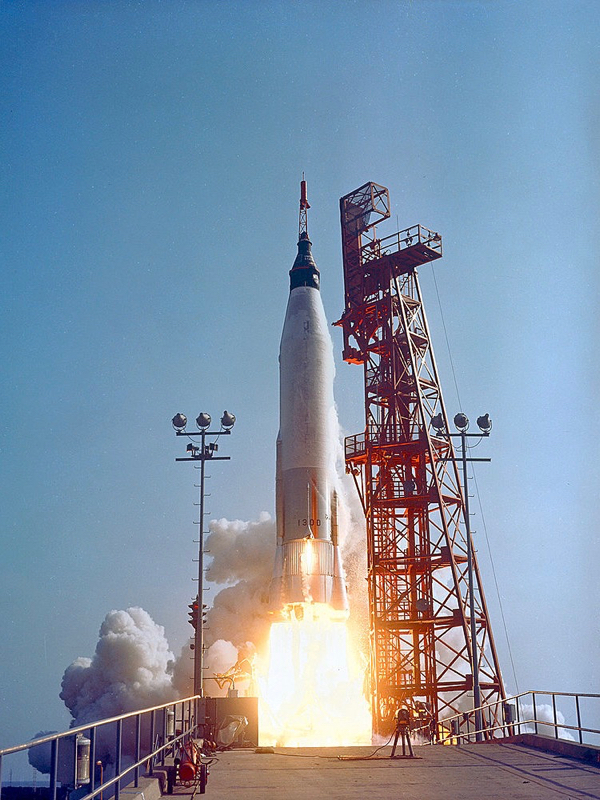 May 15, 1963. Mercury-Atlas 9 lifts off from Pad 14 at Cape Canaveral with astronaut L. Gordon Cooper aboard “Faith 7” for the nation’s longest manned orbital flight.
Credit: NASA. 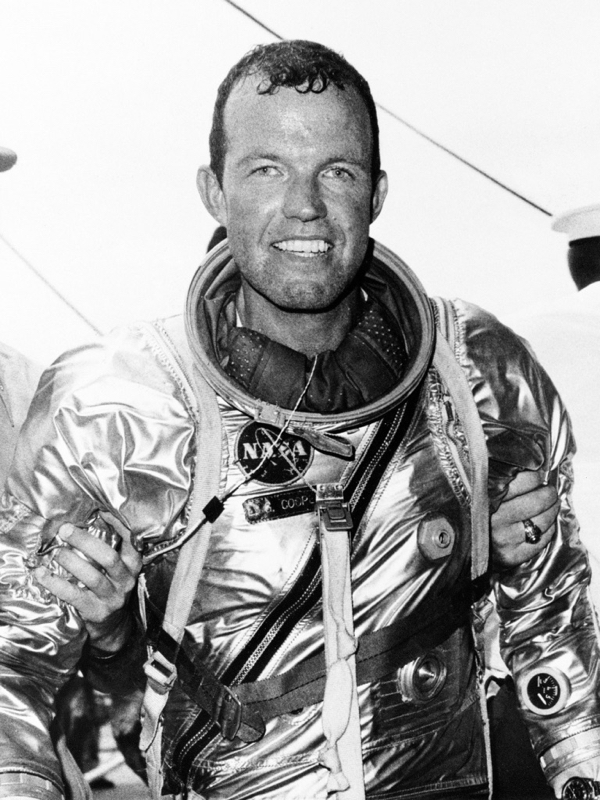 May 16, 1963. Cooper seen across the deck of the USS Kearsarge after recovery from his 22-orbits around the Earth, with his Speedmaster CK 2998-4 on the inside of his left wrist.
Credit: NASA.

There are many pictures of Cooper during training and tests sessions before the “Faith 7” mission. He is always wearing his personal watches, usually the Speedmaster on the left and the Bulova Accutron on the right. Note that Gordon Cooper was part of the Gemini 5 mission too. 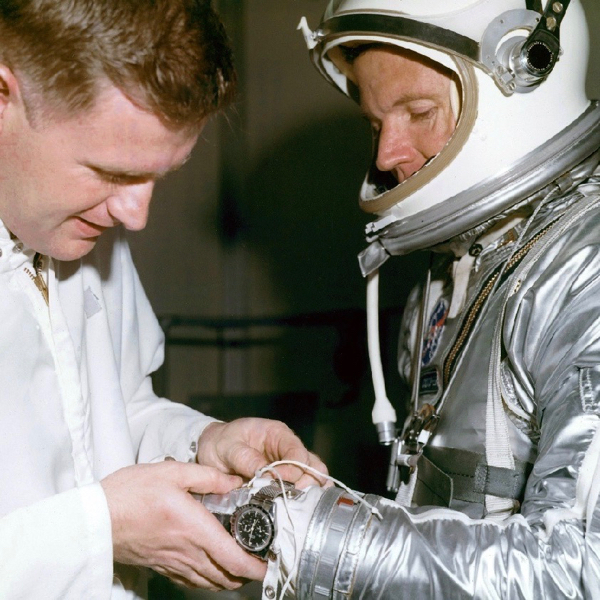 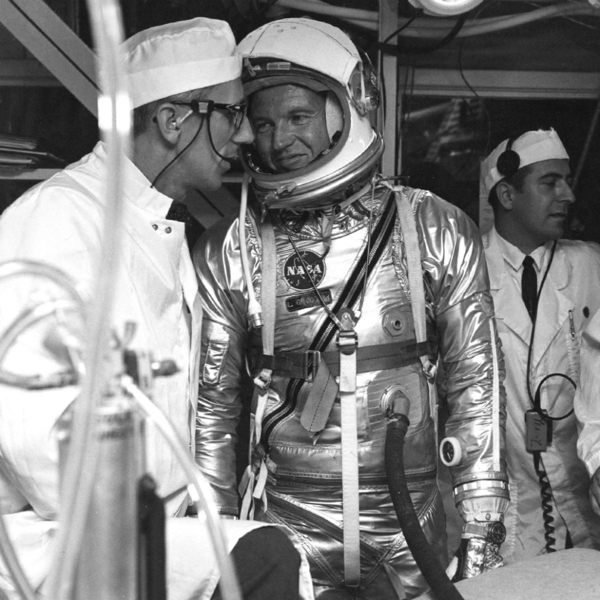 1963. Gordon Cooper during flight simulations for the “Faith 7” mission. Cooper wore both his personal watches, a Speedmaster CK 2998-4 and a Bulova Accutron Astronaut.
Credit: NASA. 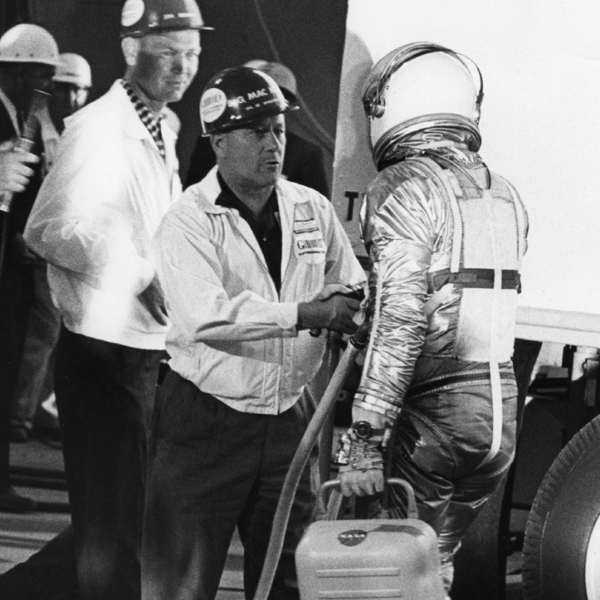 May 15, 1963. Gordon Cooper seen before the launch of the “Faith 7” Mercury mission, wearing his Speedmaster CK 2998-4 and his Bulova Accutron Astronaut.
Credit: NASA. 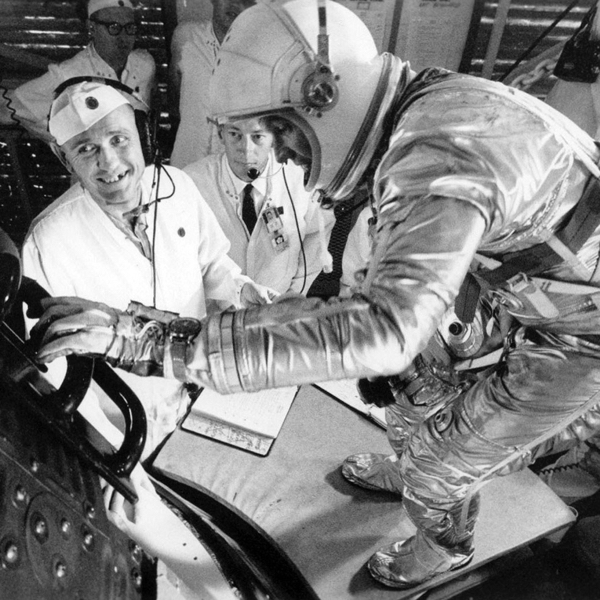 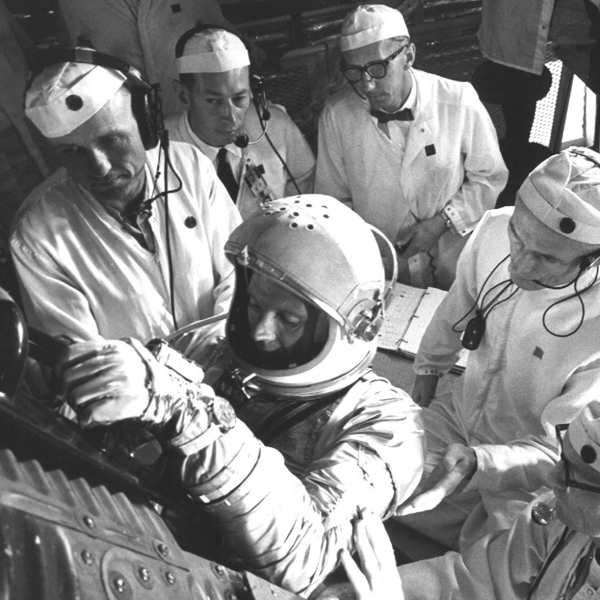 One of The Original Seven, “Deke” Slayton, had been diagnosed by doctors with a slight heart murmur that prevented him from flying. He was then given responsibility for the assignment and supervision of the crews. At the request of his astronauts, Deke will launch a bid for tender to select a standard issue watch for the next Gemini and Apollo flights, asking the engineer James Ragan to carry out the selection: this will lead to the NASA tests and the official qualification of the Speedmaster.
But earlier in 1962, he was probably the third man to purchase privately a CK 2998 together with Cooper and Schirra. This Speedmaster could have been among the first ones in space if Slayton had flown on a Mercury mission. There is at least one picture showing Deke Slayton wearing the watch during a jungle survival training in Panama, in June 1963.

June 1963. Photo of Donald K. Slayton, taken during a jungle survival exercise in Panama. He wears his personal Speedmaster CK 2998 (without its bezel).
Credit: NASA.

Please note that many information and pictures have been found on the Moonwatchuniverse blog. Philip, the founder and manager of this blog (read his interview here), has conducted a tremendous research and has gathered a huge pictures database. We are very grateful to him and his passion.